EVP Mills: “It’s been helpful to hear what community members think of the sites.” 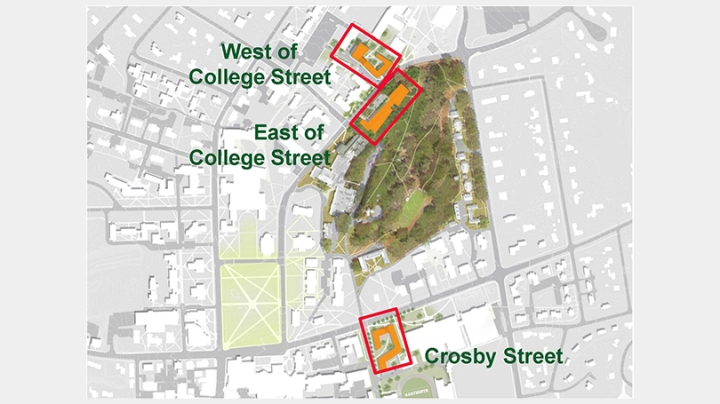 Identified as potential locations for a 350-bed residence hall are three sites: one west of College Street, one on the east side of College Street, and one at the intersection of Crosby and East Wheelock streets. (Graphic courtesy of Dartmouth Campus Services)
8/22/2018
Body

Faculty, staff, students, alumni, and people living or working in Hanover weighed in on three potential sites for a new 350-bed undergraduate residence hall at three informational sessions, the last of which was held Monday evening. Others participated in the sessions through online streaming of the meetings.

“It’s been helpful to hear what community members think of the sites,” says Executive Vice President Rick Mills. “There are many factors involved in choosing a building location, and the input we’ve heard will aid in our formulation of a proposal to move the project forward.” 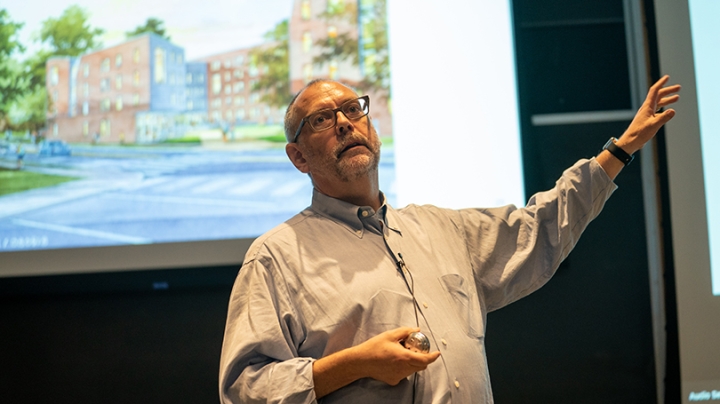 Executive Vice President Rick Mills discusses the site options at one of the informational sessions. (Photo by Eli Burakian ’00)

Administrators will select a site and begin the design and evaluation phase of the work, which will be presented to Dartmouth trustees at the board’s meeting next month, Mills told those at the sessions.

The three locations under consideration are:

• The corner of Crosby and East Wheelock streets, where three tennis courts and the house community social space informally known as “the onion” would need to be removed;

• Empty land on the west side of College Street, between Dana Hall and the McLaughlin cluster, where Gilman Hall was taken down earlier this year;

• The east side of College Street, across from the McLaughlin cluster, where a small parking lot and the Dragon Society building are located.

While one of the sites will be chosen for a new residence hall, it is likely that the other two locations will be considered for future building projects, Mills says.

“Looking at what’s available to use in the future is part of the ongoing growth and evolution of our campus,” he says.

Here’s a sampling of comments about the locations from the informational sessions:

• Crosby Street: the site would bring more traffic to an already-busy intersection and a busy part of town; adds residence space near the gym, which some said was positive and others said was not; is the closest of the sites to existing dining options; adds vibrancy to the downtown

• West side of College Street: there is less vehicular traffic than at the other sites, which is a plus for pedestrians; adds residence space near existing residence halls; there would be no need to remove structures in order to build at this location

• East side of College Street: the site is far from existing dining locations; the College should avoid building in College Park (the property is on the north-western edge of the park); it’s difficult for pedestrians to cross College Street; would take away existing parking spaces; would limit expansion of science buildings in that part of campus

Additional comments on the sites can be emailed to the Planning, Design & Construction team. Progress on the project can be seen on the Campus Services website.

Mills said funding for the new construction would come from funds yet to be raised.

Adding more undergraduate bed space has been under discussion for a number of years and would begin what would likely be a decade of renovation and renewal of existing residence halls, as well as the possible closure of some buildings.

Undergraduate residence halls, with a total of just under 3,100 beds, have been at capacity for several years and there is not enough bed space to meet the fall term demand. The lack of space has kept the College from addressing deferred maintenance in existing residence halls, as such work requires closing a building for at least a year and using what campus planners call “swing space” to house students while the work is being done. A new residence hall would create the needed swing space.

After the renovation of a number of buildings, when swing space is no longer needed, the new hall could accommodate one of the house communities in Dartmouth’s house system, which begins its third year next month.

In February, the College decided not to move forward with consideration of plans to build residence halls to accommodate 750 undergraduates, opting instead to explore development of a smaller project.

The most recent residence halls to be built, in 2006, were Fahey McLane, which houses 161 students, and the McLaughlin Cluster, with a capacity of 341. The added bed space in those buildings created swing space that allowed for the renovation of Hitchcock Hall and New Hampshire Hall in 2008-09. But the swing space no longer exists in the system. About half of the undergraduate housing on campus has not been renovated in more than 15 years.

Description
GMA3: What You Need to Know features Green2Go co-founder and executive director Amanda Sun ’23 in a segment about the nonprofit’s work to bring reusable food containers to college campuses, cutting down on single-use plastics and fossil fuels.
Good Morning America
Articles 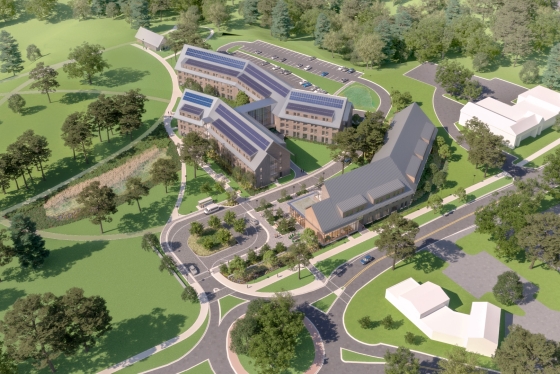