Chenell Tillman-Brooks and Callie Brownson will serve as coaching interns during preseason camp. 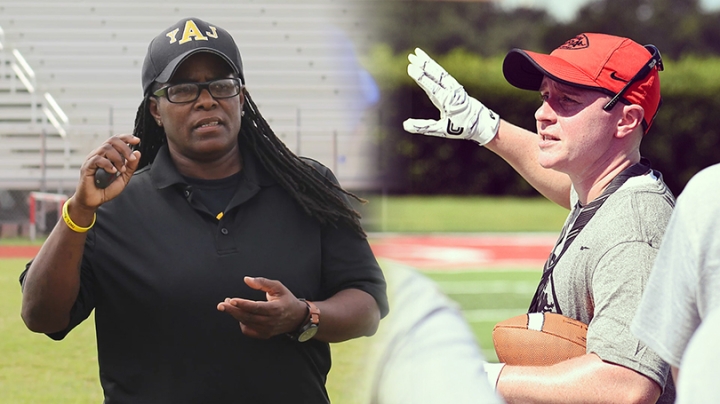 Chenell Tillman-Brooks, left, and Callie Brownson will be full members of the coaching staff for the first two weeks of preseason camp. (Photo illustration courtesy of Austin Yellow Jackets and Dana Sparling)
8/16/2018
Body

The two will be full members of the coaching staff for the first two weeks of preseason camp. Due to NCAA regulations, they will not be allowed to instruct on the field, but they will take part in all of the team activities, from meetings on the recruiting process, strength and conditioning, practice and game planning, and film evaluation, as well as staff meetings and personnel discussions. They will have a presence on the field during practices, however, supporting and organizing drills, providing offensive and defensive looks to give context, and offering feedback to the staff.

Tillman-Brooks and Brownson first came to Teevens’ attention when he hired them to coach (along with 14 other women) at a women’s clinic and one-day camp at the Manning Passing Academy. The idea was to have women coached by other women, and Teevens came away impressed by the staff members.

“I was tremendously impressed with the enthusiasm, energy, professionalism, expertise and knowledge the collective group had,” Teevens says. “After the conclusion of the camp and clinic, I spoke with a lot of them about their football plans down the road, and a number of them mentioned they would like to further get into coaching football. I discovered that there are likely hundreds of females coaching at the Pop Warner level, so why not help them get access to as much knowledge and expertise on the game and player safety as possible?”