After more than 13 years as Thayer School dean, Helble readies for provost role. 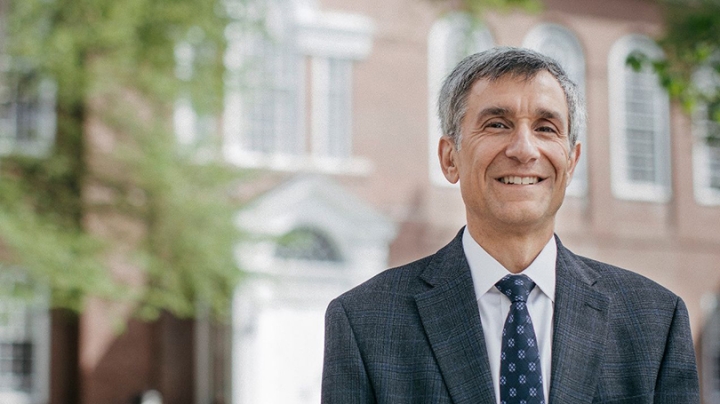 “I think over the course of the first several months I’m going to be doing a lot of listening,” says Professor Joseph Helble, who takes over as provost on Monday. (Photo by Robert Gill)
10/24/2018
Body

For 13 years, the faculty, staff, and students who have passed through Thayer School of Engineering have called Joseph Helble “dean.” To those in his early-morning running group he’s just Joe. On Monday, Helble takes on a new title. Call him Provost Joseph Helble.

A chemical engineer and professor of engineering, Helble was named provost in May. He succeeds David Kotz, the Champion International Professor in the Department of Computer Science, who has served as interim provost for about a year.

Helble has brought national prominence to Thayer, which President Philip J. Hanlon ’77 noted has flourished under Helble’s leadership. “He is a visionary and skilled leader who will bring a track record of accomplishment to his new role,” President Hanlon said in May, announcing Helble’s appointment.

Amid a pile of empty boxes—“I don’t know how all of this is going to get packed and moved in the next few weeks”—Helble spoke with Dartmouth News in his Thayer office. The conversation, an edited version of which follows, covered his leadership at the engineering school, his family, his running, Dartmouth’s students, and the value of a liberal arts education.

He also answered the following question, which he’s been asked more than a few times since it was announced that he’d be Dartmouth’s next provost.

What is a provost?

I’ve received emails from former students saying, ‘How exciting it is that you’re going to be Dartmouth’s next provost, but if you don’t mind my asking, what exactly is a provost?’ I’ve explained that the provost is the chief academic officer, in many ways the chief enabler for the campus and the person who has primary responsibility for making sure we are hiring and supporting and retaining a talented faculty to educate an incredibly bright, engaged, and diverse group of students.

Being provost means making sure our resources are aligned with our academic priorities. It means removing barriers to collaborations so faculty and staff from across the campus can work together to build new programs and educate students or conduct research without regard to disciplinary boundaries. It means making sure the support we receive from alumni, through philanthropy, in support of the academic mission, is, in fact, being used to support the most important elements of the academic mission.

How would you like the beginning of your tenure to unfold?

I think over the course of the first several months I’m going to be doing a lot of listening. I’ll meet with as many people from as many different parts of the campus as I possibly can to understand their goals, their hopes, and their aspirations for their particular area. And to get their thoughts and creative ideas about what the administration can be doing to make Dartmouth an even more vibrant and creative and incredible place.

I’ve started asking some of the people I work with to help me think about opportunities for Dartmouth to be first or best-in-class. What can we do with an investment of resources to move us to the head of the group?

How has a liberal arts education influenced the students you’ve worked with?

Engineers who graduate from Dartmouth receive an education that is really distinctive, not just in this country but globally. Virtually every school of engineering speaks about the importance of educating well-rounded engineers and engineering thinkers. But almost every institution does it by saying, “In four years we need you to focus almost exclusively on math, science, and engineering content.” Dartmouth says that’s completely the wrong way to think about engineering education. Dartmouth says a full, deep, complete education in the liberal arts is essential to producing thoughtful engineering leaders.

Thayer remains the only major research institution, to my knowledge, in this country, that says to all its students that a firm grounding in the liberal arts is so important that you have to earn a bachelor of arts degree on the road to earning your professionally accredited engineering degree. So it’s not one or two distributive courses that you take to complete a checklist—it’s a complete liberal arts education. If all you study is technology, then all you know is technology. You don’t really understand what technology can do to improve the human condition. Dartmouth provides that in a way no other institution does.

You’ve been a proponent of the value of a liberal arts education for some time. You minored in Spanish when you got your PhD. Why?

MIT required PhD students to earn a minor. And I thought, great, this is a chance for me to take courses in liberal arts that I wasn’t able to fit into my undergraduate engineering education. I learned that my adviser had other things in mind. His view of a minor and the view of most of the faculty was that you should be minoring in another branch of engineering or material science or math or fundamental science. But I persisted, and to his great credit he allowed me to pursue a minor in Spanish—with the understanding that I would still take all the classes in math and material science that he wanted me to take as well.

You’ve been around students here for 13 years. How would you describe them?

I’ve interacted with students who were not just engineering students but many, many students who are here at Dartmouth to study something else and will take an engineering course or two along the path to their degree. What I find over and over and over again is that they are incredibly hard working and intellectually curious. That’s one of the things that I find most inspiring about being at Dartmouth. To be surrounded by young people who are idealistic, open minded, motivated to go out and try to change the world and really want to draw from every aspect of this broad and rich institution. We’re really privileged to work with them and I am reminded of that every day I come to campus.

One of those recent engineering students is one of your daughters.

Having had the opportunity to recognize her at Thayer’s investiture and at Dartmouth’s commencement and to congratulate her on the stage was one of the highlights of my life.

There are a lot of scientists in your family. But we hear that there is one holdout.

I live in a house of scientists and engineers, with the exception of my youngest, my son, who’s made it absolutely clear that he’s going to be a humanities or social sciences major, and not follow in the footsteps of his parents and his two older sisters.

My wife is a bioengineer, a protein engineer. I’m more a classically trained environmental chemical engineer. But we have a very similar way of viewing the world. We tend to be quantitative, we tend to be data driven, we tend to be interested in asking questions and understanding what the fundamental issue is and then thinking about, if it’s a problem, how to go about solving it.

Our oldest child, a daughter, is a fifth-year immunology PhD student down at Harvard. My middle child, also a daughter, is the Thayer graduate. She has a BE in bioengineering and is working for a local biotech company started by a Thayer faculty member and is applying to PhD programs in engineering or science. My son is a sophomore at Bowdoin College. We’re all waiting to learn what he’s going to major in.

Life must have been especially busy when your children were young. How have you managed to find time to run?

When we had our children, we were focused on other things and I ran just a few days a week to stay in shape for many, many years. About five or six years ago, I decided to see if I could get myself in shape to run a half-marathon. Training for that got me hooked again. So I’ve been at it pretty steadily and now will be running my first marathon (the New York City Marathon) in 30-something years next month.

As you leave the west end of campus for an office in Parkhurst, what are you most proud of having accomplished at Thayer?

First and foremost, I’m proud of the fact that this community has managed to accommodate increasing demand from students and incredible growth without losing the sense of community that defines the Thayer School. I’m incredibly proud of the fact that Thayer became the first major research institution in this country to award more engineering degrees to women than to men. That’s something the engineering educational community has been pushing toward for decades and made incredibly small progress towards achieving. Yet, here we were able to do it in 2016.

I’m proud of the fact that this community has embraced entrepreneurship not just as a core value but recognizes that this is, in fact, what society rightly expects from engineering academic institutions—that we won’t just study technology but that we will create and invent technologies that have the possibility to go out and change the world. Our faculty do that by thinking about, very intentionally, putting the products of their research and their scholarship to use. Over 40 percent of our tenure-track faculty have started companies based on their work. I’m convinced that that is, without question, the highest level in the country.

A great example is the partnership between athletics and engineering around the development of the mobile virtual player, the MVP robotic tackling dummy. I’ve taken great pleasure the past couple of years in speaking to my fellow engineering deans from around the country and asking them, “How many of you can say that your students and faculty and staff have developed a technology that’s actually changing the way the game, any particular game, is played?” I promise you that no other engineering dean has had a student project debut on late night television with Stephen Colbert. Of that I am absolutely certain. 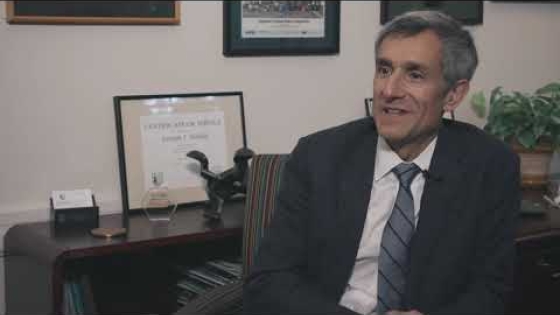