The programs will encourage reflection on the College’s place in a changing world. 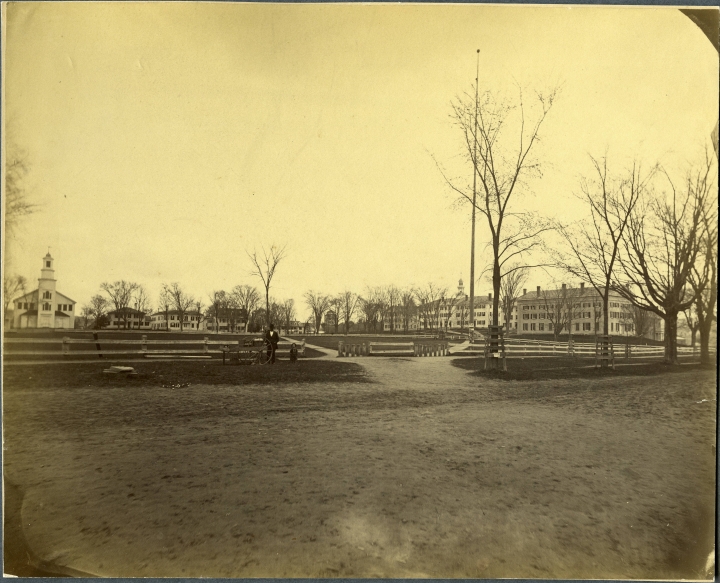 Dartmouth will live up to the name of its 250th birthday celebration, “Honoring Our Past, Inspiring our Future,” by offering a wide range of classes and conferences designed to spur yearlong reflection about the College’s evolving place in a changing world.

“Eight courses with that aim have been approved, and the list may grow,” says Donald Pease, the Ted and Helen Geisel Third Century Professor in the Humanities, who co-chairs the commemoration with Cheryl Bascomb ’82, vice president for alumni relations.

With Professor of History Robert Bonner and J. Russell Muirhead, the Robert Clements Professor of Democracy and Politics, Pease will teach a course about the landmark U.S. Supreme Court case, Dartmouth College v. Woodward, which held that the College would remain a private institution and not become a state university.

Pease will also offer an American drama course about links between Dartmouth and the theater, including, among other College-affiliated people, Jason Robards (father of Shannon Robards Davidson ’93). “Eugene O’Neill’s widow, Carlotta Monterey O’Neill, considered Robards the quintessential interpreter of two of O’Neill’s most compelling characters, the self-destructive older brother Jamie Tyrone of Long Day’s Journey into Night and Hickey, the willful despoiler of pipe dreams in The Iceman Cometh,” says Pease.

Pease’s drama course will also spotlight Jerry Zaks ’68, whose Broadway directing credits include John Guare’s Six Degrees of Separation. “Characters speak in the play about their Dartmouth connections,” says Pease. In a similar vein, James Dobson, a lecturer in English and in the Master of Arts in Liberal Studies program, will teach a course about fictional versions of Dartmouth that appear in novels, short stories, and poetry.

In her class, Susan Ackerman, the Preston H. Kelsey Professor of Religion, will ask “Is Dartmouth a Religion?” Joshua Compton, an associate professor in the Institute for Writing and Rhetoric, will consider the long influential career of James Winans, who taught speech at Dartmouth from 1920-42 and wrote widely used texts in public speaking. Another alumnus, George Ticknor, Class of 1807, will be honored in a course centering on his important work in Spanish literature, taught by José Manuel del Pino, the Dartmouth Professor of Spanish.

Pease says the 250 commemoration “involves critical thinking as well as celebration.” For example, Associate Professor of Sociology Deborah King’s course, “Lest We Forget, Collective Memory and Slavery,” will look at Dartmouth’s pre-Civil War history. For Randall Balmer, the John Phillips Professor in Religion, the focus will be on 1969—a turbulent time in American history and on college campuses, when Dartmouth students occupied the administration building to protest the presence of ROTC on campus during the Vietnam War.

Looking Back—50 Years at a Time

Fourteen academic symposia will cover signature events in Dartmouth’s history.  “We’ll start with our founding year, 1769, looking at the College’s place in the global economy of that period,” says Pease.

Other conferences will celebrate trailblazing Dartmouth women and the scientific legacy of astronomer Charles Young (Class of 1853). The series will conclude with a roundtable on Dartmouth’s future as a liberal arts institution, with deans serving as panelists.

“All year long we’ll be inviting back to campus our strongest graduates from over the years, showing Dartmouth’s effect on the world in research and education,” Pease says. “We’ll be celebrating multiple dimensions of our past, and envisioning different avenues leading us into the future.”

To learn more about events planned for the sestercentennial, visit the Celebrate Our 250th website.