What Is ‘Linguistic Disobedience’?

Yuliya Komska, an associate professor of German studies, poses and answers the question in her new book. 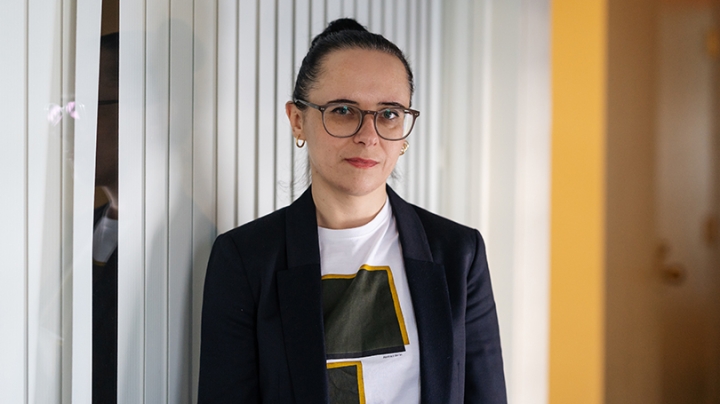 Yuliya Komska, an associate professor of German studies, has been thinking and writing a lot lately about the way language can be used either to threaten or protect democracy. In Linguistic Disobedience: Restoring Power to Civic Language, a new book she has co-authored with professors Michelle Moyd and David Gramling, Komska places recent political events in an historical context, calling for a renewed “linguistic disobedience” rooted in the “care for language as a complex and common good.”

Komska recently spoke with Dartmouth News about her hopes that everyday speakers and writers will stand up for language and languages as instruments of civic society in America and around the globe.

This is not a book about Germany, or the German language—your primary research areas. What spurred you to write it?

Actually, it does directly relate to my interest in postwar and Cold War Germany. After Nazism, divided Germany grappled with different types of ruin, and one type of ruin was linguistic. Language had been corrupted by the Nazi regime, and that verbal rubble had to be cleared, in a sense, or confronted.  If you teach German studies, as I do, you notice how “sticky” authoritarian language is, how it’s hard to get rid of—some coinages abide to this day. Besides, I grew up in the USSR, the part that is now Ukraine, in a family of a dissidents. So I have always been aware that there is an “official” language used by the state, the language of cooptation.

The professional and the personal complicate each other, for me. After President Trump was elected, his language got a lot of attention. But I kept thinking about a counter language—the language citizens can reclaim. Friend and historian of colonialism Michelle Moyd and I wrote an op-ed piece in the Guardian, “Donald Trump is changing our language. We need a vocabulary of resistance,” and the book grew from that.

But as I read it, your book is not really about President Trump—it seems much broader and deep than that.

Oh yes, I could have written this long before he was elected. But in ordinary times, language, as we observe in the book, is a matter of consistent neglect. Despite the popular refrain that “it matters,” people need a crisis to pay attention to it. The present moment strikes many as a crisis, so there is an audience.

The idea of “linguistic disobedience” is complicated. In your book, you suggest that in the not-so-distant past, powerful leaders used to set the rules for language, dictating how citizens used it, and that dissidents could resist authoritarianism by rejecting those linguistic norms.  But these days, have the tables turned?

We point out that in the 20th century (and before it), there were strict rules, norms, grammars. The powers that be—or were—imposed them from the top down. So, if you wanted to disobey, or resist authority, you had to learn what the rules were and push against them by bucking the norms, devising languages of your own, using different rhetorical tools—like irony, for example.

Now, however, it’s the powerful who have become “disobedient,” using, as we write in the book, “a reliably effective set of linguistic tools to ‘win the hand’ in face-to-face, real-time, naturally occurring talk, or its simulations” on social media. President Trump is an example, disregarding conventions of capitalization and spelling, using profanity, resorting to oral, “post-literate” speech in writing. What do obeying and disobeying mean anymore? That’s no longer clear-cut.

So why, in your view, is it difficult now? To take back civil discourse, as it were?

Because it’s not always clear who holds power over language anymore. Government? Corporations like Google, Apple, or Disney—agents in the realms of proprietary language trademarking, code-writing, translation, speech recognition? Other institutions, including universities that often sign on to promulgate corporate speech? We are inundated with verbal matter and bombarded with language that is being corrupted by—we don’t always know or find out by whom or what.

But—and this is another purpose of our book—we cannot think that all language is bad or corrupted. We also have to think of language as a source of hope, as well, and take care of it—and care for it. Otherwise we just stop responding, give up on it, and that’s what I think is happening. Most people don’t feel they have a stake in making language their own anymore.

So how do you model and encourage healthy language-making in your life and in your own classrooms? How do you get others to care about and for all the languages they learn to speak?

I think it’s about sorting out your own language, figuring out where it comes from. I want students to comment not just on the content of what they read, but the kind of language it’s written in. There’s new demand now for this very old literary-critical exercise. I’m determined to read the texts with them with an eye to language in a way that explains the relevance of that to their everyday lives, because that’s a source of critique, but also of inspiration and hope—the hope I was taking about earlier.

And I am now very interested in freeing up students to write the way they want to write. I have shifted gears to let them experiment with the language they like—working with academic papers, yes, of course, but also personal essays, opinion pieces, so they can cultivate their own voices. We all need to realize that even within each language, there are many languages. English, for example, includes the language of corporate  America, or the language of protest, or the language of lyric poetry, and it’s not a question of replacing one language with another, but of navigating all of them, and realizing that in a democracy, we should be as free to use them as to refuse them.