At Dartmouth, Exploring Quantum Computing With the Experts

Students, faculty, and visitors from IBM discuss the burgeoning field at workshop. 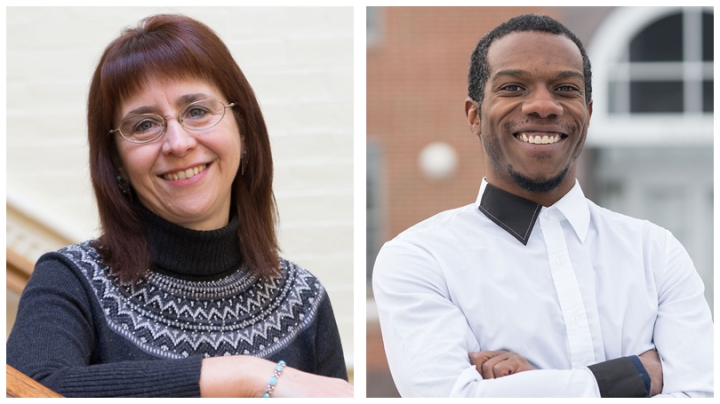 Faculty, students, and IBM representatives recently gathered on campus to share information about quantum computing and peer into the future of the developing field, in which Dartmouth is considered a serious player.

Dozens of faculty and students—some new to the field and some seasoned veterans—attended the winter-term workshop, which included lectures and demonstrations of quantum computing throughout the day, followed by an evening of “Programming N’ Pizza” that enabled the students to test-drive IBM’s Qiskit, an open-source software development kit for quantum computing. Researchers from IBM Quantum were on hand to help participants get a sense of how to use Qiskit via the Python programming language to control prototype IBM quantum hardware.

James Whitfield, an assistant professor of physics, had invited the IBM representatives. “My group and IBM have a healthy working relationship,” he says. “I saw the visit as an opportunity for IBM to promote its ongoing quantum computing research while also allowing Dartmouth, as a whole, to recognize our own success in the area of quantum information science.

Visiting IBM quantum researcher Antonio Mezzacapo said, “There are a lot of cutting-edge research groups here, and we always keep an eye on whatever is happening in academia. And it goes both ways. We learn from each other.”

These days, millions of dollars are being invested in the promise of quantum computing by IBM, Google, Samsung, and Microsoft, as well as the U.S. and the governments of China, France, and the U.K. The evolution of quantum information science (QIS) has its roots in the early 20th-century quantum mechanics—the complex theoretical framework developed to explain the bizarre behavior of subatomic particles—formulated by Nobel laureate physicists Max Planck, Niels Bohr, Albert Einstein, and others.

Their work opened a window into a universe where particles can exist in different states simultaneously, where they can have a value of one or zero, or both at the same time, in the phenomenon known as superposition. Particles could exhibit strange interconnections known as entanglement, which Einstein described as “spooky action at a distance.”

As this new subatomic reality is being translated into the realm of computing, users move from the binary bits of ones and zeros of classical computing to quantum bits (qubits). With all their mysterious qualities, qubits can potentially handle exponentially larger amounts of data in hugely powerful new computers.

Much of the future of quantum computing lies in the challenges of big data—where its power can help in finding the proverbial needle in the haystack—in areas such as cryptography, the analysis of financial data, and the discovery of new medicines and materials. It is in this last area that Whitfield and his group have contributed heavily, using quantum computers for simulating matter. This is seen as a key growth area for the field and has helped Whitfield place graduate students in internships at IBM Quantum, among other places.

“There are fundamentally different principles that quantum mechanics brings. There are types of quantum correlations that exist but have no classical physics analog. Try as you may, they only exist in the quantum world,” says Professor of Physics Lorenza Viola, whose main area of expertise is to model and control unwanted noise effects in quantum computers.

Viola has led Dartmouth’s charge into QIS since her arrival as an associate professor in 2004. The following year, she premiered a new graduate-level course in quantum information theory and has been a guiding force in QIS at Dartmouth ever since. A recognized leader in the field, Viola served six years as a member of the executive committee for the Topical Group on Quantum Information of the American Physical Society (now the Division on Quantum Information), chairing it in 2008. In 2014, she was elected a fellow of the American Physical Society. Her participation in numerous international conferences and symposia has helped establish Dartmouth on the quantum information landscape.

Inspired by what he heard in Washington, Whitfield says, “Now it is a nice time for us to ramp up, train more students, graduate them.”

The IBM visit provided even further encouragement when one of their presentations concluded with a banner that read, “We are hiring!”

“This highlights the fact that Dartmouth’s role as a training ground is a nice place for them to recruit,” Whitfield says. “We want to graduate good students and put them in good places. What better place is there to put them than somewhere like IBM, and what better graduates are there than those from Dartmouth?”