The experimental physicist will discuss high-altitude balloons and small satellites. 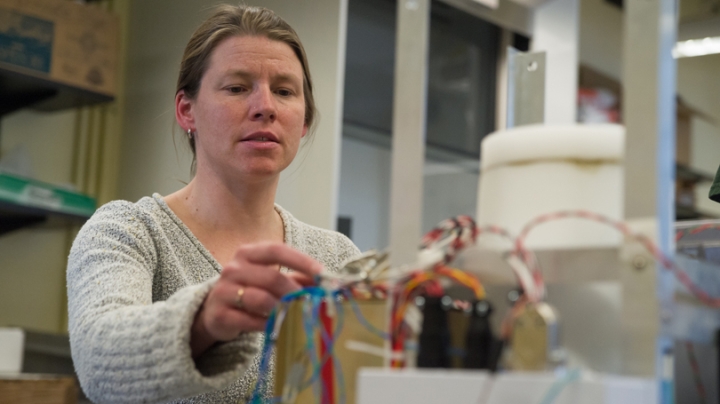 Professor Robyn Millan prepares a science payload for a launch into the stratosphere. (Photo by Eli Burakian ’00)
2/04/2019
Body

Robyn Millan, the Margaret Anne and Edward Leede ’49 Distinguished Professor of Physics and Astronomy, will deliver the 31st Presidential Faculty Lecture on Tuesday, Feb. 12, at 4:30 p.m. in Filene Auditorium at Moore Hall.

Millan is an experimental physicist specializing in the processes acting on high-energy particles, such as those in the Van Allen radiation belts that surround the Earth. She studies these particles and their behavior in both the atmosphere and in space and is developing new experimental methods for her studies.

At the invitation of the National Academy of Sciences, Millan recently spoke to a group of about 50 scientists and engineers in Washington, D.C., where she talked about the legacy and the future of small satellites, a subject she will discuss as part of her lecture.

“There has been a lot of interest in the space research community because the hope is that by building these small things we can start to do different kinds of science. Launching an array of small satellites can permit multiple measurements in real time, like a series of buoys in the ocean or weather stations on Earth,” says Millan.

Millan says she will also discuss “using old methods in new ways,” focusing on her balloon experiments. Launched from Antarctica to altitudes up to 125,000 feet, the balloons carried instruments that measured high-energy electrons entering the atmosphere at velocities approaching the speed of light.

The Presidential Faculty Lecture Series was established in 1987 by then-President James O. Freedman and honors the contributions of outstanding members of the Dartmouth faculty. Sponsored by the Office of the President, Millan’s lecture is free and open to the public and will be followed by a reception.