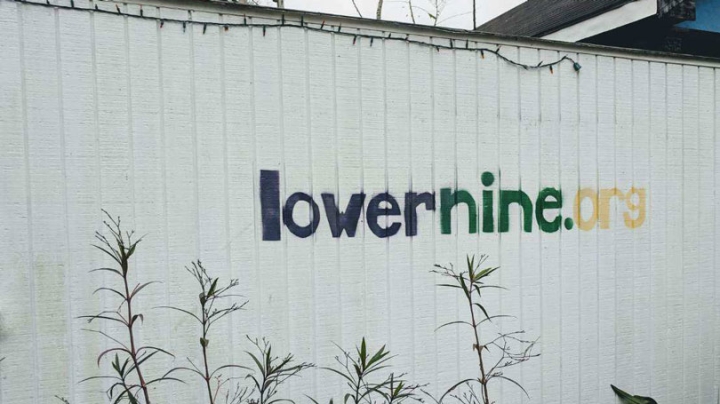 Lowernine is a nonprofit organization in New Orleans where Dartmouth students will volunteer during spring break. (Photo by Cristina Carpenter)
3/12/2019
Body

As spring break approaches, 10 Dartmouth students are packing their bags for New Orleans. Another 10 are heading to Puerto Rico. But they won’t spend the week lounging on beaches. They’ll wield hammers and saws, helping residents recover from the hurricanes whose effects are still being felt years after the storms hit.

In a joint project launched this year by the Dartmouth Center for Social Impact (DCSI) and the Office of Residential Life, two house communities will partner with grassroots agencies serving neighborhoods where disaster recovery has been slow. For their alternative spring break, “Place, Story, and Inequality in New Orleans,” Allen House students will travel to New Orleans’ Lower Ninth Ward. Their mission: to help a nonprofit organization, Lowernine, fix homes that had been improperly repaired after Hurricane Katrina struck in 2005. Trip leaders are House Professor Janice McCabe, associate professor of sociology; Allen House Assistant Director Lauren Oliver; and Cristina Carpenter, DCSI’s program coordinator for educational access and equity.

The house community partnerships combine mandatory academic preparation with off-campus volunteer work. At weekly seminars led by Dartmouth faculty, the travelers have been learning about the geographical, political, and socio-economic conditions that are making recovery from the hurricanes protracted and difficult.

“The goal is ‘fair trade learning,’” says Rosario Kelly. “The idea is to collaborate with community partners in a way that is advantageous for all the community members, making sure that the work students do is economically and socially viable and responsive to the genuine, expressed needs of the community—not just what feels good or is fun to do.”

At East Wheelock: Brushing Up on Puerto Rican History 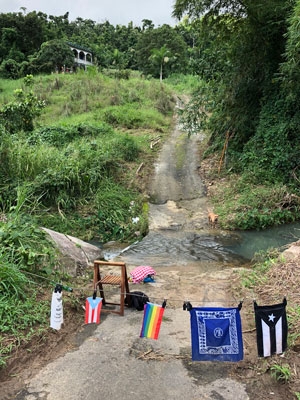 A farm in Puerto Rico, El Departamento de la Comida, is the worksite of an alternative spring break for students from East Wheelock House. (Photo courtesy of Center for Social Impact)

Sharing pizza with students in an East Wheelock seminar room, Israel Reyes, an associate professor of Spanish and Portuguese whose parents emigrated to the U.S. from Puerto Rico, traces the historically complex relationship between the territory and the U.S. government. In the wake of Hurricane Maria, Reyes says, there are conflicting visions about how to rebuild the infrastructure and economy.

“You have one vision that is all about privatization, investment, the tax incentives that can bring about new investments in the tourist industry and the service industry. You also have grassroots, community-based efforts that are looking at sustainability and autonomy and self-reliance,” Reyes says. These different visions of Puerto Rico are at times in conflict, he says, “because they are trying to scramble for limited resources, and the corporate interests that are involved are looking for exclusive rights to energy production, for example. So what will that mean for people who are trying to be independent?”

Maria Kuhn ’21 is eager to help and to learn from Puerto Ricans struggling to put their lives back together.

“My family is Hispanic, and I would love to more deeply engage in that community,” she says. “Also, I am planning to be a government major and there are interesting relations between mainland U.S. and Puerto Rico and how they affected the American public policy reaction to the hurricane,” says Kuhn.

At Allen House: Storytelling Through Maps

“It’s not just that people were ignored after the disaster, but that certain groups of people in certain parts of the city were exposed to an uneven geography of risk,” Nelson says.

Themistoklis Haris ’21 sees similarities between the topography of New Orleans—where he has never been—and his hometown in northern Greece. “It has a crescent moon shape and it’s close to a beach,” he says. “In Greece we really don’t have issues of racial segregation because of geography, but income segregation does exist. So I am fascinated and excited to learn about how social dynamics happen in places like New Orleans.”

“I have taught about Hurricane Katrina in my sociology classes,” says McCabe. “Some people argue that it wasn’t a natural disaster at all, but more of a social disaster, because it really brought to the forefront inequalities that were already present in that city and in our country.”

McCabe says she’s looking forward to rolling up her sleeves along with students to help restore the vitality of a neighborhood where many African Americans owned their own homes, but were forced by Katrina to evacuate and have been unable to return.

“It’s amazing how this project has brought Allen House together,” she says. “Sharing an interest in making the world a better place and wanting to be reflective about our own stories and our own place in the world has given us common ground.”

Several other Dartmouth programs invite student participation in alternative spring breaks. For example, the William Jewett Tucker Center’s annual Washington, D.C. trip focuses on the intersection of race, faith, and justice. The Office of Pluralism and Leadership, with the Afro-American Society, will host a week in Miami centered on the cultural history of the Black/Afro-Caribbean diaspora. And there’s a Student Wellness Center trip to the Kripalu Center for Yoga and Health in Stockbridge, Mass.