The film historian helps archives save rare films and develop tools to analyze them. 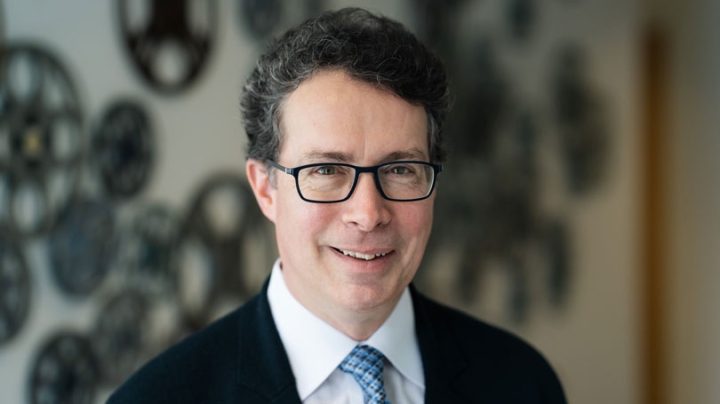 Associate Professor Mark Williams is building on emerging technologies to create new ways for researchers to share their scholarship with archives and each other. (Photo by Eli Burakian ’00)
3/14/2019
Body

Mark Williams has a mission. The film historian and associate professor of film and media studies wants archives of moving images—from films dating back to the 1890s to television news footage from the 1960s—to be digitally accessible to scholars as never before.

He’s building on emerging technologies to create new ways for researchers to share their scholarship with archives and each other—what he calls a “virtuous cycle in relationship to visual culture and history.”

The center of this activity is Williams’ Media Ecology Project (MEP), which is working to develop tools that are transforming moving-image research. Along the way, MEP has been developing partnerships with dozens of institutions, archives, and researchers around the country and the world and across the traditional boundaries of academic disciplines.

Most recently, in December 2018, MEP received two grants totaling more than half a million dollars from the National Endowment for the Humanities.

Williams and MEP Associate Director John Bell, lead applications developer in Dartmouth’s Information, Technology, and Consulting services, are building a digital compendium for scholars of rare and influential films archived in the Paper Print collection at the Library of Congress, as well as early films from the American Mutoscope and Biograph Company preserved at the Library of Congress, The Museum of Modern Art, The British Film Institute,and Amsterdam’s EYE Filmmuseum.

“The Paper Print collection at Library of Congress is a one-of-a-kind collection of early cinema that exists because of ways that early filmmakers responded to copyright law,” Williams says. To register for copyright for the highly flammable, notoriously fragile nitrate films of the late 19th and early 20th centuries, early filmmakers struck positive prints of their films on ribbons of photographic paper and put those on deposit at the Library of Congress. Today, many films that would have otherwise been destroyed still exist because of these paper prints.

“If you look at nitrate film stock for any length of time, it will spontaneously combust, and you can’t put the fire out,” he says. “Paper decays, but it’s nothing like nitrate. So thankfully the Library of Congress discovered these and recognized the value of them, and they’re in the process of digitizing them.”

Few scholars in the world have had the opportunity to see most of the paper print films before. He hopes MEP’s tools will provide scholars the ability to access these films and share their annotations with fellow scholars as well as machine learning systems—analysis that has the potential to change his field.

“Most questions you might ask about the development of cinema as an art form can be asked of the paper prints,” he says. “How much was shot? How much was shot outdoors? What were performance styles like? During the paper print era, 19th-century theatrical performance styles are being renegotiated for the camera. Paper prints capture that negotiation. This is just throwing open the door in terms of thinking about what early cinema is about. It’s just so exciting.

MEP’s partner, the University of Maine-based VEMI lab, will use this collection as a semantically rich and complex test-sample to develop new ways of cataloging and annotating the footage to make it accessible to people who are blind or have other visual impairments.

“This project gives us the capacity to seek out and help to discover what I think of as fugitive history,” Williams says. “In many cases these are materials that haven’t even been in a position to be forgotten—they weren’t even remembered the first time. But in surprising quantities, thank heavens, they’re sitting on somebody’s shelf.”

Williams says these projects, among others, are positioning MEP for even greater things. Both grants offer multiple opportunities for student researchers to participate, especially via funding from the Undergraduate Research office.

“We are interested in using this new level of attention and funding to think about the next level,” he says. “I think the next step is considering strategic ways to move outside of the United States. I’m very excited about the possibilities with film archives in China and Southeast Asia. If we can add value to archives—to an individual archive, but also across archives—that’s exactly where we want to go.”