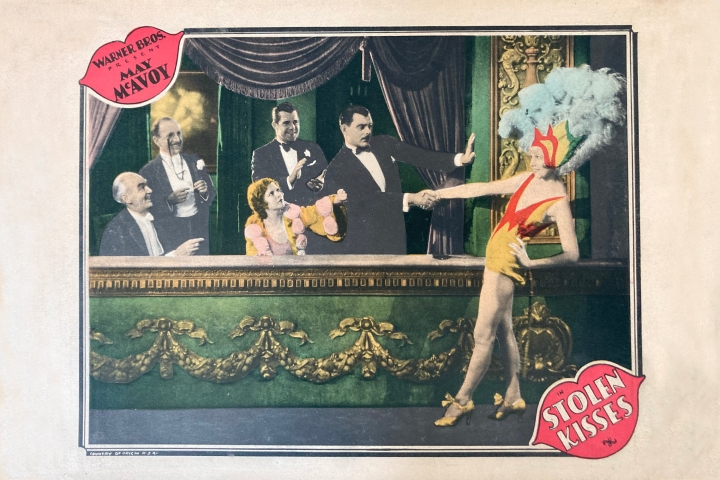 The lobby card for the 1929 film Stolen Kisses is part of the collection to be digitized in the Media Ecology Project’s Early Cinema Compendium. (Courtesy of Dwight Cleveland)
8/29/2022
More Reading

Dartmouth and its Media Ecology Project have signed an agreement with a prominent film poster and lobby card collector to digitize his significant collection of material related to film history.

Under the agreement, Dwight Cleveland—a Chicago-based collector and real estate developer with an interest in historic preservation—will provide access to his collection of more than 10,000 rare and valuable lobby cards from the silent film era to MEP Director Mark Williams.

Williams, an associate professor of film and media studies, will digitize the collection for the MEP’s Early Cinema Compendium, which will be published online as part of a grant from the National Endowment for the Humanities.

Lobby cards, often 11 x 14 inches, were distributed by film studios and marketers and contained images from the film to give a sense of the plot and entice viewers to buy a ticket, according to the Library of Congress. They were often placed on an easel or hung on a frame near a movie theater’s box office.

Part of what is exciting about this project is that we can make available, both to the public and also to scholars, extremely rare material about the earliest days of cinema.

Cleveland has also arranged for 3,500 additional lobby cards to be loaned to Dartmouth from the National Cowboy and Western Heritage Museum in Oklahoma City for the project.

“We are very grateful to Dwight Cleveland for his generosity,” says Williams. “Part of what is exciting about this project is that we can make available, both to the public and also to scholars, extremely rare material about the earliest days of cinema. Many films from that era are gravely endangered, and the vast majority are considered to be materially lost.”

Many of the cards are more than 100 years old, such as for the 1917 silent film production of A Tale of Two Cities. The card for the 1929 “part-talkie” Stolen Kisses, starring May McAvoy, promoted a film that no longer exists for viewing.

“This is going to bring together thousands of examples of rare early cinema visual culture,” Williams says. 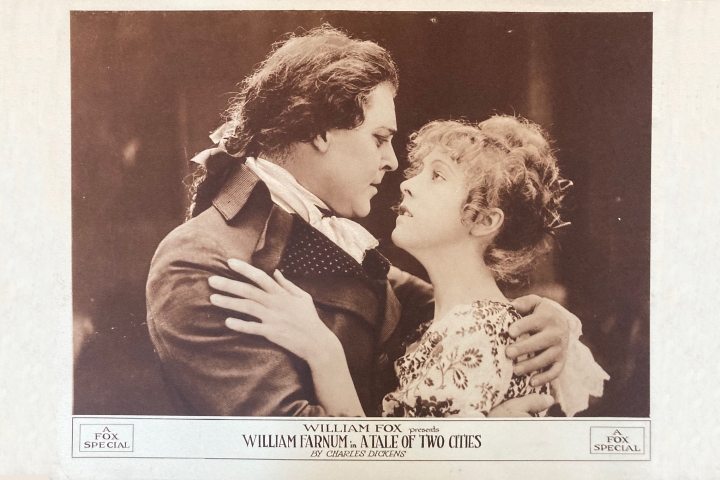 A lobby card from the 1917 silent film production of A Tale of Two Cities. (Courtesy of Dwight Cleveland)

Williams, who will be teaching a “Silent to Sound” film history course this fall, describes MEP as a sustainability project that develops literacies of moving image and visual culture history and functions as a collaborative incubator, fostering new research questions and methods. Those range from traditional arts and humanities close-textual analysis to distant reading, which relies on computational methods to help analyze graphics and visual culture components as data.

The Early Cinema Compendium will feature 15 collections of rare and valuable archival and scholarly resources plus 10 essays that introduce new directions for early cinema research.

In addition to Cleveland’s lobby card collection, the compendium will include more than 7,000 frame samples from early and mostly lost U.S. films plus access to over 2,500 archival films across the genres of early cinema. Courtesy of archival partners the Library of Congress and the National Archives and Records Administration, it includes digitizations of the library’s Paper Print film collection and American Memory Project, and NARA’s CBS World War I archive and U.S. Signal Corps collection.

Williams says there is an urgent need to digitize the historical lobby cards given their rarity, and the compendium will be a perfect context to view them within an essential online resource for early cinema scholarship around the world.

Cleveland says he was impressed by the MEP and its support from the NEH.

“Mark Williams is at the cutting edge of digital research and the metaverse in historical film studies,” says Cleveland. “Mark’s project seamlessly transforms my preservationist character into futuristic mode.”

The project’s scanning workstation will be located in the Jones Media Center at the Dartmouth Library, with support from Associate Librarian for Digital Strategies Daniel Chamberlain.

The process of digitizing copies of each lobby card, which will be possible with the help of a new museum-quality digital copier, requires extreme care and diligence due to the fragility of the materials. After creating and verifying digital copies of each lobby card, a student research group assembled by Williams will create and continue to maintain high-quality metadata for these thousands of rare artifacts.

In recognition of Cleveland’s generosity in sponsoring the project, he has been named to the newly created post of associate visual cultural curator of the Media Ecology Project at Dartmouth College.

The project is separate from a $50,000 NEH grant MEP was just awarded to plan workshops and a symposium on films produced by the U.S. Information Agency.