Virtual Reality ‘Sees’ Through the Eyes of a Tiny Primate 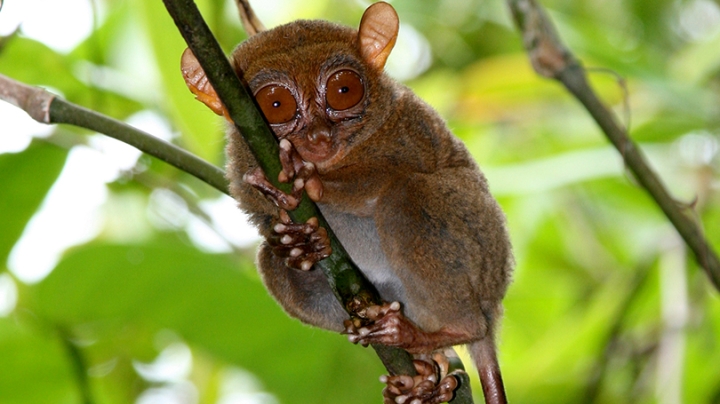 With their enormous eyes, which give them exceptional visual sensitivity, Southeast Asia’s tarsiers are a perfect case study for Professor Nathaniel Dominy. As an anthropologist who studies the evolution of primate sensory systems, he and Samuel Gochman ’18 use virtual reality to lead a cadre of students and collaborators in exploring how other organisms sense their environments.

“Most ninth- and 10th-grade students learn about optics and natural selection, but the two topics are usually treated in isolation,” says Dominy, the Charles Hansen Professor of Anthropology. “The tarsier is an effective means of unifying both concepts. You have to understand optical principles to understand why natural selection would favor such enormous eyes in such a tiny predator.”

Working with the DALI Lab, Dominy and Gochman developed a VR simulation of tarsier vision and published “Tarsier Goggles: a virtual reality tool for experiencing the optics of a dark-adapted primate visual system,” in the journal Evolution: Education and Outreach.

Lead author Gochman had already co-authored a paper with Dominy as an undergraduate, though dealing with a different but equally obscure primate—the aye-aye—a Madagascar lemur that displays a proclivity for alcohol through its diet of fermented nectar.

“Over the years Sam became a biology major modified with anthropology and completed a human-centered design minor at Thayer,” says Dominy. “He wanted to do independent research that would combine all of his interests in biological anthropology and design, so he created this VR system based on the visual system of the tarsier, something he would have learned about in my courses.”

“I realized that most students’ learning of natural selection was limited to diagrams, slideshows, and models,” says Gochman. “Partnering with the DALI Lab, I used virtual reality to break this barrier of understanding and immerse users in what a primate with extreme visual traits might see.” 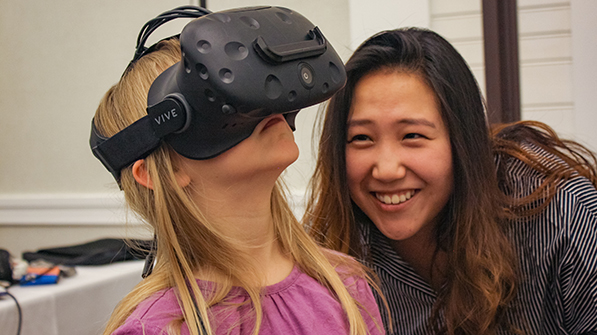 Dominy says moving in the direction of human interface and design elements was a natural extension of Gochman’s interests in primates and anthropology. “He spent most of his senior year working on this VR project, with an eye to publishing it in an open-access education journal and releasing the VR build as free open-source software.”

Gochman had asked how they could simulate the experience of the tarsiers’ optics and gain some understanding of the tangible effects of adaptation. The eventual answer: Tarsier Goggles.

“This is a tool for science education, personally engaging students in hands-on scientific concepts in physics, perceptual science, and biology,” says Gochman. “Virtual reality offers an immersive experience for understanding the visual effects of the tarsier’s adaptations.”

Gochman has demonstrated Tarsier Goggles at school technology exhibitions, a natural history museum, and at an anthropological society meeting. “Users of various age groups and science backgrounds experienced the system in different ways, revealing the versatility and subjective appreciation that can come with a newly opened connection to another worldview,” says Gochman.

Users experienced several virtual environments that allowed them to alternate between human and tarsier vision. One was modeled on the rainforests of Borneo at night, where users could move between trees in “a dark, maze-like space that is practically opaque under human visual conditions but navigable as a tarsier, demonstrating the advantages of tarsier visual sensitivity,” the authors write. “It also simulates the vertical clinging-and-leaping behavior of tarsiers.”

Lorie Loeb, faculty director of the DALI Lab, said of the experience, “We all think we are seeing what everyone else sees, but in fact we are all seeing something different. I feel connected to animals in a way I haven’t been before.”

Who Won the U.S.-China Trade War?

Description
An essay on the 2018-2020 trade war cites a paper co-authored by Tuck associate professor and globalization chair Davin Chor that used satellite imagery of lights in industrial areas of China to show the impact of tariffs. Economics professor Douglas Irwin is also quoted.
Logo
Image