Secretary Alex Azar ’88 met with students recently at the Nelson A. Rockefeller Center. 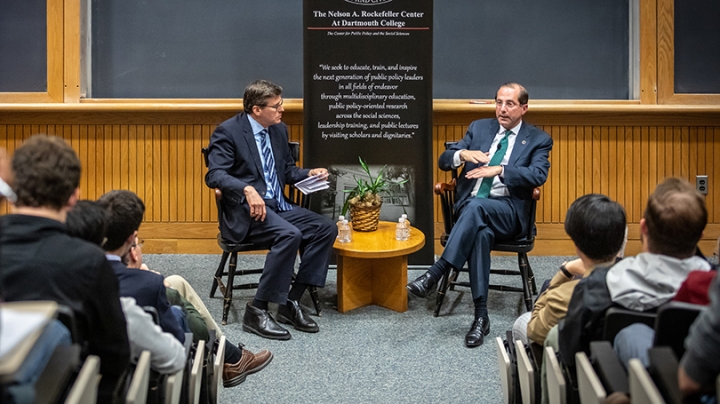 Health and Human Services Secretary Alex Azar ’88 talks about the medical insurance market during a conversation with Senior Lecturer Charles Wheelan ’88 and students at the Nelson A. Rockefeller Center. (Photo by Lars Blackmore)
5/07/2019
Body

“In 1988, did you ever think you would be a cabinet secretary, that Tina Rutnik (Kirsten Gillibrand ’88) would be running for president, and that I would be writing a lot of books with the word naked in the title?” (Wheelan is the author, most recently, of Naked Money: A Revealing Look at What It Is and Why It Matters.)

Azar looked around the auditorium of the Nelson A. Rockefeller Center for Public Policy—the event was attended by more than 100 students—and conceded that this was not what he was thinking when he was taking classes at the Rockefeller Center. In fact, he struggled with advanced econometrics during his sophomore summer in that very auditorium, he said.

But Azar, who clerked for Supreme Court Justice Antonin Scalia, worked with Ken Starr on the Clinton-Whitewater investigation, was one of the litigants for George W. Bush in the Bush v. Gore court case, served as general counsel to the secretary of Health and Human Services from 2005 to 2007, and was named HHS secretary by President Trump in 2018, said he caught the political bug at Dartmouth.

As students, Wheelan and Azar were energized by the presidential primary in 1988, which was an open race for Democrats and Republicans. Azar was chairman of the College Republicans and got involved in the primary campaign of Republican Pete du Pont. He was thrilled by the debate held on campus that year.

“The Dartmouth debate was it. You had to win that or you were out,” Azar said.

Wheelan asked Azar how working in the Trump administration differs from working in the Bush administration. The Bush White House was corporately structured, with policy making moving up the chain of command, and proposals presented to the president at the end of the process, Azar said.

“President Trump follows more of the FDR/LBJ approach. It’s very much a direct interaction.” He speaks to Trump every few days directly or by phone.

“President Hanlon was kind enough to have me over before this event. I was sitting in his office and my phone rang, and it was the president of the United States on the phone for about a 10-minute discussion. It’s very engaging. It’s very exciting,” Azar said.

What did the president want, Wheelan asked.

“Well, let me tell you this, he wanted drug prices down. He absolutely talked about drug prices on that call, as well as other things,” Azar said to laughter.

Wheelan had collected questions on notecards from students in the audience, and posed a number of them to Azar, including one asking the secretary to speak to the week’s news that HHS would allow medical providers to deny care based on their religious beliefs.

He said that the “religious and moral conscience” regulations were not created by his department, but by statutes enacted by Congress. “We haven’t made up new protections. It’s actually implementing rules that the prior administration, frankly, left dormant,” he said. “These are religious liberties that are very much a first freedom—Amendment No. 1—and we do believe we can respect both access for people as well as protect the rights of conscience of health care providers.”

Charles Schneider ’22, said being able to hear about the career path and philosophy of a policy leader and Dartmouth alumnus such as Azar was a great opportunity.

“I think the most important thing about a College education is being able to see all sides of arguments—political, social, moral,” Schneider said. “It was a good opportunity to advance an open education.”

Said Rockefeller Center Director Andrew Samwick, the Sandra L. and Arthur L. Irving ’72a P’10 Professor of Economics, “We were very fortunate to have Secretary Azar here so he could engage in a fairly intimate lecture environment with our students. These are some of the very nice perks that you get in coming to Dartmouth.”