At the 250th anniversary event, the liberal arts are held up as a guiding principle. 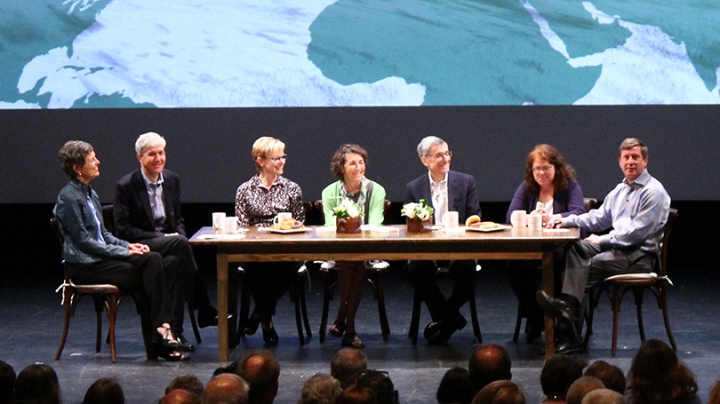 Dartmouth leaders looked into the future of higher education at a flagship 250th anniversary event Saturday and offered their vision of the liberal arts as the guiding principle that will ensure that Dartmouth thrives in the 21st century.

“In a world that’s getting more complex every day, where the rate of change is faster and faster and new industries are created not in decades but in a couple of years, we need to be ready for this,” Dartmouth Board of Trustees Chair Laurel Richie ’81 told a crowd of nearly 500, including many alumni in town for reunion week, at the event, “Disrupted or Disruptor: Dartmouth in a Changing World,” held in the Hopkins Center for the Arts’ Spaulding Auditorium.

She introduced moderator Barbara Will, the A. and R. Newbury Professor of English and associate dean for the faculty of arts and humanities, and the panelists: Provost Joseph Helble; Kathryn Kirkland, MED ’86, the Dorothy and John J. Byrne Distinguished Professor at Geisel School of Medicine; F. Jon Kull ’88, dean of the Guarini School of Graduate and Advanced Studies; Laura Ray, then-interim dean of Thayer School of Engineering; Matthew Slaughter, dean of the Tuck School of Business; and Elizabeth Smith, dean of the Faculty of Arts and Sciences. After the discussion, President Philip J. Hanlon ’77 joined the panelists for closing remarks.

As the event began, Will invited the panelists to join her at a table set with pastries and coffee at center stage. To the audience, she said, “I’ve invited six very accomplished leaders at Dartmouth to join me at the table to discuss and wrestle with some of these issues around change, and I hope you enjoy eavesdropping on our conversation.”

Dean Elizabeth Smith on the Meaning of Disruption

Will started the conversation by asking Smith, “Is disruption bad?”

Disruption itself is not good or bad. It is the goal of that disruption that is important, Smith said.

She said major changes at Dartmouth through the years, such as a recommitment to Native American education and President Hanlon’s Moving Dartmouth Forward initiative, are examples of disruptions that reflect Dartmouth’s core values.

“I can think of disruption on many different levels,” Smith said. “In some ways, the faculty are disrupters. These are people who are on the cutting edge of scholarship. And you hear in the news that they’ve got a new way of thinking about something, so they’re disrupting our old ways of thinking.”

“You don’t disrupt for the sake of disruption,” said Smith. “When you make a conscious decision to disrupt, it is because you are thinking about your core values—like when Dartmouth made the decision to go coed.”

Will then asked Kull what he considered, from his perspective as head of Guarini, some of the challenges facing higher education.

Kull said specialization had been on his mind. Specifically, he has noticed that the desire for specialization among graduate and undergraduate students is going in opposite directions.

Traditionally, graduate study was a deep investigation into a very specific topic, but now graduate students are looking for interdisciplinary opportunities and want to learn skills such as leadership, entrepreneurship, and team building that are embedded in a broad, liberal arts education, he said.

On the other hand, it seems that increasingly, prospective undergraduates and their parents are questioning of the value of the liberal arts education, he said. Students are coming in with specific career goals and want to specialize right away, which he sees as a troubling trend.

Helble agreed. “This is a fundamental tension in higher ed today,” he said, turning to the others at the table and asking how they reconcile these opposing ideas. 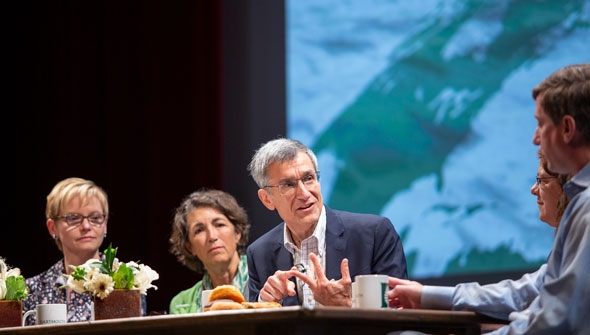 Provost Joseph Helble makes a point during the discussion at the Saturday morning event in Spaulding Auditorium. (Photo by Mark Washburn)

The College should open the world, not narrow it, Kirkland said. “To me, a Dartmouth education is there to say, ‘No, go across all the schools and come out as a full human being.’ ”

She spoke about teaching poetry to medical students as a way to help them understand the principle of “don’t just do something, stand there.” Her students hate having to confront the kinds of questions that arise in discussing the meaning of poetry, she confessed, drawing laughter from the crowd.

“Holding them in this uncomfortable space with a question for which there is no right and no wrong answer is valuable,” she said. “This is not an abstract concept. I sit with families who have to make decisions where there are no outcomes possible that they want. The ability to sit with discomfort to help families navigate through these things is a skill that comes from training in the liberal arts.”

Dean Matthew Slaughter on the Tensions of Globalization

Slaughter drew a parallel between the tension within higher education and current tensions in the world of international business. There is a growing political current that opposes globalization in favor of a more parochial economic view that sees employment and industry and innovation in a national context, he said.

“The trend is to build walls against globalization. For us at Tuck, and for all of us at Dartmouth, we tend not to build walls, we build bridges,” Slaughter said, citing the diverse and international student body at Tuck and the school’s embrace of international programs.

This diversity and international interplay enrich Dartmouth and they are elemental to the College’s commitment to the liberal arts, Slaughter said.

Helble said he had been thinking about the disruption brought on by the rapid development of technology. Advances like facial recognition software, the collection of massive amounts of personal data by companies like Amazon and Google—and the fact that children today will be tracked and targeted by algorithms from birth—trouble him.

We have to think about how we are instilling ethical values in students, and the critical thinking that enables them to ask, not if something can be done, but should it be done, Helble said.

“For us, this is a moment of responsibility in teaching our students, from the beginning, that these are thoughtful and deliberate choices they’re making. That has to be part of the rubric of their education,” Helble said.

With the fourth of her four children heading off to college, Ray said she’d been thinking about access and affordability of higher education. “It’s not just about getting students through the door, it’s about getting them to the door,” said Ray, whose appointment as interim dean of Thayer ended Monday, when the term of recently named Thayer Dean Alexis Abramson began.

The College needs to think about how it can ensure that it attracts a diverse student population, because diverse perspectives enrich the education Dartmouth is able to offer and empower a new generation of leaders from a broader segment of the population, she said.

An example of this philosophy in action can be seen in the fact that, in 2016, Dartmouth graduated more women in engineering science than men, said Ray, to a big round of applause.

“A lot of colleagues asked, how did you do this? It is another piece of the liberal arts education, because we bring students in the door at Dartmouth,” Ray said. “But we don’t admit them into engineering. We admit them through the College, and they come, they explore, they learn critical thinking skills, they take a language, they have an opportunity to study abroad. They’re not giving up any of that, which I think is very important to women.”

As the discussion concluded, Will invited Hanlon to the stage for closing comments. Hanlon invited the audience and the panel to join him in a thought experiment to imagine what higher education would look like in 50 years—in 2069.

“When we’ll all be back for reunions,” he said.

He asked his listeners to look back to 1969 and imagine what they would have predicted Dartmouth would look like in 2019. “If you had guessed that there would be major changes in curriculum, or teaching methods, or key extra-curriculars, you would have been wrong. Those things are pretty much the same.”

Dartmouth remain committed to “building a campus that is safe, equitable, diverse and inclusive,” Hanlon said.

Over the next 50 years, the trend of increasing access and affordability that dates back to the creation of the land-grant colleges in the 19th century will reverse, Hanlon predicted. The move away from four-year private liberal arts colleges for much of the population will continue. Instead, more people will turn to online learning and professional credentialing, which allows for a range of educational certifications that require less time and can be accessed from anywhere, he said.

But the other side of the coin is that institutions like Dartmouth will be prized for their commitment to liberal arts and a broad education, he said.

People with skills that cannot be replaced by artificial intelligence—extreme creativity, the ability to synthesize information, judgement, leadership, and emotional intelligence—will be highly valued, Hanlon said. “What we do now is going to be even more in demand.”

Near the end of the event, two women interrupted the speakers, carrying a banner that read “DIVEST,” and asked the College to address climate change and divest any investments in fossil fuel businesses. Helble thanked the women and said he would talk with them after the event. Will called the interruption “our homegrown disruptive experience.” 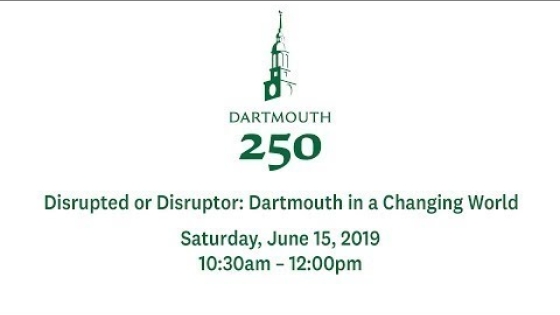 The following reading list was created as a follow-up to the event:

A Lot of People Are Saying: The New Conspiracism and the Assault on Democracy by J. Russell Muirhead and Nancy Rosenblum

“How to Save Globalization: Rebuilding America’s Ladder of Opportunity” (Foreign Affairs), by Kenneth F. Scheve and Matthew J. Slaughter

In Defense of Liberal Education by Fareed Zakaria

College: What it Was, Is and Should Be by Andrew Delbanco

“The Liberal Arts May Not Survive the 21st Century” (The Atlantic), by Adam Harris

A Chance in the World: An Orphan Boy, a Mysterious Past, and How He Found a Place Called Home by Steve Pemberton and Thomas Nelson

“Traveling Through the Dark,” a poem by William E. Stafford