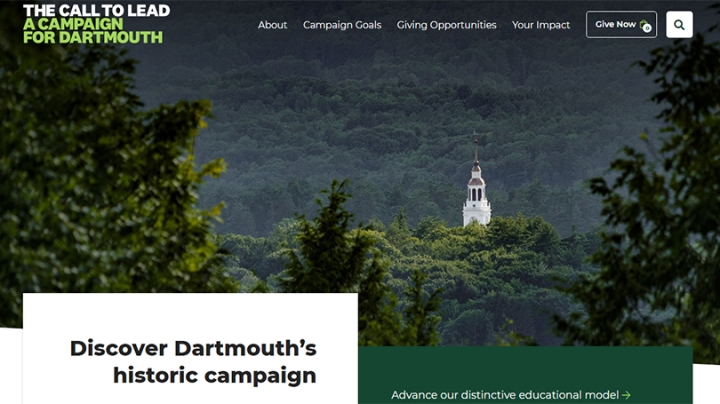 Communications about the Call to Lead campaign won several awards from the Council for Advancement and Support of Education (CASE).
6/18/2019
Body

Dartmouth has received seven Circle of Excellence Awards from the Council for Advancement and Support of Education (CASE), including a grand gold award for The Call To Lead: a Campaign for Dartmouth.

The awards recognize several communications pieces about the College’s $3 billion Call to Lead capital campaign, produced by the Office of Advancement Communications; the Centennial Circle program, an effort to develop the power of women’s philanthropy; a philanthropy report on the Tuck School of Business capital campaign, The Tuck Difference: The Campaign for Wise Leaders; and an Office of Communications video about a faculty-led research and teaching expedition in Greenland.

In addition to the Circle of Excellence Awards, CASE recognized Dartmouth—along with Harvard and Stanford—for “overall performance” in educational fundraising in the category of private research/doctoral institutions with endowments over $1.2 billion. Dartmouth also placed in the top 10 of CASE’s ranking of the “50 Most Supportive Alumni Networks.”

“Congratulations to all of our colleagues across campus who are telling Dartmouth’s story every day with creativity and dedication,” says Justin Anderson, vice president for communications. “It’s gratifying to see their efforts recognized by our peers.”

The Circle of Excellence awards include:

CASE is the leading membership organization for educational advancement professionals. The CASE Circle of Excellence Awards “recognize hundreds of institutions whose talented staff members advanced their institutions last year through innovative, inspiring, and creative ideas,” according to the council’s website. The 399 winners in 2019 were selected from more than 3,000 entries.