Board members met during commencement weekend and attended the ceremony on the Green. 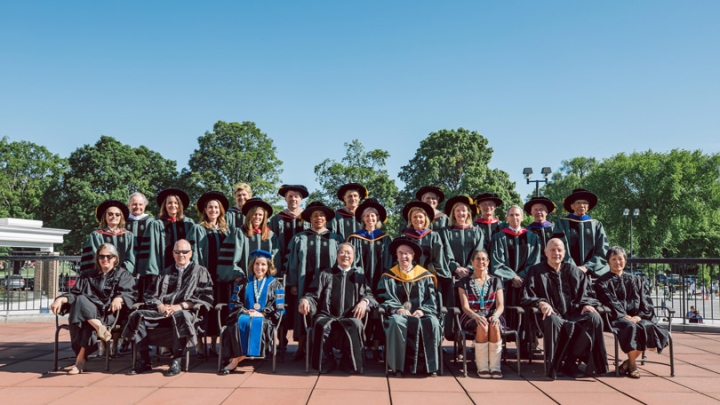 At their June meeting, the Dartmouth Board of Trustees discussed the institution’s comprehensive efforts to create a more welcoming, inclusive, and equitable environment in which academic achievement as well as personal and professional growth can be realized by all members of the Dartmouth community.

The trustees voted to adopt a new, unified sexual and gender-based misconduct policy for faculty, students, and staff. This comes after several months of consultation and revisions with input from the community that culminated in votes to adopt the policy by the Faculty of Arts and Sciences and the faculties of the professional schools. The new policy and associated processes will be implemented later this year.

“This single policy creates clear and consistent expectations to ensure a reliable and impartial institutional response to sexual misconduct claims, and it establishes appropriate processes for adjudicating potential violations of the policy,” said President Philip J. Hanlon ’77. “We welcome this as one of a number of important steps toward creating a learning environment free from sexual harassment and abuse of power, and ensuring that behaviors and relationships in all contexts on campus are consistent with our values.”

Title IX Coordinator and Clery Compliance Officer Kristi Clemens and Associate General Counsel Dana Scaduto led a discussion on the current complexities and successes in addressing the needs of the Dartmouth community under Title IX. They advised the board about anticipated changes under proposed U.S. Department of Education Office for Civil Rights regulations and about plans for the Title IX Office in the coming year.

The Title IX Office has expanded its ability to serve students, faculty, and staff by adding three new full-time positions, including two new mental health professionals. Clemens said she will begin producing an annual report on Title IX complaints and outcomes to better inform the community and direct the goals of the office. She highlighted plans for reviewing and upgrading training and outreach to the campus community, as well as the implementation of new campus policies and processes.

The board received an update on the Campus Climate and Culture Initiative (C3I), launched in January 2019, from Provost Joseph Helble and Theodosia Cook, director of the initiative. C3I expands upon the recommendations for institutions of higher education made in the National Academies of Sciences, Engineering and Medicine (NASEM) report Sexual Harassment of Women: Climate, Culture, and Consequences in Academic Sciences, Engineering, and Medicine.

“C3I addresses the challenging societal issue of sexual harassment and the abuse of power through an evidence-based approach,” said Helble. “It is designed to remove every possible barrier to create an environment where students, faculty, and staff can reach their full potential based on their talent, curiosity, and hard work. We have laid out a series of objectives for ourselves, and in five months we have made significant progress.”

Cook highlighted elements of that progress, including passage of the sexual and gender-based misconduct policy (adopted by the board during the meeting), completion of mandatory Title IX training for faculty and staff, and the start of the first two academic department climate reviews in a campus-wide program. Cook also shared that a leadership development program would be launched this fall focusing initially on deans, faculty chairs, and others in positions of significant leadership. Also, there is now a requirement that all graduate programs establish research advisory committees for the oversight of theses and dissertations, making it mandatory for graduate students to have a committee rather than one adviser overseeing their work.

Members of the C3I External Advisory Committee, charged with evaluating progress on the initiative through regular reports to the trustees, also met with the board. The committee is chaired by Gilda Barabino, chair and dean of The Grove School of Engineering at The City College of New York. Also serving on the committee are Dartmouth-Hitchcock Health CEO and President Joanne Mather Conroy ’77; Susan Finegan ’85, chair of the Pro Bono Committee at the law firm Mintz Levin; Cynthia Barnhart, chancellor of the Massachusetts Institute of Technology; and William Scheiman ’14, a consultant at Bain & Co. and a former member of Dartmouth’s Student and Presidential Committee on Sexual Assault.

“It is critical for any institution genuinely interested in making progress to successfully eliminate sexual harassment, to have leadership and engagement by the board of trustees and the president,” said Barabino. “They must take a strong, proactive stance to foster change through the creation of a culture of accountability.”

Dartmouth is doing just that, said trustee Chair Laurel Richie ’81. “The actions taken at this meeting and the sustained focus of the administration and board on this issue make it clear that we take seriously our responsibility to lead on this important issue.”

A Tip of the Cap

“We are grateful to each of these talented alumni for their hard work in service to Dartmouth,” said Richie. “Their dedication, energy, and stewardship reflect the strength of their loyalty and commitment to the current and future students, faculty and staff.”

The board also met with and recognized Marcelo Gleiser, the Appleton Professor of Natural Philosophy and Professor of Physics and Astronomy at Dartmouth, who last month received the 2019 Templeton Prize. The prize is one of the world’s largest annual individual awards and honors a person who has made an exceptional contribution to affirming life’s spiritual dimension, whether through insight, discovery, or practical works. In receiving the award, Gleiser joins an eminent roster of 48 past awardees, including Mother Teresa, Archbishop Desmond Tutu, and the Dalai Lama.

The trustees received updates on new construction and upgrades of facilities across campus. They approved $9.66 million for capital renewal construction of Reed Hall, which will improve accessibility, mechanical systems, lighting, and other infrastructure elements in the building. The work is expected to take place from December 2019 through July 2020, with faculty swing space provided in the new Dana building, when it is completed, and at 37 Dewey Field Road.

Trustees also approved $67.2 million for construction of the Arthur L. Irving Institute for Energy and Society building and for energy efficiency improvements at the Murdough Center, also located on the west end of campus. Those changes will be made while construction is taking place on the Thayer School of Engineering/computer science building, between fall 2019 and summer 2021.

The trustees remained in Hanover throughout the weekend to participate in commencement-related activities, including Class Day exercises for the undergraduate Class of 2019; investiture ceremonies for the Guarini School of Graduate and Advanced Studies, Thayer School of Engineering, and Tuck School of Business, as well as the ROTC military commissioning ceremony; the Phi Beta Kappa induction ceremony; and the annual baccalaureate service for all graduates. In addition, board members attended a luncheon with members of the Class of 1969, who celebrated their 50th reunion this weekend.

Commencement drew approximately 11,000 guests to the Green on a spectacularly sunny day in Hanover as Dartmouth awarded 1,055 bachelor’s degrees in the arts and sciences, 116 bachelor of engineering degrees, and 757 master’s and doctoral degrees from Guarini, Tuck, Thayer, and the Geisel School of Medicine.

The board reviewed and approved appointments and promotions to faculty positions at Geisel, Thayer, and Tuck.

Cellist Yo-Yo Ma, a 19-time Grammy winner and two-time Dartmouth Montgomery Fellow  delivered this year’s commencement address and mesmerized the crowd with a stirring performance of a Catalonian folk song.  Honorary degrees were also awarded to Richard “Sandy” Alderson ’69, former general manager and current senior adviser to baseball operations for the Oakland Athletics; France Córdova, an astrophysicist and director of the National Science Foundation; Rebecca Heller ’05, executive director and co-founder of the International Refugee Assistance Project; Hilary Tompkins ’90, an environmental attorney who has served as solicitor for the U.S. Department of the Interior; and Tod Williams and Billie Tsien, award-winning architects who designed the recent renovation of the Hood Museum of Art.