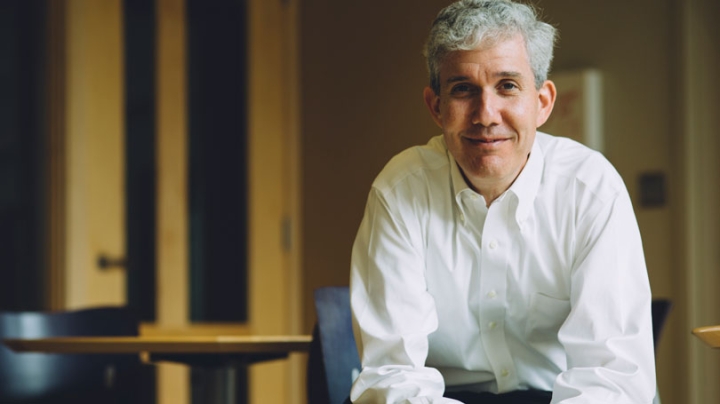 “It has been an honor to lead this wonderful learning community and to work with our talented faculty, students, alumni, and staff,” says Dean Matthew Slaughter. (Photo courtesy of the Tuck School of Business)
6/17/2019
Body

Matthew J. Slaughter, the Paul Danos Dean of the Tuck School of Business, has been appointed to a second term, Provost Joseph Helble announced today.

“I am pleased that Matt will continue to bring fresh ideas to Tuck for another four years,” says Helble. “The Tuck community has been enriched by Matt’s inspiring leadership and the innovative ways he is making Tuck a stronger and even more vibrant school.”

A scholar of international economics and an expert in globalization, Slaughter has held leadership roles at Tuck since joining the faculty in 2002. His second four-year term as dean begins on July 1.

“It has been an honor to lead this wonderful learning community and to work with our talented faculty, students, alumni, and staff, all of whom have contributed in ways both large and small to our current momentum,” says Slaughter. “I look forward to building on that momentum in the next four years and to continuing our important work of educating wise, decisive leaders ready to take on the world’s most complex challenges.”

During his first term as dean, Slaughter led the articulation of a fresh mission and strategy for the school, which framed broadscale changes to the MBA program’s foundational first-year core curriculum. These enhancements, which included structural changes to the academic calendar and a new sequence of data analytics courses, have laid the groundwork for a more rewarding MBA experience for students. At the same time, they created a process for ongoing innovations to the Tuck curriculum, its cocurricular components, and the student career journey.

Slaughter led the strategic expansion of Tuck’s portfolio of nondegree programs, launching the Next Step program for military veterans and elite athletes; a December session of Business Bridge, a program for liberal arts undergraduates; and TuckLAB, a business- and entrepreneurship-focused offering for Dartmouth undergraduates. Under his leadership, the school also developed a new flagship program for senior executives (the Advanced Management Program) and strengthened the fiscal outlook and impact of other longstanding Tuck Executive Education programs.

Central to all of these initiatives has been a continued focus during Slaughter’s deanship on Tuck’s people. Since becoming dean, Slaughter has actively worked to build a faculty of the future at Tuck, adding several globally recognized scholar-educators across Tuck’s academic groups and promoting leading members of the faculty. Slaughter has also strengthened the school’s academic and administrative leadership, with new appointments to the deans’ office and key additions to roles related to the student experience, including in admissions and career services.

Slaughter’s first term as dean saw the record-breaking launch of The Tuck Difference: The Campaign for Tomorrow’s Wise Leaders, part of Dartmouth’s $3-billion comprehensive capital campaign. To date, Tuck has raised $181.5 million toward its goal of $250 million in support of increased student scholarships and faculty support; its MBA program and nondegree business education offerings; and upgraded facilities and infrastructure.

“The energy and optimism we feel about Tuck’s future is in every way a reflection of Matt’s leadership,” says Tuck Board of Advisors Chair Elyse Allan ’79, Tuck ’84. “I look forward to working with Matt over the next four years and continuing the great progress Tuck has made under his deanship.”

Prior to assuming the deanship, Slaughter was associate dean for faculty and founding faculty director of Tuck’s Center for Global Business and Government. He had previously served as associate dean of the MBA program. From 2005 to 2007, he served on the Council of Economic Advisers in the Executive Office of the President of the United States.