Dartmouth Astronomer on Leading Discovery of a New Planet 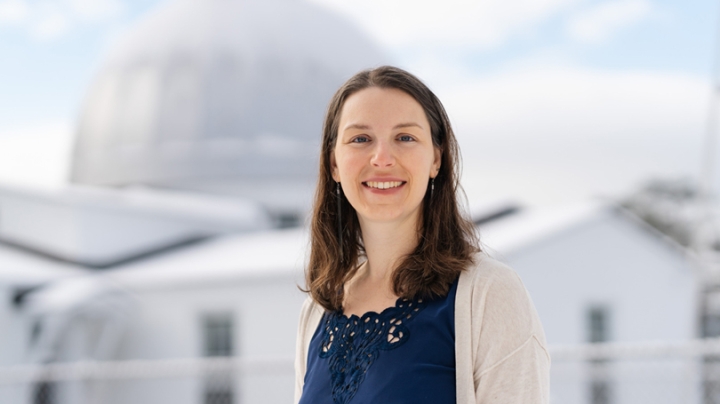 Elisabeth Newton, an assistant professor of physics and astronomy, has led a team that discovered a new exoplanet. (Photo by Eli Burakian ’00)
8/14/2019
Body

Assistant Professor of Physics and Astronomy Elisabeth Newton, who led the research team that recently found an exoplanet—a planet outside our solar system—expects that this major discovery will yield valuable knowledge about how planetary systems form and change.

“One of the overall goals of astronomy is understanding the big picture of how we got here, how solar systems and galaxies take shape,” says Newton. “By finding solar systems that are different from our own—especially young ones—we can hope to learn why Earth and our own solar system evolved in the ways that they did.”

The planet, called DS Tuc Ab, orbits a bright young star. The star has been well studied, but the planet had been previously unknown. And even though DS Tuc Ab is about 45 million years old, it’s just a preteen, in astronomical terms. Now six times bigger than Earth, between the sizes of Neptune and Saturn, DS Tuc Ab is no longer growing, but it is still evolving. It’s thought to have a large gaseous envelope and be losing atmospheric gas, which means that it could shrink over time.

DS Tuc Ab was first observed as part of NASA’s Transiting Exoplanet Survey Satellite (TESS) mission in November 2018 and was confirmed in March by Newton’s research team, which includes scientists from the University of North Carolina at Chapel Hill, the University of Texas at Austin, and other research centers from around the world. TESS looks for exoplanets that block the light of the stars they orbit, as they pass between Earth and the host star.

“What we had was evidence that every eight days, DS Tuc Ab’s star briefly dimmed in a way that looked like it could be caused by a planet crossing in front of it,” says Newton. Next, the team had to narrow down the cause for that variation in brightness. “There are a number of false positive scenarios we had to rule out,” Newton says.

For example, the dimming could have been caused by the movement of binary stars rather than a planet. Also, telescopes create instrumental “noise” that could distort the measurement of brightness.

“It took a lot of data to arrive at our conclusion that there wasn’t another star in the background,” says Newton. Some of that data came from the Southern African Large Telescope (SALT), to which Dartmouth has access. “If you have binary stars, SALT allows you to detect them moving back and forth. But in this case, we didn’t see evidence of that. We saw only one star.”

Newton clearly remembers the day—actually, the night—she and her team first saw the signal of DS Tuc Ab.

“I was in South Africa at a SALT conference, Skyping back to my colleagues in the U.S. around midnight. It was a very long email train,” Newton recalls.

“We weren’t exactly shocked, because this was what we had set out to find. But we were surprised at how young it is, and how bright the star it orbits is. Most of the planets being found by the transit method are much older and orbit faint stars. So we were really excited when we confirmed this discovery, because the planet orbits such a bright, well-known young star.”

The study of exoplanets is expanding knowledge about how planets are built, Newton says. Scientists are learning that the construction process varies more than previously thought.

Newton’s team made the DS Tuc Ab discovery, which was announced last month in the journal The Astrophysical Journal Letters, shortly after she joined Dartmouth’s Department of Physics and Astronomy.

When she’s not peering through telescopes or sifting through reams of data, Newton reaches for heights in a different way—by rock climbing.

“Another reason I love living in Northern New England,” she says, “is that there’s not much light pollution, so you can usually see the stars at night”—a matter of no small importance.