Young Planets With Teenage Sun Give Space Studies a Lift

Elisabeth Newton co-leads a team that has found a new planetary system. 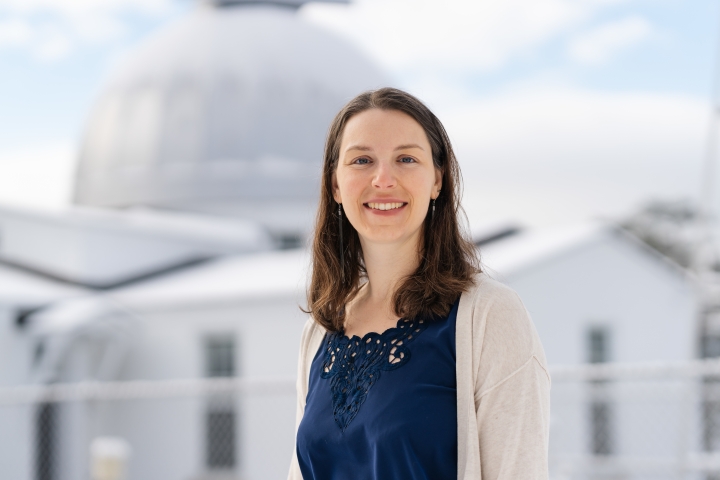 Elisabeth Newton, assistant professor of physics and astronomy, co-leads a research team that is searching for distant planets. (Photo by Eli Burakian ’00)
2/11/2021
Body

A newly discovered planetary system will provide researchers with the rare chance to study a group of growing planets, according to research co-led by Dartmouth.

The new system, named TOI 451, is made up of at least three neighboring planets that orbit the same sun. The planets range in size between that of Earth and Neptune. 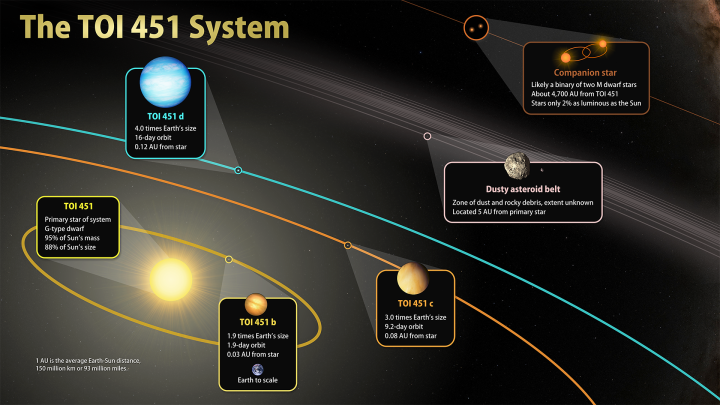 This illustration sketches out the main features of TOI 451, a triple-planet system located 400 light-years away in the constellation Eridanus. (Graphic courtesy of NASA/Goddard Space Flight Center)

NASA’s Hubble Space Telescope and its planned successor, the James Webb Space Telescope, can be used to study the atmosphere of each planet, according to the research team. Such research could lead to information on how planetary systems like our own solar system evolve.

“The sun in this planetary system is very similar to our own sun, but much younger,” says Elisabeth Newton, an assistant professor of physics and astronomy who co-leads the research team. “By studying these planets in the context of others, we can piece together the picture of how planets form and develop.”

The discovery of TOI 451, published in the Astronomical Journal, began in 2019 through the review of data from NASA’s Transiting Exoplanet Survey Satellite (TESS).

Newton and the research team found all three planets using data from TESS. Once the discoveries were made, follow-up work was done using NASA’s Spitzer Space Telescope, the ground-based Southern African Large Telescope and other resources. Overall, more than 50 researchers representing dozens of institutions contributed to the research.

“The dataset from TESS is really unmatched for discovering these kinds of young planets,” says Andrew Mann, an assistant professor at the University of North Carolina at Chapel Hill and research co-lead. “We are fortunate to be working in a time where we have access to data from such a successful exoplanet mission.”

The planets complete full orbits around their sun on timescales ranging from about two days to 16 days. The host star is similar in mass to Earth’s sun, but much younger at only 120 million years old.

“The sun of the newly discovered planets is like a teenager compared to our own sun. That means its planets are still changing and evolving,” said Newton.

The star and its planets are part of the Pisces–Eridanus stellar stream, an association of young stars that stretches across much of the southern galactic hemisphere. The association of stars and its age were previously identified by separate teams using data from TESS and the European Space Agency’s Gaia spacecraft.

According to NASA, there are over 4,000 known planets outside of the solar system. Most of these planets are older and much farther away from Earth than the new system.

While most discoveries are single planets, other multi-planet systems have been found in the past. Only seven other young systems with multiple transiting planets have been discovered, according to the research team.

The finding of multiple planets in the same system allows researchers to compare the development of the individual bodies, knowing that they formed and evolved around the same sun.

In addition to the planets, researchers have also found evidence of a disk of debris that is “dustier” but otherwise similar in ways to the solar system’s own asteroid belt.

In 2019, the research group discovered DS Tuc Ab, an exoplanet orbiting one of the brightest young stars known.