Bentley Bust: The Story Behind a Curious Tradition

Dartmouth students have for many years rubbed the bust’s nose for luck. 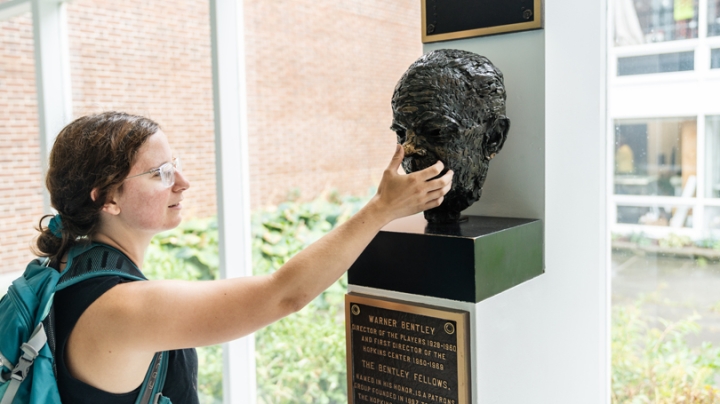 Keira Byno ’19 takes part in an old tradition at Dartmouth: rubbing the nose of the Bentley bust when walking past it. (Photo by Eli Burakian ’00)
9/20/2019
Body

For decades, Dartmouth students have rubbed the nose of a bust in the Hopkins Center for the Arts for luck, but they might not all know the story behind this beloved Dartmouth custom.

Commissioned by the College trustees, the bust was created in 1968 by South African-born sculptor Thomas Bayliss Huxley-Jones during his second artist’s residency at Dartmouth. It depicts Warner Bentley, who came to Dartmouth in 1928 to direct the College’s theater program.

Bentley, who directed more than 200 theatrical productions on campus, was influential in the opening of the Hopkins Center and became its first director, in addition to his longtime post as a lecturer in the Department of English. During his time at the College, he received an honorary master of arts degree, and in 1991, Dartmouth awarded him the inaugural Presidential Medal for Outstanding Leadership and Achievement.

In 1969, after 41 years at Dartmouth, Bentley retired, a milestone that was covered in the pages of Variety, which noted that Bentley helped establish the Hopkins Center. In a letter to the Valley News, Bentley wrote, “What a great time we all had watching this wonderful community grow and prosper in its contribution to the arts and to academic tradition.”

In his honor, the Hopkins Center instituted the Bentley fellows membership program, which supports the mission-driven study, creation, and presentation of the arts at the Hop.

At Bentley’s retirement party, he was presented with the bust. Since then, countless hands have rubbed the bust’s nose for good luck, wearing away the patina on the sculpture’s nose and revealing the bronze underneath.

But Dartmouth’s nose-rubbing tradition didn’t begin with the Bentley bust. Since the early 1930s, students have rubbed the nose of another bust, this one in Dartmouth Library’s Baker-Berry Library. It is of Dean Craven Laylock, Class of 1896, who is most famous for demanding that Theodor Geisel, Class of  ’25, end his relationship with humor magazine The Dartmouth Jack-O-Lantern, leading the student to adopt the moniker of “Seuss,” an early version of his famous pen name, Dr. Seuss.

However, rubbing the nose of the Bentley bust became students’ preferred method of seeking good luck soon after it was installed. The custom even spurred a theater group composed of Dartmouth alumni and aptly named Bentley’s Nose, and gained national attention when it was mentioned by Grey’s Anatomy character Meredith Grey in an episode of the show, produced by Shonda Rhimes ’91.

Today, the Bentley bust is situated across from the Jaffe-Friede Gallery, just around the corner from the entrance to the Warner Bentley Theater, also named in Bentley’s honor.

Julie Bonette can be reached at Julie.Bonette@dartmouth.edu.