Jhon Ortiz ’20, a sergeant in the National Guard, assisted in the evacuation of Iraq’s Basra consulate. 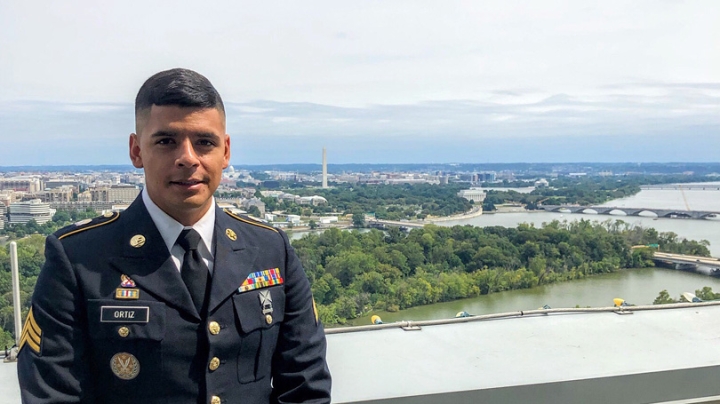 Jhon Ortiz ’20 earned a Meritorious Honor Award for security duties he performed while deployed in Iraq in 2018. (Photo courtesy of Jhon Ortiz ’20)
9/16/2019
Body

Jhon Ortiz ’20, a sergeant in New York’s National Guard and a Dartmouth ROTC cadet, has received a Meritorious Honor Award from the U.S. Department of State for duties he performed while deployed in Iraq in 2018.

The award is presented to groups or individuals in recognition of a special act of service or sustained outstanding performance. Ortiz, who received the award Sept. 5 at a state department ceremony in Arlington, Va., says he earned the commendation while working with Diplomatic Security Service (DSS), a branch of the state department charged with protecting U.S. officials and personnel on department bases and consulates abroad.

During his deployment between fall 2017 and winter 2019, Ortiz was assigned to assist in receiving, storing, and transporting equipment and facilitating the movement of personnel in and out of Baghdad. 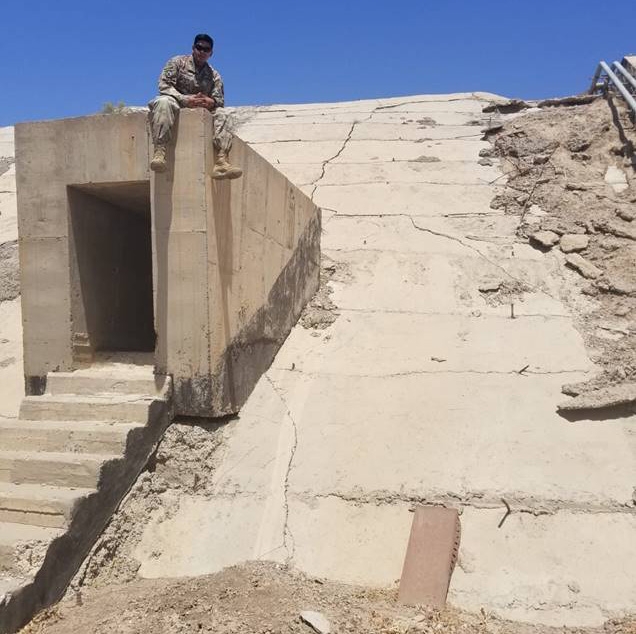 Jhon Ortiz ’20 perches on top of one of Saddam Hussein’s bunkers near the Baghdad airport during his deployment in Iraq. (Photo courtesy of Jhon Ortiz ’20)

Facing increasing hostilities by Iranian-backed militias, the Basra consulate was closed in October 2018, requiring the evacuation of all its personnel and securing its equipment. “I was located in the Baghdad Diplomatic Support Center, which was the only base that was close enough and had the capability of storing, housing, and transporting all of the Basra Consulate’s people and equipment,” says Ortiz.

Ortiz devised a system to store massive amounts of cargo and equipment coming fast and furiously into Baghdad.

“There were more than 200 trucks coming in during the span of two or three weeks, all carrying containers that had just about half a ton of equipment in them, and all of them were being driven by local Iraqi contractors. Screening and security were a main concern, because we did not know who among those local people was sympathetic to hostile groups. Luckily, we did not have any incidents during that time,” Ortiz says. 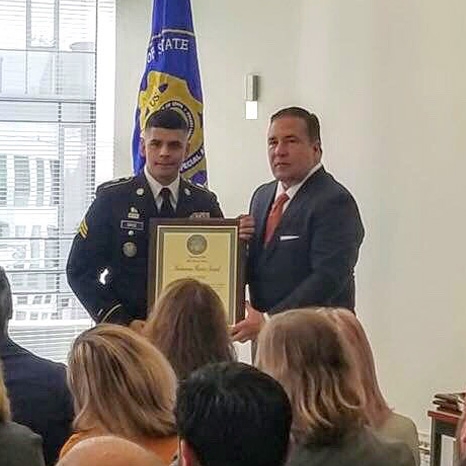 At the ceremony, Ortiz received a plaque that reads: “For exceptional devotion to duty, enthusiasm, and exemplary conduct during the period of October 3 to October 18, due to the evacuation of Consulate Basrah and reception of 58 flights comprised of 114 vehicles and 662.333 lbs. of materials.”

For Ortiz, a Middle Eastern Studies major who plans to graduate this fall and pursue a master’s degree in international relations, the awards ceremony was both inspiring and motivating—especially because he received the honor from a high-ranking State Department official, Assistant Secretary for Diplomatic Security Michael Evanoff.

“Listening to the stories of the other awardees reinforced my interest in working in the foreign service in the future,” Ortiz says. “One of those stories was about a foreign service officer who helped dismantle a major human-trafficking organization in Romania. Another involved the U.S. ambassador to Saudi Arabia who had an issue with his convoy when he was traveling in that country.”

Susan Redwine, who directs Dartmouth’s ROTC program, says Ortiz quietly sets a high bar for other cadets who have received military commissions. “It’s pretty rare from someone in the armed services to receive a state department award,” she says.

“And this was not a safe deployment. I worry that people forgot about Iraq, after our troops withdrew, but then ISIS came back, and it is a high-risk environment. When Jhon came back to finish his degree here, he didn’t talk about Iraq all that much, because he is a soft-spoken guy, but he does assert himself in a quiet, confident way, and we are proud of him.”

Ortiz says his service in Iraq underscored the importance of “getting to know and understanding the people you are dealing with. When you know more about the ideas that shape their actions, you can achieve more in terms of cross-cultural interactions, and resolve misunderstandings.”