The film about Maine’s child-welfare practices was co-produced by Dartmouth’s N. Bruce Duthu ’80. 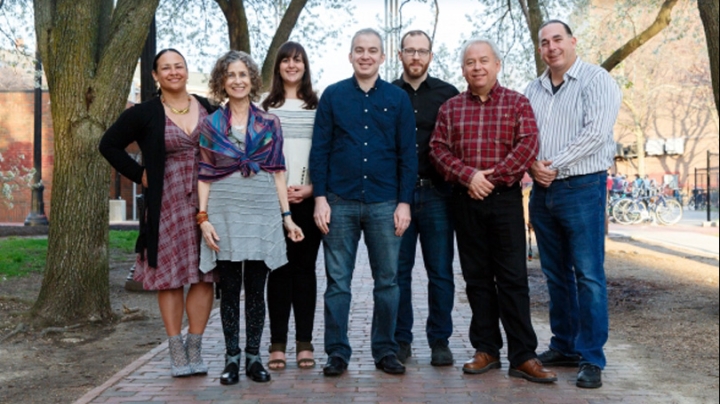 Professor N. Bruce Duthu ’80, second from right, joins other members of the film crew at the Boston premiere of Dawnland on April 28, 2018. (Photo credit of the Upstander Project)
9/27/2019
Body

Dawnland, a documentary co-produced by Samson Occom Professor of Native American Studies N. Bruce Duthu ’80, has won an Emmy award for research. The film, which traces the historically negative impact of Maine’s child welfare practices on Native American communities, was carried by many PBS stations as part of the network’s Independent Lens series. It was among several PBS programs honored Sept. 24 at the 40th annual News and Documentary Emmy Awards ceremony at Lincoln Center’s Alice Tully Hall in New York City.

“We’re especially pleased that the teams from Dawnland, Wildland, and I Am Not Your Negro were recognized for their exceptional storytelling. These films allow people to find unity in divided times by creating empathy and a deeper understanding of complex, urgent social issues,” said Independent Lens executive producer Lois Vossen.

Dawnland tells a troubling story based on a wide range of interviews and reams of documents. For decades, child welfare authorities removed Native American children from their homes and placed them in non-native foster care, where many of the children were pressured to cut ties with their families and their culture. In Maine, the first official “truth and reconciliation commission” in the United States began an unprecedented investigation. Dawnland goes behind-the-scenes as this historic body grapples with difficult truths, redefines reconciliation, and charts a new course for state and tribal relations. Christopher Newell ’96, a member of the Passamaquoddy tribe in Maine, was senior adviser on the film.

Duthu, who is leading a Native American Studies domestic study program in Santa Fe this term, learned about the research award via social media Tuesday night.

“I’m thrilled, honored and humbled by the academy’s recognition of Dawnland, and particularly, the team’s research work that informed so much of the film’s content,” says Duthu. “The recognition serves as testament to the importance of uncovering and sharing stories like these, which help move the needle of social justice in a positive direction. For Native American Studies, it’s also affirmation of the important work we do to illuminate the experiences of Native peoples, both historically and in the contemporary era, to learn where we’ve been as a nation and to chart how far we’ve yet to go.”