Sexual Violence Prevention Project Is Launched for the ’23s 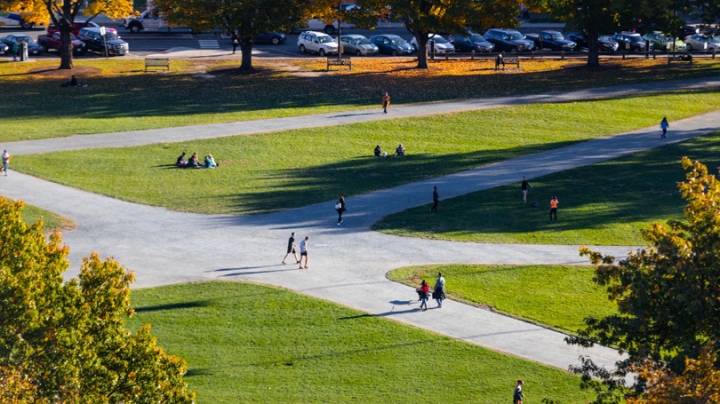 The incoming Class of 2023 is the first class to officially participate in a new comprehensive program designed to foster positive behaviors and prevent sexual violence on campus.

The Sexual Violence Prevention Project (SVPP) First-Year Experience is a three-part curriculum that is the first piece of an initiative in which students will eventually participate throughout all four years of their undergraduate careers.

SVPP grew out of the College’s Moving Dartmouth Forward (MDF) initiative, which was launched in 2015 to address high-risk behavior among undergraduates. Along with Inclusive Excellence, and the Campus Climate and Culture Initiative, MDF is one of three ongoing initiatives that Dartmouth has created in the past five years to combat high-risk behavior; improve the College’s commitment to diversity, equity, and inclusivity; and address sexual misconduct and other abuses of power.

“If we really want to see changes in our community, we need to change the culture,” says Dean of the College Kathryn Lively. “Students, faculty, and staff deserve to be part of a community where they feel safe and supported and have the ability to thrive.”

The new students completed the first component of the SVPP First-Year Experience—a short online course called “Sexual Assault Prevention for Undergraduates”—before they arrived on campus. The purpose of the online course is to give all incoming students foundational knowledge and a common language around issues of sexual violence and the College’s expectations for their behavior as members of the Dartmouth community, says Amanda Childress, associate director of the Student Wellness Center, which has led the design and development of SVPP.

“We want all students to arrive on campus with a common frame of reference,” Childress says. “And we want the ’23s to know that they are coming into a community that cares about their success and their well-being.”

The second component of the experience was built into New Student Orientation programming, which occurred the week before classes began. As part of their orientation, the ’23s participated in two sessions that introduced them to the College’s community principles, resources, standards of conduct, the Dartmouth Bystander Initiative, and strategies for developing healthy relationships during their Dartmouth career.

Over the course of the fall and winter terms, the ’23s will engage with the third component of the program—student-led small-group discussion sessions focused on how to access resources related to supporting a friend and reporting sexual violence; setting positive relationship goals; learning about diversity and identity; and bystander intervention. Students will participate in a total of four of these sessions.

“The student-led sessions are opportunities to build skills,” Childress says. For example, of the session on healthy relationships, she says, “It’s an opportunity for them to reflect on what they’re looking for in both friendships and in intimate partners—to connect what they’re looking for in a relationship with their values, and learn about consent and communication.”

“Students have been involved in developing the program from the very start, through student advisory boards and surveys, as interns helping to design and develop the program, and as facilitators for the first-year sessions,” she says. “We couldn’t do this without their crucial input.”

In the next several years, the Student Wellness Center will be working to extend SVPP programming into the sophomore-, junior-, and senior-year experience. “We are currently in the process of developing the second year, working with the Greek community, athletics, the Dartmouth Outing Club’s trip and crew leaders, our student advisory board, and others as we start to build out what a meaningful sophomore-year program could look like,” Childress says.

To measure the impact of SVPP, Dartmouth is partnering with the University of New Hampshire’s Prevention Innovations Research Center to develop an assessment of the project, Childress says. “This year we’ll be collecting some baseline data and designing a mixed-methods assessment and evaluation plan. The idea is to start assessing the experiences next fall. We’ll be tracking students’ learning, attitudinal shifts, and behavioral changes from pre-matriculation to a couple of years after they’ve graduated.”

This long-term approach to assessing the project’s success is unique, she says. “Other schools are rolling out four-year experiences, but ours is different in that we are building a developmental curriculum focusing on positive behavior change, not just on building knowledge and awareness.”