Fall Brings a Wave of Presidential Candidates to Campus

The latest: Democrats Warren and Booker, and Republicans Weld and Sanford. 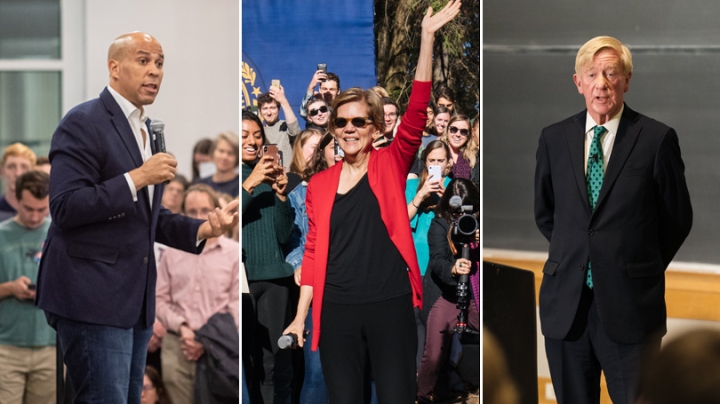 Standing in line at the Bema on a brilliant fall day to take a selfie with Sen. Elizabeth Warren (D-Mass.), Abigail Johnson ’23 said that in her first month at Dartmouth she has attended events with three presidential primary candidates: Warren, Sen. Cory Booker (D-N.J.), and Sen. Bernie Sanders (I-Vt.).

“It’s been amazing to have the candidates come to our own backyard,” she said. “It’s so easy to show up and so important to get educated about all of them.”

Warren’s campaign stop on Oct. 24, her second at Dartmouth, drew more than 1,000 students and community members to the College’s amphitheater in the pines, and her front-runner status attracted a large media contingent. As with Sanders’ rally at the Bema on Sept. 29, images of Warren on a fall day in the woods of Dartmouth turned up in national campaign stories in news outlets all over the country for days after her visit.

The fall term also brought two Republican presidential candidates to the College. Former Massachusetts Gov. Bill Weld was hosted by the Dartmouth College Republicans, drawing about 50 people to an event in Filene Auditorium. The policy discussion on climate change was followed by a wide-ranging question-and-answer session with students.

An Oct. 10 class visit by GOP presidential primary candidate Mark Sanford, former governor of South Carolina, followed a chance encounter. Sanford was in New Hampshire, visiting with Republican groups and local media, and came to campus for an interview with The Dartmouth. He was walking across campus with Peter Charalambous ’20, an editor at The Dartmouth, when they ran into Charalambous’ “Global Policy Leadership” instructor, Herschel Nachlis, a research assistant professor and a policy fellow with the Nelson A. Rockefeller Center for Public Policy. 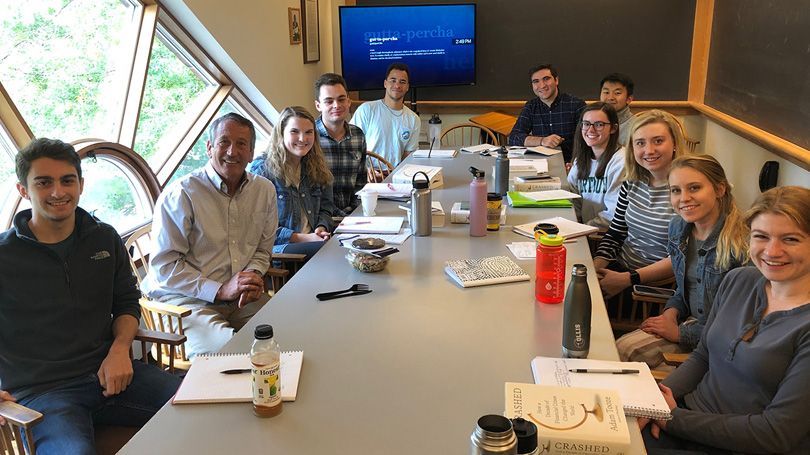 “The class is on the financial crisis and populism, and Sanford is a fiscal hawk who refused the Obama post-crisis stimulus money. Peter suggested he come to class and Gov. Sanford happily joined us for about a half hour of very interesting Q&A with the students,” Nachlis said. “This was all totally unplanned and random, and a wonderful example of the joys of campaign season at Dartmouth.”

Booker’s Sunday night campaign stop at the Top of the Hop on Oct. 20 drew a capacity crowd of more that 300 students and Upper Valley residents, with at least a hundred more listening from the lobby below. After an introduction from N.H. state Sen. Martha Hennessey ’76, Booker delivered his stump speech from the stage before mingling with the crowd as he took questions.

Johnson, the first-year student waiting in line for the Warren selfie, said the Booker event gave her a broader sense of the former mayor of Newark. That’s because Booker’s media profile has been much less prominent than that of either Warren or Sanders, she said.

“I didn’t know a whole lot about him beforehand. He was an excellent speaker and I really liked his focus on values and his ability to connect with people. I thought that was really impressive,” said Johnson, who plans to see as many candidates as she can before she decides how she will vote in the February primary.

“I think it’s important to research the candidates—who they are and what their policies are, and I think the best way to start, because we have this opportunity being in New Hampshire, is to go to a town hall or a rally,” Johnson said. “You get to go beyond their policies, you get to learn something about their personality, how they connect with people, which, if they’re going to run the country, should be important too.”

Lars Blackmore contributed to this report.