Nominations are open for alumni whose business innovations have improved the world. 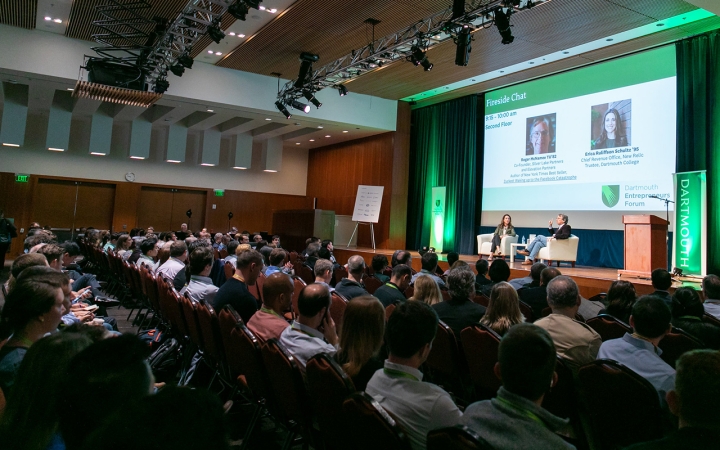 A record 618 Dartmouth-affiliated participants from around the world attended this year’s Dartmouth Entrepreneurs Forum in San Francisco, hosted in September by the Magnuson Center for Entrepreneurship. (Photo by Trish Tunne)
10/21/2019
Body

The Magnuson Center for Entrepreneurship has announced the creation of the Dartmouth Entrepreneurs Hall of Fame to honor alumni who have made positive contributions to the world through their entrepreneurial work.

Trustee Jeff Crowe ’78, a founding board member and chair of the Magnuson Center, announced the hall of fame to a record crowd of Dartmouth alumni and students at the center’s annual Dartmouth Entrepreneurs Forum in San Francisco in September.

“The Dartmouth Hall of Fame is the first of its kind and will go a long way toward celebrating those alumni leaders who have transformed their industry and shaped the world through entrepreneurship,” Crowe said. “Dartmouth has amazing alumni representation in the field of entrepreneurship, and this initiative is an exciting opportunity to champion that reality.”

Dartmouth students, faculty, alumni, and staff are invited to nominate alumni who have had an extraordinary impact on their industry. Nominees can come from any industry, including manufacturing, technology, health care, entertainment, finance, energy, and more.

Each year, three to five entrepreneurs will be inducted, selected by a committee that includes Magnuson Center Advisory Board members, Advancement, and Alumni Relations. The honorees will be announced at the next San Francisco Entrepreneurs Forum in September 2020. Nominations for the inaugural class are open through November 30 and can be submitted at the Magnuson Center’s website.

The Dartmouth Entrepreneurs Hall of Fame will be an annual event. Once construction of the new Magnuson Center in the west end of campus is complete, plaques commemorating the hall of fame inductees will be on permanent public display.

“It was a very high-energy event,” Coughlin says. “The mixture of those seeking entrepreneurial support, as well as those who can give it, is what makes the San Francisco Entrepreneurs Forum unique every year.”

The Dartmouth network on the West Coast is growing rapidly, Coughlin says. “More and more, recent graduates are moving to or returning to the West Coast. It has been such an important factor in growth of the Magnuson Center network that we now have a full-time representative based in San Francisco.”

“This is a very prestigious industry award, which involves about 250 top universities from around the globe,” Coughlin says. “This was terrific news for the center and Dartmouth.”