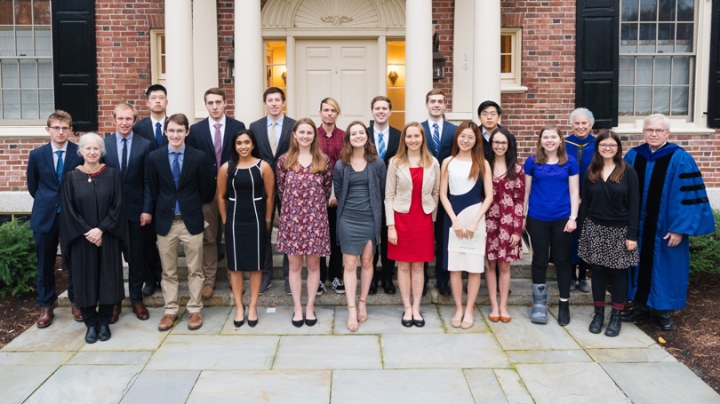 In a ceremony nearly as old as the College itself, the Alpha of New Hampshire chapter of Phi Beta Kappa on Oct. 22 welcomed 21 new members from the Class of 2020.

Lynn Higgins, the Edward Tuck Professor of French, serving as marshal for the chapter, led the students to their seats at the President’s House, where the ceremony took place.

Chapter president Dennis Washburn, the Burlington Northern Foundation Professor in Asian Studies in Honor of Richard Bressler ’52, and associate dean of the faculty for interdisciplinary programs, called the 232nd annual meeting to order.

“Before beginning, allow me to note that the Dartmouth chapter, Alpha of New Hampshire, is the fourth oldest chapter in Phi Beta Kappa. Consequently, the language and the ritual may strike you as a bit archaic,” Washburn said. “Of the three principles—fraternity, morality, and literature—it might be useful to know that literature was used in the 18th century to mean ‘knowledge,’ and ‘fraternity’ was regarded as companionship in the pursuit of knowledge.”

The criteria for induction into the society are not easy for students to meet, said Kate Soule, chapter secretary and director of finance and administration in the arts and sciences division. To be selected, undergraduates must be among the top 20 cumulative grade-point-average earners in their class after eight terms, within three years of matriculation.

The chapter’s acting vice president, Margaret Graver, the Aaron Lawrence Professor in Classics, gave a brief history lesson, beginning with Dec. 5, 1776, when a group of students from the College of William and Mary in Virginia met in a tavern to form the Phi Beta Kappa Society. Branches followed at Yale, Harvard, and Dartmouth.

In the 1830s there was a decline in debating in the social clubs, prompting faculty members of the New Hampshire Phi Beta Kappa chapter to make outstanding scholarship the primary standard for election.

“So, this afternoon you men and women of Dartmouth are being admitted to membership in an honorary, scholastic society. The honor is one attained only by a combination of high intellect, an inquiring mind, and the capacity for sustained hard work, and it is a pleasure for me to be taking part in conferring that honor,” Graver said.

The following students from the Class of 2020 were inducted (three in absentia):

“This College is and should be dedicated first and foremost to the life of the mind,” Washburn said, congratulating the new members. “Phi Beta Kappa is a most tangible recognition that all of you join us in this commitment.”

Each inductee received a certificate along with encouragement to be active in Phi Beta Kappa activities, wherever they choose to live after graduation. Soule taught them the “secret” handshake, and held up an oversized “selfkey” in the shape of the centuries-old Phi Beta Kappa key, asking that the new members take selfies with it and post them on social media.

George O’Toole, a professor of microbiology and immunology, was elected as honorary member of Phi Beta Kappa, and Steven Doig ’70, who teaches journalism at the Walter Cronkite School of Journalism and Mass Communication at Arizona State University, was elected an alumni member of the society.  Soule invites Dartmouth faculty who belong to Phi Beta Kappa to contact her so that they can be included in local chapter activities.

Sophomores were also recognized for their accomplishments, with the prize offered annually to students with the highest academic ranking after completing five terms at Dartmouth, no later than two years after matriculation.

At a reception following the ceremony, Anjali Prabhat ’20 chatted with her parents, Anita and Vin Prabhat, who travelled from New Jersey for the induction. Academic excellence runs in the family: Vin Prabhat became a member of Phi Beta Kappa 30 years ago at the University of Pennsylvania and said he was pleased that his daughter has attained the same honor.

“My college experience was wonderful, and I know she’s loved being at Dartmouth for four years. The school spirit here is amazing.”

Anjali Prabhat is planning to attend medical school. “Having that end goal in mind really does motivate me,” she said. “But also, I’m an anthropology major. I’ve been passionate about classes that are geared toward my interests. So it hasn’t been a burden to study hard.”