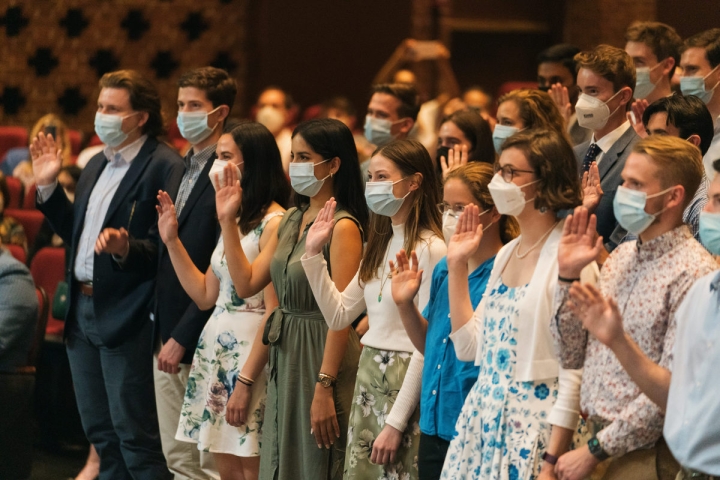 Inductees to the Dartmouth chapter of Phi Beta Kappa pledge to adhere to the principles of the society during the ceremony on Saturday in Spaulding Auditorium. (Photo by Eli Burakian ’00)
6/11/2022
More Reading

Family and friends watched and applauded Saturday afternoon as 121 students were inducted into the Dartmouth chapter of Phi Beta Kappa, the nation’s oldest honor society, at a ceremony in Spaulding Auditorium.

They were chosen as new members on account of their exceptional scholastic achievements.

Ernest Everett Just 1907 Professor of Biological Sciences Magdalena Bezanilla was made an honorary member, and Michael W. Jennings ’72, professor emeritus of modern languages at Princeton University, was elected an alumni member in absentia.

The ceremony returned to its centuries-old traditional format after having been held in virtual and hybrid sessions during the pandemic.

“I would like to acknowledge at the outset that to achieve recognition of the sort that students will receive today in an educational environment such as we’ve experienced for the past few years is even more of an accomplishment than in typical years,” said Phi Beta Kappa - Alpha of New Hampshire chapter President Andrew Samwick, the Sandra L. and Arthur L. Irving ’72a P’10 Professor of Economics.

Following a proclamation of the intention to induct new members, chapter Marshal Roberta Stewart, a professor of classical studies, led the procession of students into the auditorium. 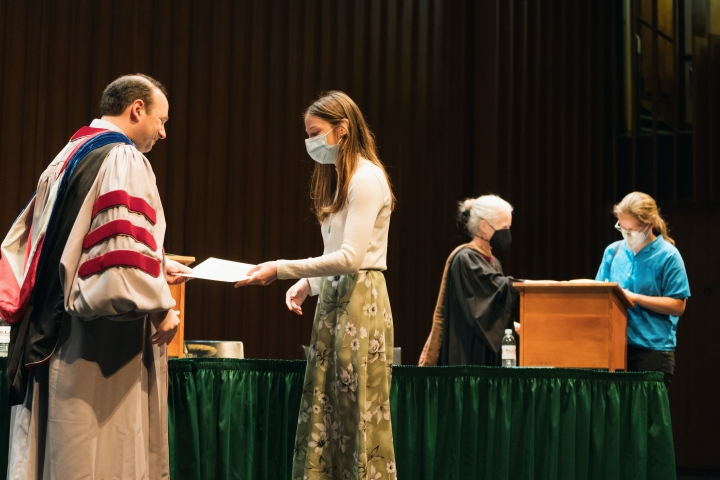 Kate Soule, chapter secretary and director of Arts & Sciences finance and research administration, was called upon to share the principles of Phi Beta Kappa. Soule went over the categories of membership and the criteria for election to the society before reminding new members that “in addition to scholarship, good moral character shall be a necessary qualification for membership.”

Chapter Vice President John Carey, associate dean of faculty for the social sciences and a professor of government, presented a summary of the society’s history, dating back to its founding at the College of William and Mary in Virginia in 1776. Its fourth chapter was founded at Dartmouth in 1787.

Before the initiation of new members, Samwick recognized the 22 members who were elected to membership at the autumn meeting in September 2021. The 121 new members were then invited to sign their names to the Phi Beta Kappa’s roster, receive their citations, and pledge to adhere to the principles of the nation’s oldest and most prestigious academic honor society.

In her address, Bezanilla reminded the students, that “pursuing your dreams doesn’t always mean that you have to follow a straight path.” She described how her career trajectory exemplified that dreams change, and said that’s OK. Bezanilla, who joked that she abandoned her childhood dreams of becoming an astronaut when she learned that physical fitness was paramount for that job, transitioned from an undergraduate degree in physics to a graduate degree and subsequently, a career, in cell biology.

“As you think about your futures and you embark on the next steps, do so with an open mind,” Bezanilla urged, “because you never know what might be around the next corner.”

The 121 new inductees from the Class of ’22 (unless otherwise indicated) include:

The following members of the 2022 class were inducted to the honor society in the fall of 2021: