The society inducted 97 graduating seniors and two honorary members at its June 8 meeting. 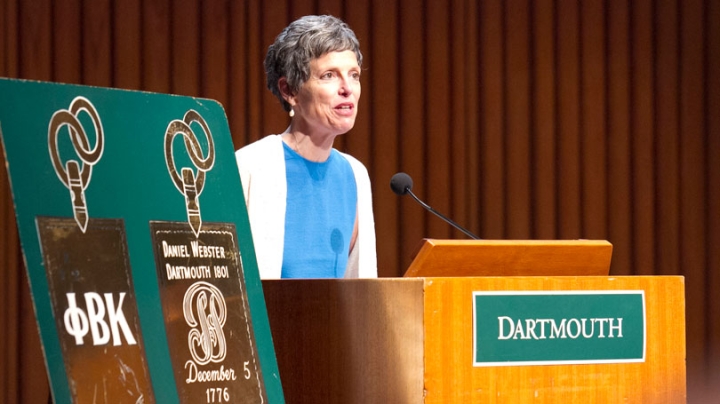 Barbara Will, the A. and R. Newbury Professor of English and associate dean for the faculty of arts and humanities, addresses new Phi Beta Kappa members. (Photo by Herb Swanson)
6/14/2019
Body

As marshal, Professor of Classical Studies Roberta Stewart led the procession of students into the auditorium.

Dennis Washburn, the Burlington Northern Foundation Professor in Asian Studies in Honor of Richard M. Bressler ’52, and associate dean of the faculty for interdisciplinary programs, welcomed the inductees and their families and friends.

“I now ask you, in words first employed in 1779, and therefore venerable in the usages of our society, to affirm that you will, with all your possible efforts, endeavor to prove true, just, and deeply attached to this, our growing society. And in addition to this ancient pledge, do you affirm that in all your relations you will adhere to the principles of the philosophy which its founders accepted as the inspiration of life, namely, fraternity, morality, and literature?”

“I do,” the inductees answered.

Susannah Heschel, the Eli Black Professor of Jewish Studies, chair of the Jewish Studies Program, and an honorary Phi Beta Kappa member, is the vice president of Dartmouth’s Phi Beta Kappa Chapter. She gave a brief history of the Alpha of New Hampshire chapter of the society, which, established at Dartmouth in 1787, is the fourth-oldest chapter in the country. Membership is based on academic merit. The June inductees, at the time of graduation, had an average standing no lower than the average of that achieved by graduates within the top tenth of those graduating in the preceding three academic years. 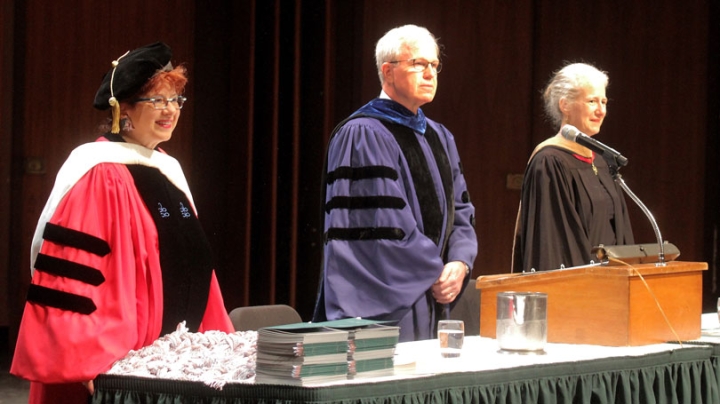 Susannah Heschel, the Eli Black Professor of Jewish Studies (left); Dennis Washburn, the Jane and Raphael Bernstein Professor in Asian Studies; and Kate Soule, chapter secretary and a member of the Phi Beta Kappa governing board, welcome the inductees. (Photo by Herb Swanson)

In addition to the undergraduates, Howard Weinberg ’62 was inducted as an alumni member and Barbara Will, the A. and R. Newbury Professor of English and associate dean for the faculty of arts and humanities, was inducted as an honorary member.

Weinberg, who teared up while recalling how his father saved up money for his tuition, said that majoring in government at Dartmouth laid the foundation for his work in television journalism. Weinberg was the founding producer of The Robert MacNeil Report on PBS and a producer for CBS News Sunday Morning and 60 Minutes. His current project is Nam June Paik & TV Lab: License to Create, which chronicles television’s first digital revolution.

Will congratulated the graduating inductees for embodying the Phi Beta Kappa motto: “The love of learning is the guide of life.”

“It has meant committing yourself to learning in the face of myriad other attractions and distractions—in the face of envy, perhaps disillusion, even in the face sometimes of the dismissiveness of your peers,” she said. “Because simply studying hard without a love of learning will not have gotten you to the place you are today. You’ve worked hard to be here, but you’ve also done much more than this. You’ve infused this work with love, with profound interest and attention, and in so doing, your love of learning has blossomed and flowered.”

In closing, Will urged the students to continue “to devote yourselves to learning in an open-ended and capacious way—learning for its own sake, learning as embodied in the ideal of Dartmouth’s liberal arts education.”

And she asked that they share their love of learning with others, “especially those who have not been as fortunate as you.”

Kate Soule, chapter secretary and a member of the Phi Beta Kappa governing board, encouraged the new members to become active in Phi Beta Kappa activities as they start their postgraduate lives. She also taught them the secret handshake.

At an earlier meeting on Oct. 18, 21 members of the Class of 2019 were inducted into Phi Beta Kappa.

The Phi Beta Kappa members inducted at Dartmouth during 2018-19 are: