Professor Tor Wager and the Neurophysiology of Pain

The newest member of the academic clusters studies connections between mind and body. 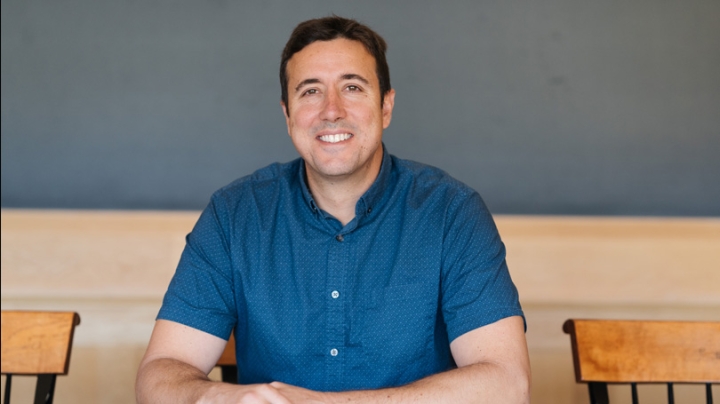 Professor Tor Wager is the latest scholar hired to the academic clusters, an initiative launched by President Philip J. Hanlon ’77 in 2014 to extend Dartmouth’s impact in the world. (Photo by Eli Burakian ’00)
10/29/2019
Body

What’s the relationship between emotion, pain, and the brain? Tor Wager, the inaugural Diana L. Taylor 1977 Distinguished Professor of Neuroscience, wants to find out.

“The brain controls the autonomic nervous system, the endocrine system, and, indirectly, the immune system. We know that how we think impacts our brain, and that these brain processes impact how our body responds to situations over time,” says Wager, who leads the Breaking the Neural Code academic cluster. “I study the effects of thoughts and beliefs and expectations on the brain, the body, and health.”

Wager is the latest scholar hired in the academic clusters, an initiative launched by President Philip J. Hanlon ’77 in 2014 to extend Dartmouth’s impact in the world through the creation of 10 interdisciplinary faculty teams that are collaborating at the leading edge of discovery. To date, more than a dozen scholars out of a total of 30 have joined the Dartmouth community as cluster faculty. Wager is the first to join the neuroscience cluster, Breaking the Neural Code, which seeks to advance the neurological equivalent of decoding the human genome.

“Professor Wager’s career has been built around an implicit understanding that key questions of how the brain and body interact can’t be answered in isolation—they cut across the fields of neuroscience, psychology, medicine, computational science, engineering, and the humanities,” says Provost Joseph Helble. “He is a tremendously collaborative and creative thinker and a prolific scholar who is already building networks across campus that have the potential to change how we think about the relationship between emotion and health.”

“Until recently, the primary way to study emotion or pain has been to ask people how they feel, which is a limitation that has a deep impact on how we can study these processes scientifically,” Wager says.

This limitation has large implications for the treatment of ailments such as chronic pain, which affects 20 percent of people in the United States, Wager says. “If we don’t have any way of measuring pain except for asking people how they feel, our treatments are often guided by self-reports instead of by an understanding of the physiology. So the goal is to build models of how the brain constructs these experiences, and how these brain processes interact with the body to impact our health and our well-being.”

The connection between mind and body in healing is more complicated than what many people may think of as the power of positive thinking. “A lot of people in chronic pain start off by being a superwoman or superman, like, ‘I’m just going to push this down because I’m tough.’ There’s a stigma about being in pain, but adopting an ‘ignore-and-avoid’ approach often makes things worse,” he says.

Wager’s research is showing that a more productive form of positive thinking may be for patients learn to “approach pain with a sense of exploration and acceptance, and a realization that pain doesn’t mean injury,” he says. “Maladaptive brain processes can create pain, and knowing that can make a huge difference for people.”

The author of more than 200 peer-reviewed articles and the principal or co-investigator on eight funded grants, including four sponsored by the National Institutes of Health, Wager joins the Department of Psychological and Brain Sciences from the University of Colorado, Boulder, where he was a member of the faculty for 15 years. Before that, he was an associate professor of psychology and neuroscience at Columbia University.

He earned a PhD in cognitive science and cognitive neuroscience at the University of Michigan, Ann Arbor, and completed his undergraduate degree at Principia College in Elsa, Ill., where he majored in music composition.

“I had a terrible ear, so I wasn’t very good—I was going to work really hard at music to be mediocre,” he says. “But I learned that there’s a process of making decisions and of trying to come up with a vision for what you want to create that’s not trivial. You want it to be interesting intellectually, but you also want it to sound like music—you want to love it. That’s always what I was going for. The phrase that comes to mind is ‘the rhythm of head and heart.’ It’s something I aspire to, even in my research now. It still informs what I choose to work on and how.”

Wager is married to Claudia Jakubzick, an associate professor of microbiology and immunology at the Geisel School of Medicine. Of joining the Dartmouth community, Wager says, “My family and I are super excited to be here. People have been helpful and supportive.”

He was drawn to Dartmouth in part because of its reputation for undergraduate teaching. “I’ve started meeting students, and I’ve found them to be very engaged and curious, so that’s exciting.”

He is in the process of recruiting undergraduates and graduate students to work in his lab, and will teach an undergraduate course on brain-imaging methods in the winter term. He plans to develop a new course on beliefs—“what they are, what their impacts are, how they form, how they can be resistant to outside information, how they spread across social networks,” he says.

About the Academic Cluster Initiative

The 10 academic clusters are being funded by an anonymous gift of $100 million that the College received in 2014—half of which was allocated to match an additional $100 million in philanthropy for the initiative. Another gift from an anonymous donor is funding professorships. As with the neuroscience cluster, the clusters are each organized around themes.