Celebration of Women Volunteer Leaders Focuses on the Future

Historic gift of $5 million invites 1,000 alumnae to participate in a “collective act of gratitude.” 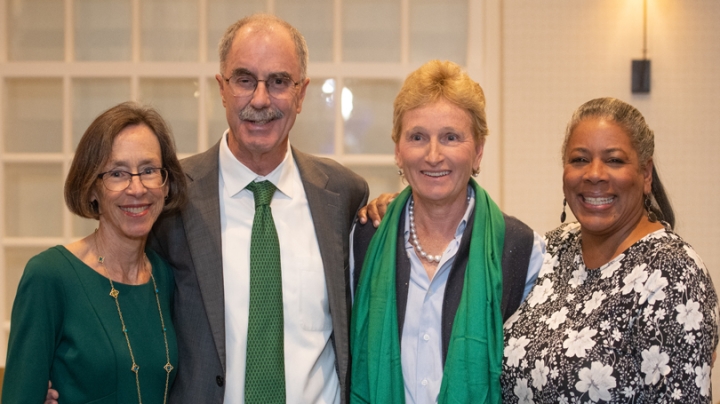 From left, Gail Gentes, President Philip J. Hanlon ’77, Denise Dupré ’80, and Laurel Richie ’81, chair of the Dartmouth Board of Trustees, this past weekend at the Woman’s Leadership Summit in Hanover. (Photo by Jeff Woodward)
11/03/2019
Body

Dartmouth alumnae leaders from across the country gathered in Hanover over the weekend to reflect on a string of remarkable achievements that have expanded their impact on Dartmouth and beyond—and to chart their course for growing a global, intergenerational community that is benefiting current students.

Dartmouth’s alumnae engagement programming is often cited as a national model in higher education. As institutional leaders, volunteers, and donors, Dartmouth alumnae are trailblazers within the Ivy League and across the entire universe of U.S. higher education.

One of the summit’s highlights was the announcement of a $5 million commitment toward the renovation of Dartmouth Hall, a fundraising priority championed by alumnae who are dedicated to seeing this iconic centerpiece of the liberal arts campus rejuvenated for future generations of students and faculty.

Denise Dupré ’80, a former trustee, pledged $5 million to the renovation project once 1,000 alumnae have made a gift of any size toward Dartmouth Hall.

“Just as Dartmouth Hall was built brick by brick, this is an invitation for us all to come together,” said Dupré. “I hope this initiative builds community across generations of Dartmouth alumnae, and that our work collectively creates an inspired learning space for today’s students.”

Alumnae who want to participate in the challenge must make a gift by March 8, International Women’s Day, to qualify for the gift from Dupré. To date, approximately 220 women have given to the renovation project, raising $17.7 million toward the $25 million goal. All women who support the project, with a gift of any size, will be acknowledged on a wall of appreciation in the renovated building.

As well as being the home of several humanities programs, Dartmouth Hall is a physical embodiment of the power of philanthropy. When fire destroyed the original Dartmouth Hall in 1904, donors provided all of the funding to rebuild the landmark structure.

President Philip J. Hanlon ’77 said Dupré’s challenge to her fellow alumnae is the latest example of her dedication to Dartmouth.

“As a trustee, Denise was a consensus builder,” said President Hanlon. “She is a champion of community and all that inspires us to embrace Dartmouth’s distinctive and extraordinary qualities. Her historic challenge gift links our heritage with the educational needs of the coming decades, and it will benefit the entire Dartmouth community for generations.”

Education is at the heart of Dupré’s philanthropic efforts and volunteer service. In addition to her eight years on the Dartmouth Board of Trustees, she has served on the boards of Teach for All, the Fessenden School, Noble and Greenough School, and Mercersburg Academy. Dupré has taught at Harvard University and is a former dean and professor at the Boston University School of Hotel Administration. She is currently managing partner of Champagne Hospitality.

At the Vanguard of Women’s Philanthropy

The Women’s Summit Weekend celebrated alumnae’s growing influence within the College community. Women represent approximately one-third of Dartmouth’s alumni population—the College started admitting female undergraduates in 1972—but account for more than 40 percent of the institution’s volunteer leadership. In 2018, for the first time ever, the chair of the Board of Trustees, president of the Alumni Council, and chair of the Dartmouth College Fund Committee were all women.

During the past five years, Dartmouth alumnae have established a national standard for philanthropic engagement in higher education. When three alumnae banded together in 2014 to create the Centennial Circle of Dartmouth Alumnae, their goal was to recruit 100 women to each commit at least $100,000 for financial aid—an unprecedented effort to expand the impact of women giving to Dartmouth. On Saturday evening, Board of Trustees Chair Laurel Richie ’81 announced that the Centennial Circle had welcomed its 250th member.

“We have placed Dartmouth at the vanguard of women’s philanthropy,” Richie declared to the 150 Women’s Leadership Summit participants. “Who benefits from this? Every student who can now enjoy a Dartmouth education through expanded scholarship resources and the knowledge that you care enough to see them through.”

Richie noted continued progress toward another goal related to The Call to Lead campaign: to inspire 100 women to commit at least $1 million each by the close of the campaign in 2022. Through the weekend, 76 women had made commitments of this size.

A Weekend to Exchange Ideas and Plan Future Achievements

The Women’s Leadership Summit provided opportunities for women to engage in educational, social, and networking programs and to hear from distinguished faculty, alumni, and guest experts. The event was one of a series of alumni gatherings held to foster community and discuss leadership in the course of Dartmouth’s 250th anniversary year.

“The kinship Dartmouth women share is vital, and the Women’s Leadership Summit was a wonderful start in our journey toward all alumnae connecting, enriching, and inspiring each other and the College,” said Meg Sommerfeld ’90, global chair of Women of Dartmouth, an alumnae organization open to all women who attended Dartmouth. “We heard powerful stories from many Dartmouth women this weekend. The leadership of Women of Dartmouth is grateful to have been part of the summit, and we look forward to our continued collaboration and more opportunities for women to share our experiences, ideas, and perspectives.”

Ward said she was particularly impressed by how professional school alumnae were so warmly welcomed.

“Each day, I witnessed and experienced myriad connections between Dartmouth, Tuck, Thayer, and Geisel graduates, in the spirit of One Dartmouth,” she said. “Trustees, faculty, and administrators shared in the classes, lectures, conversations, and activities, and together we all became one—One Dartmouth. It felt truly uniting and inspiring to be a part of this special event.”

On Sunday, summit attendees volunteered for WISE, a nonprofit agency in the Upper Valley that supports the victims of sexual violence. Their volunteerism counted toward The Call to Serve—Dartmouth’s year-long push for alumni, students, parents, faculty, and staff to volunteer 250,000 hours of service to others, as part of the College’s 250th anniversary. Through the weekend, members of the Dartmouth community had given more than 244,900 hours of service in 2019.