Vox Populi: The Gift and Continuing Work of Student-Veterans

President Emeritus James Wright: “You enrich the campuses and the classrooms where you study.” 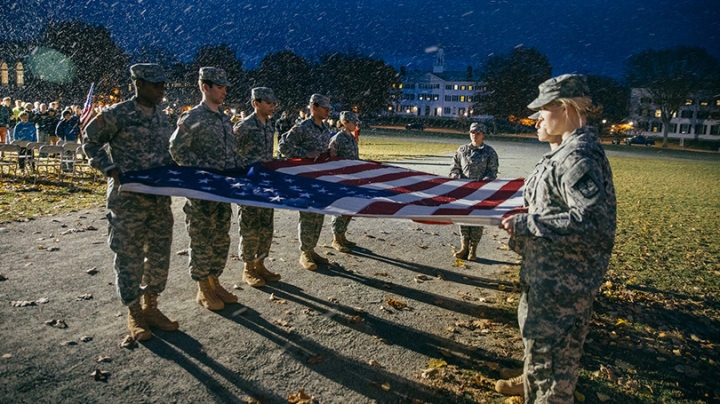 James Wright is president emeritus of Dartmouth. Among his books are “Enduring Vietnam: An American Generation and Its War” (2017) and “Those Who Have Borne the Battle: A History of America’s Wars and Those Who Fought Them” (2012).

The following is an edited version of his remarks at the Ivy League Veterans Council fall meeting, which took place Oct. 5 at Dartmouth.

We are proud of the role that Dartmouth has played in recruiting and graduating veterans in this century—and, indeed, in the 20th century, as well.

And one of the great unsung accomplishments is the commitment of the Tuck School of Business. Among the smallest of the leading business schools, Tuck has graduated 200 post 9/11 veterans, and 30 are currently enrolled out of a student body of 570.

The first contingent of post 9/11 undergraduate veterans came here in 2007. They were all Marines, and nearly all came by way of the Bethesda Naval Hospital. We have since graduated 38 veterans, and 33 are currently enrolled at the undergraduate College.

I recall attending an American Council on Education meeting in San Diego in 2008 where they had a panel on the issue of recruiting veterans to our schools. Major Gen. Mike Lehnert, the commanding general at Camp Pendleton, was there, and he said the California state system and Dartmouth were the most veteran-friendly schools.

That was very flattering. And it may even have been accurate at the time—but if so, that said more about other schools than it did about our efforts. Quite frankly, in those early years very few of the schools represented here were actively recruiting veterans.

Now this organization and your engagement affirm that the other schools have joined in and sometimes exceeded Dartmouth’s efforts. Well done. Except well done does not mean job over. Far from it. We all can do more.

Your generation faces a different economic and occupational world from that of your parents and grandparents. Veterans could come home from Vietnam—as they had from Korea and WW II—and look to get a job at a local factory or mill. They could assume that if they did their job, if they worked hard, they would have job security with health benefits until they retired.  And then probably have a retirement package to supplement social security.

It would not be wise to make such an assumption today. A degree, undergraduate and sometimes advanced, is now often a requisite for a good job or for entry into the professions. And job security is not a lifetime guarantee.

After we secured the post 9/11 GI Bill in 2008, I realized that, including the Yellow Ribbon program, we had addressed one of the major financial obstacles to veterans pursuing their education. I am not saying that the support was adequate in all cases. It was not. And I am surely not claiming that all schools recognized the special financial needs of veterans. You do not fit into the conventional models for dependent high school graduates entering college.

But with the 2008 legislation, the basic financial aid system was in place, to be enhanced and extended over the next decade. Schools, often far too slowly, came to recognize their opportunity and their obligations. The major challenge then was to encourage veterans to take advantage of these opportunities and to navigate the admissions system—including at the very best schools. And for all educational institutions to open their doors and resources to veterans to make that successful.

Your generation of veterans is not a cross section of American society. You tend to be from more rural or small-town backgrounds, more from the South, the Midwest, the mountain West. Many of you come from families where military service was a tradition; veterans today tend to be from blue collar or middle-class backgrounds.

Many who have served likely attended high schools where it was not assumed that all graduates would go to college. Veterans tended not to have been enrolled in college prep programs—and in fact many did not even take the standardized ACT or SAT examinations. So even if the basic financial support system was in place, a more fundamental challenge remained: to encourage, enable, and empower veterans—to assure them that, yes, they could do this. And they could do it at any of the elite schools in the country.

I think convincing veterans of their academic potential is an obligation that institutions of higher learning and counselors share—and we need to work harder to do this. It requires active recruiting. We need to encourage our admissions offices to be more focused and imaginative in recruiting and encouraging veterans.

Once enrolled, it requires us to recognize the differences in age and background and needs of veteran students. It has been my experience that veterans are far less likely than their classmates to complain or demand an adjustment in procedures.

Let me make a final, critical point: Recruiting and encouraging and enabling veterans to pursue their educations is not some sort of condescending “thank you for your service” gratuity. The GI Bill may provide an incentive to serve, but it is not a gift. It is a fully earned benefit for those who have served the country, one that aids them in their transition back to civilian life.

But there is more. Let’s be clear. We—our schools and this republic—are the real beneficiaries of your enrollment. You enrich the campuses and the classrooms where you study and the organizations you join. Our schools and your nonveteran classmates are enriched intellectually by your presence. You are role models. And there is more. You are not finished serving this country.

A few years ago I wrote an op-ed pointing out that if today’s military volunteers do not represent the nation demographically, they do not represent it attitudinally, either.  In recent years there has been an unfortunate and marked decline in this nation in the shared sense of civic engagement—and of civic responsibility. Our national discourse has often been reduced to a contest of individuals or groups pursuing their self-interests and maligning and dismissing the needs and interests of others. Ideology and partisanship have come to represent and to channel these goals. Political figures promise and do not ask for sacrifice—except for the young they send to war.

You who volunteered to serve stand for something different. There was no draft conscripting you. You still understand John Kennedy’s plea to ask not what the country can do for you, but what you can do for the country. Sen. John McCain described this as fighting for a cause larger than yourself.

You know how to serve as a team member. You have worked effectively with others of different backgrounds, followed orders and also assumed personal responsibility and accountability, functioned in complex organizations in an advanced technological environment, and confronted dangerous situations in environments of total mutual dependence. You have learned discipline and restraint and self-confidence—and tolerance. You have represented this nation in undertakings that emphasize respecting those of different cultures. You have observed and offered service and sacrifice for a greater good.

So your education is not only an investment in your future. It is a necessary investment in the future of this Republic. Your tours of duty are not over. Your colleges and universities are beneficiaries who need to shout out with pride the value of your contributions to their institutions and remind everyone of the promise you offer to the world. You have already made a down payment on that promise.

I am delighted to be here with you and to join in applauding as you take the next step in this process. Thank you for continuing to serve.

Got something to say? Members of the Dartmouth community are invited to submit essays for possible publication on Dartmouth News. Email essays to: dartmouth.news@dartmouth.edu.