Admissions dean: “The quality and range of this year’s pool was really impressive.” 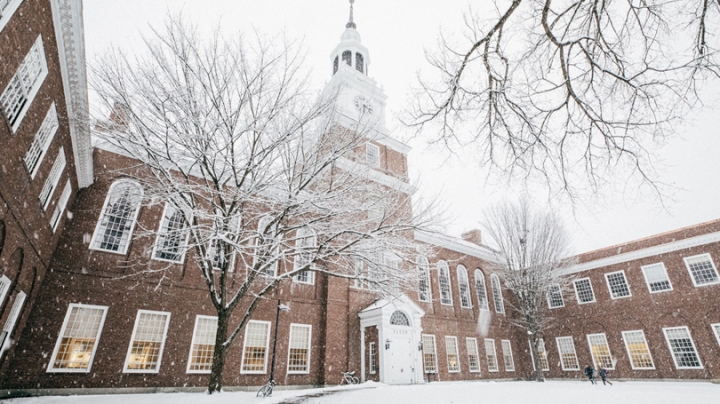 Dartmouth has offered admission to the first members of the Class of 2024, as 526 early decision applicants and an additional 21 applicants through the Quest Bridge National Match Program were notified of their acceptance on Dec. 12.

“The quality and range of this year’s pool was really impressive,” says Lee Coffin, vice provost for enrollment and dean of admissions and financial aid.

The 547 acceptances—which Coffin expects will make up 46% of the next entering class after enrollments and gap years are processed—represent the most academically accomplished as well as the most geographically, racially, and socioeconomically diverse early decision group in Dartmouth’s history.

“As we experienced last year, the demographics of the early round continue to expand as more financial aid candidates embrace the early option,” Coffin says.

He credits the increased socioeconomic diversity in the early pool to the ability to assess financial need using parental tax returns and the accuracy and ease of the MyinTuition net price calculator, located on Dartmouth’s undergraduate financial aid website. “There is much less uncertainty about aid eligibility for families,” Coffin says, adding that 55% of early acceptances are candidates for need-based financial aid.

Dartmouth expects to award $11.25 million in scholarship aid to accepted early decision students, with the average grant amounting to $55,900. Both are new records, as is the 14 percent of accepted students eligible for federal Pell grants, which are offered to students from the lowest socioeconomic quartile. In addition, 33 foreign students have been offered need-based scholarships.

“This level of scholarship in the early round is phenomenal,” says Dino Koff, director of financial aid.

The accepted students come from 47 U.S. states, the District of Columbia, and 28 other countries, with California and China the most represented in the U.S. and international cohorts, respectively. The group also includes record percentages of public high school students (54%), first-generation students (15%), foreign citizens (12%), and students of color (35%). The children of Dartmouth alumni represent 15% of the accepted students and recruited athletes make up 25% of the group.

“This is easily the most global early cohort in Dartmouth’s 250-year history,” Coffin says. “It’s very exciting to witness the evolution of Dartmouth’s visibility among high-achieving students from around the world.”

The group’s key academic indicators are all in record territory, either matching or exceeding prior records, with more than 20% of the early decision students expected to graduate as valedictorian or salutatorian of their class, and 95% of those students reporting class rank among the top 10% of their senior class. The mean SAT score is 1481 and ACT composite is 33.

The deadline for regular decision admission is Jan. 2. Dartmouth expects to enroll 1,150 students in the Class of 2024.