The geography major plans to pursue a career in the U.S. Foreign Service. 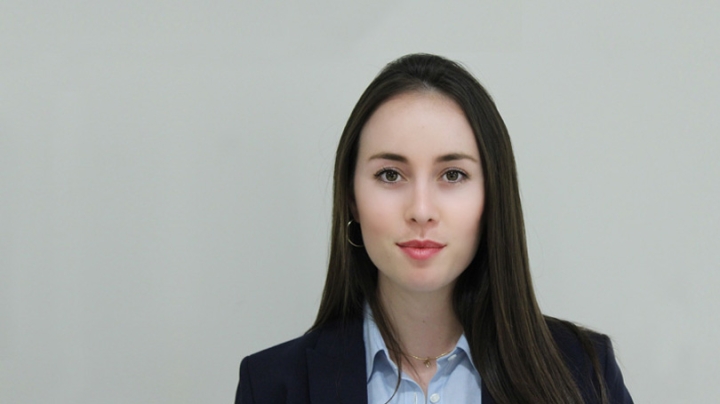 The fellowship will bring Kamen—a student of geography and global health and the past recipient of a Truman Scholarship and a David L. Boren Scholarship, among other honors—back to her hometown of Washington, D.C., to begin a two-year master’s program in public policy, concentrating on humanitarian action, human security, and sub-Saharan Africa. During that time, Kamen will complete two internships with the state department, one in Washington and the other overseas. At the end of the program, she will be qualified as a foreign service officer.

“Sydney Kamen exemplifies the spirit of global citizenship that Dartmouth strives to support. Congratulations to Sydney on this recognition of her commitment to diplomacy, human rights, and public service,” says Provost Joseph Helble.

Of receiving the fellowship, Kamen, who is currently in Kosovo conducting public health research with the Municipality of Pristina, says, “I feel truly and deeply honored. It is an immense privilege to be extended a commission to serve the United States and work alongside dedicated diplomats to promote peace and prosperity around the world, now more than ever.”

Kamen, who has been both a varsity rower and an Army ROTC cadet, describes herself as “an enthusiastic student of the world.” Among her many activities at Dartmouth, she has been a War and Peace Fellow through the John Sloan Dickey Center for International Understanding, a Great Issues Scholar, a campus Peace Corps ambassador, and a student director for public relations and community engagement at the Center for Social Impact.

“Dartmouth has provided me with the academic rigor, resources, access, and faculty mentorship to explore and prepare for a career in public service,” Kamen says.

The founder of the international nonprofit So Others Are Protected (SOAP), which promotes hygiene and sanitation for women and girls in vulnerable communities, Kamen spent the past year and a half as a Boren Scholar of Swahili in Tanzania, where she worked as a research assistant in a field hospital and interned with the state department and U.S. Agency for International Development. Through a Davis Projects for Peace Grant, she designed and implemented a comprehensive health-based approach to peace-building in Rwanda. She was also named a 2019 Salaam Fellow in Morocco, participated in Project Preservation in Poland, and has studied and worked in the Middle East and India.

Melody Burkins, the associate director of the Dickey Center, calls Kamen “an exceptional young scholar with an enthusiasm for global engagement matched only by her dedication to foreign service and her hopes to help make the world a safer, kinder, and more equitable place.”

“She is also a natural leader, with a deep confidence in her skills I have watched develop here at Dartmouth,” Burkins says. “I can’t wait to hear all that she will do as a Pickering Fellow.”

“My academic research and global health work have been oriented around the common good and have placed a strong emphasis on sustainability and ethics, all of which overlap with the fundamentals of diplomatic work,” Kamen says.

“I want to one day be a part of the initiatives that make and direct good, solid policy decisions from a place of knowledge and understanding, specifically at the confluence of humanitarianism, security, human rights, and health. I also want to be a part of preventing future conflict and war.”