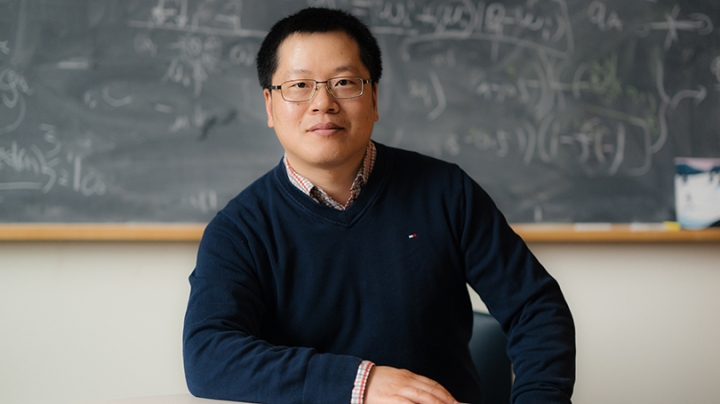 At the root of Assistant Professor Feng Fu’s work is the mathematics of altruism.

“My PhD examined how to promote cooperation in the most general sense, using very theoretical mathematical models to look at how to prompt people to be kind to each other,” he says.

Fu, who is fluent in Mandarin Chinese and English, and has some German, earned his PhD from Peking University while doing his dissertation research at Harvard. After receiving his doctorate, he continued at Harvard as a postdoc and then as a research fellow at Harvard Medical School. He then became a senior postdoctoral researcher at ETH Zurich, a science, technology, engineering and mathematics university in Zurich, Switzerland. He left ETH Zurich in 2015 to join the Dartmouth faculty.

Fu says he was interested in math from his early years growing up in China’s Jiangsu Province, and he began his university studies at Fudan University in Shanghai with the intention of studying fluid dynamics. Then, during his doctoral work, his focus shifted.

“I became more and more interested in looking at complex systems. Complex systems studies is a multidisciplinary approach to real-world problems using a systems view. This is what we call ‘applied math,’ ” Fu says. “Humans, animals, ecological communities—all can be viewed as systems. All the entities of the system interact together and form some sort of collective dynamics. So, in my current work, I have focused on some human behavior—our social and prosocial behaviors like cooperation and other group dynamics.”

The interdisciplinary approach integrates the social sciences, psychology, computer science, physics, and data science, he says. This broad understanding is reflected in his teaching. In addition to math classes, Fu teaches evolutionary game theory for the program in quantitative social science (QSS), and he is an adjunct assistant professor of biomedical data science at the Geisel School of Medicine.

In addition, since coming to Dartmouth Fu has worked intensively with undergraduates on research projects and co-authored papers published in peer-reviewed journals. Examples including a study with Tucker Evans ’19 on the emergence of partisan echo chambers published in the Royal Society Open Science, and a paper on the effects of social contagions in opinion formation co-authored by Herbert Chang ’18 in the New Journal of Physics.

A snapshots of networks of cooperation in the U.S. House of Representatives from 1949 to 2009 generated for a paper titled “Opinion formation on dynamic networks: identifying conditions for the emergence of partisan echo chambers,” co-authored by Tucker Evans ’18.

“The research we do has a focus on understanding multifaceted human behavior, ranging from public health cooperation, political polarization, and diversity—the ‘us versus them’ outgroup hatred that presents as ethnic, racial, and cultural hostility,” Fu says. “We try to understand what regulates these behaviors—what kind of factors influence this behavior, and how we can mitigate these issues by modeling combined with data.”

Lately, Fu has been studying individual and collective belief shifts related to public health promotion of vaccines. Vaccines are the most cost-effective means to prevent and control infectious disease, and the development of “herd immunity” as a result of public health vaccination programs—as in the case of the sharp decline of childhood measles cases—benefits both individuals and society, Fu explains.

But once a disease is greatly reduced, the perceived value for the vaccine declines, and the perceived costs, such as inconvenience or feared side-effects, increases. Consequently, the level of vaccination falls, Fu says, and this can cause the collapse of the herd immunity effect. An increase of anti-vaccine sentiment led to a 10-fold increase in cases of measles between 2016 and 2019, for example.

“Fundamentally, most humans are risk averse,” Fu says. “They don’t see a need to be vaccinated because vaccine is something you pay for up front for something that will happen in the future, or maybe we should say for something that likely won’t happen in the future. We don’t know what we’re getting. People normally just think about themselves; they don’t think that, if everybody is acting as they act, we end up with nobody thinking about the public good.”

Fu’s work looks at the effects of “social contagion” on vaccine acceptance. Although the term contagion sounds negative rather than positive, it can be either. It refers to the effect of influencers within social networks. Fu is developing algorithms to examine ways to target influencers to act as social contagions to promote vaccine use by the broader community.

“This kind of public good thinking is so important for public health. Essentially it is a public good. If we don’t maintain and properly uphold such public good, society cannot escape the ‘tragedy of the commons,’ because we always have social antagonisms. Eventually we will all be affected by such lack of public good, whether it manifests as in-group, out-group hatred, the spread of infectious diseases, or a decrease in the effectiveness of antibiotics.”

The internet and social media have amplified these problems, Fu says. Social media companies use algorithms to amplify and intensify individuals’ consumption behavior and beliefs with the goal of maximizing the amount of time and the number of clicks for each user. The motivation is not social good, but profit, he says.

“That’s why people are starting to talk about the ethics of algorithms. While the ethical standards of these commercial enterprises and corporations are being debated, the social media addiction and polarizations they have caused are real,” Fu says. “We try to study mathematical models of morality. To do this, eventually we need to use social norms, and this goes back to the social sciences. It is the idea of cultural evolution—basically, how we promote altruism and the greater good. Because behavior is guided by deep moral considerations, but sometimes we just forget this.”

He envisions a new field of study that merges the disciplines of math, social science, psychology, data science, ethics, and others into a discipline he calls “mathematical humanities.”

“We study real-world problems because we’re human,” he says. “If we really want to make an impact on the world we live in, if we are really trying to make the world a better place, then fundamentally, this becomes a morality problem, an ethics problem.”