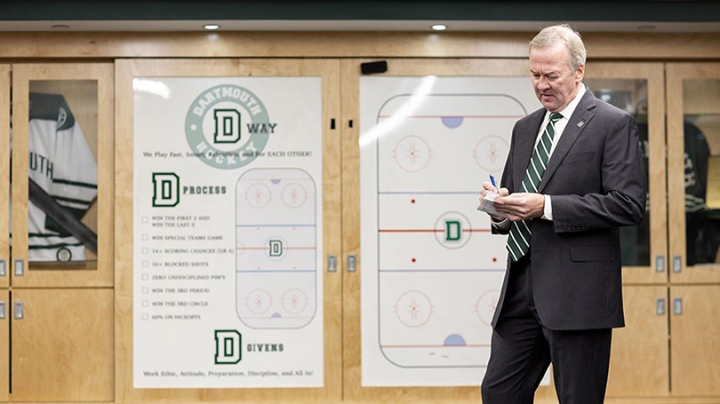 Read the full story by Pat Salvas, published by the Dartmouth Athletics.

The all-time leader in both wins (331) and games coached (752), Gaudet has been the face of the Big Green men’s hockey program since taking over at his alma mater prior to the start of the 1997-98 season, after nine years as the head coach at Brown.

“It has been an honor and privilege to serve in the Dartmouth Men’s Hockey program as a student-athlete, assistant coach, parent, head coach and a proud alumnus,” Gaudet said. “As a team, we always talk about leaving the jersey in a better place once you exit Thompson Arena, and I hope that I have successfully accomplished that mission.”

A member of the New Hampshire Legends of Hockey Hall of Fame Class of 2018, Gaudet became the winningest coach in the history of Dartmouth hockey with his 309th victory behind the bench on Nov. 30, 2018 against No. 16 Cornell, passing the legendary Eddie Jeremiah ’30, who had owned the record for more than a half century. The previous season, Gaudet won his 300th game at Dartmouth, joining Jeremiah as the only two coaches in program history to reach the milestone.

“Bobby was a passionate teacher and coach who always put the welfare of his student-athletes first,” Athletics Director Harry Sheehy said. “As a son of Dartmouth, his passion for Dartmouth Hockey was exceeded only by his love for the college. He leaves behind a powerful legacy forged through 23 years of impacting Dartmouth students.”