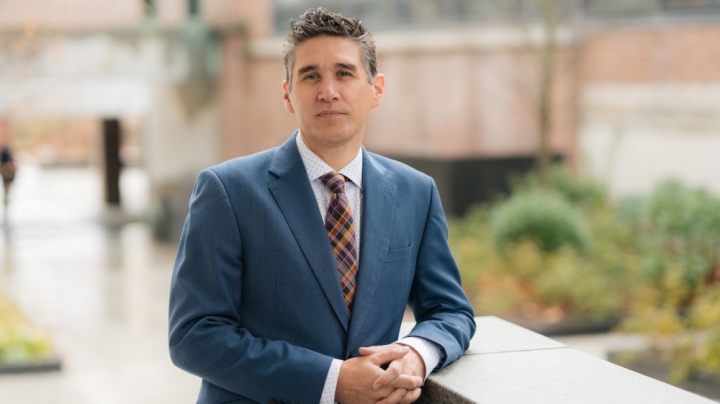 Associate Professor of Government Jason Lyall, the inaugural James Wright Chair in Transnational Studies, has been named an Andrew Carnegie Fellow in recognition of his research on improving humanitarian assistance in violent settings.

Lyall, the director of the Political Violence FieldLab at the John Sloan Dickey Center for International Understanding, is one of 27 scholars and writers chosen this year by the Carnegie Corporation of New York in support of significant research, writing, and publishing in the humanities and the social sciences.

“This is an enormous honor and I am so grateful to Dartmouth,” Lyall says. “After I joined the faculty in July, they came to me right away and said, ‘How can we help you, and by the way, have you heard about this opportunity?’ So they deserve the credit for getting me to the starting line.”

Provost Joseph Helble says Lyall’s selection as a Carnegie fellow acknowledges the high level of research and writing that he has achieved and recognizes the significance of the contributions he is likely to make in his field.

“Jason’s research into the relationship between inequality and violence, and his work assessing the effectiveness of aid programs in conflict settings, address some of the most important issues of our world today,” Helble says. “His work with undergraduates in the classroom and as director of the FieldLab reflects his commitment as a teacher and scholar, and as a mentor to students seeking to take on the world’s great challenges.”

Each Carnegie fellowship provides up to $200,000 to support work on a book or major study. Lyall plans to examine the political and economic effects of humanitarian aid in Iraq, Afghanistan, and Yemen, including whether these aid projects improve the lives of recipients and reduced violence in harmed communities.

Lyall says that, during this project, he will continue working remotely with his FieldLab students, who will gain hands-on experience by helping build the datasets, maps, and surveys needed to conduct this research. Student participation will not involve travel, Lyall added.

John Carey, the associate dean for the social sciences, says the recognition from Carnegie reflects the importance of Lyall’s research on understanding and mitigating political violence in the world’s most unstable regions.

“Most humanitarian aid goes to countries destabilized by political violence or civil war,” says Carey, the John Wentworth Professor in the Social Sciences. “We lack data—and even more, we lack reliable studies—on how this funding is affecting the situation, or if it is helping at all. Jason’s research has the potential to change the conversation about how to counter political violence, and his commitment to collaborating with students presents an invaluable opportunity for life-changing learning.”

In the government department, Lyall teaches courses on international security, civil wars, and research methods for working in areas of conflict, as well as the ethics of working in those areas. As the FieldLab’s director, he brings students interested in a range of disciplines, including data studies, geospatial mapping, public policy, and history, into a setting where they can address real-world geopolitical issues, he says.

He has received funding from AidData/U.S. Agency for International Development (USAID), the Air Force Office of Scientific Research, the MacArthur Foundation, and the U.S. Institute of Peace. He has conducted fieldwork in Russia and in Afghanistan, where he served as the technical adviser for USAID’s Measuring the Impact of Stabilization Initiatives project from 2012 through 2015.

The Carnegie Corporation received 322 nominations of scholars and writers whose work “applies fresh perspectives to some of the most pressing issues of our times, shows potential for meaningful impact on a field of study, and has the capacity for dissemination to a broad audience,” according to the organization’s website. Each nominee underwent a preliminary evaluation by experts in various fields. The top proposals were then forwarded to a jury of scholars for the selection of the 27 fellows.