Professor Matthew Delmont on the Significance of Juneteenth

“It remains at its roots a celebration of freedom,” says the Dartmouth historian. 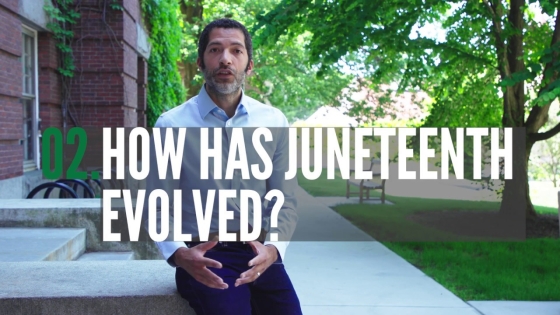 In the wake of recent protests for racial justice, there’s been an increased focus on Juneteenth—a day celebrating the end of slavery in the United States. To provide more context on the June 19 commemoration, Dartmouth News checked in with Sherman Fairchild Distinguished Professor of History Matthew Delmont, who says it “speaks to the larger moment that we’re in right now.”

For Juneteenth this year, the Geisel School of Medicine is inviting the Dartmouth community to a “Juneteenth Town Hall on Racism and Structural Violence” beginning at 5 p.m. on Friday. The town hall is billed as an opportunity to “learn, reflect, and honor the lives lost to anti-Black racism.” A Dartmouth NetID is required to access the event.

The Zoom-based webinar, hosted by Geisel’s Office of Diversity, Inclusion, and Community Engagement and the dean’s office, will feature keynote speaker Camara Jones, a doctor of family medicine and epidemiology, a fellow at the Radcliffe Institute for Advanced Study at Harvard, and author of landmark articles on critical race theory; and a presentation by Judy Gomez, an assistant professor of psychology at Connecticut College and a specialist in racial trauma.

What is Juneteenth and why is it significant in U.S. history?

Juneteenth is a celebration of freedom from slavery. President Lincoln signed the Emancipation Proclamation in 1863, but word of that didn’t reach Texas until 1865. The word Juneteenth comes from June 19, 1865—the moment that the last group of African Americans who were enslaved learned about their freedom. It became a major celebration in Texas from that point on. It’s called Juneteenth in Texas, but there are Emancipation Day celebrations all across the country and actually all across the African Diaspora. Juneteenth as a celebration became even more popular nationally in the 1960s during the Civil Rights era, and that’s where you start to see different parts of the country outside of Texas start to celebrate Juneteenth as Juneteenth. But it remains at its roots a celebration of freedom.

What does the gap between the signing of the Emancipation Proclamation and when the last enslaved people learned they were free say about the process of ending slavery?

The end of slavery always was a process. The Emancipation Proclamation frees people who were enslaved in the South, but that doesn’t have teeth until the Union wins the Civil War. Word of the Emancipation Proclamation is brought to Texas by the Union Army, and until the Union Army is actually there to enforce the Proclamation, freedom is really just a word on paper. So it is a fight that takes years to play out. One reason the celebration of Juneteenth is so important is that it encourages people to remember that freedom that was something that had to be continually fought for after the end of official slavery. For African Americans—through Reconstruction, the Jim Crow era, even in the modern era—freedom has never been guaranteed. And so it’s a celebration of what folks have overcome, but also a realization that that fight is ongoing.

How have some of the traditions around Juneteenth evolved?

Celebrations for Juneteenth have always been a mix of cookout-style celebrations and political advocacy. So you’d see people playing games, playing sports, cooking with family and friends, in very local celebrations. But you’d also always see political advocacy: people reciting famous speeches, reading famous poems, singing well-known African American songs—and into the more modern era, voter registration. These things are part of the legacy of Juneteenth from its earliest foundation. It goes back to the fighting spirit of the celebration.

Most states recognize Juneteenth as a state holiday. Why does official recognition matter?

Official recognition matters because holidays matter. Think about the Martin Luther King holiday and how that’s played such an important role in maintaining and celebrating African American history broadly—bringing it not just to African American people but getting all Americans to recognize the importance of someone like Martin Luther King. For Juneteenth, Texas first made it a state holiday in 1980, and the person who led that campaign, state legislator Al Edwards, then pushed for it across the country. It gives it a sense of permanence. Our country’s done a poor job of remembering the history of slavery, and so setting aside a day to think about Juneteenth, slavery, emancipation, and the fact that African Americans have been fighting for freedom since 1865, is deeply important. It encourages people to take time away from their normal daily routines and focus themselves, with their communities, to remember where people have been, but also to chart paths where they want to go in the future.

Do you have personal or family traditions that you celebrate around Juneteenth?

I actually didn’t learn about Juneteenth until I went to college. Ralph Ellison has a book that he didn’t ever fully finish called Juneteenth, and I think it was actually my junior year when I learned about it. But when I went back home to Minnesota, I learned that the local park where I used to play football had a Juneteenth cookout celebration. That was my first time celebrating it, in the early 2000s. Since then I’ve moved all around the country as an academic, but have tried to find the different local celebrations and take part in those.

Why is Juneteenth getting more recognition now?

Juneteenth is getting more recognition right now because it coincides with the massive outpouring of support for the Black Lives Matter movement—really the largest social movement we’ve seen in several generations. It’s a reminder that these battles have been going on for over a century. More broadly, people are gravitating toward Juneteenth as a way to recognize the importance of thinking seriously about African American history—thinking seriously about what was achieved with the Emancipation Proclamation and what wasn’t. It’s easy to look back at the era of slavery and say that ended in 1865 and the nation moved towards equality, but we all can very plainly see that full equality has not yet been achieved. So Juneteenth gives us a day to really focus on that and hopefully commit ourselves to achieving that equality soon. It speaks to the larger moment that we’re in right now, where as a nation people are trying to grapple with the unresolved legacies of slavery and the unresolved challenges of the Civil Rights era, and trying to educate themselves on these aspects of African American history.

For people new to the Juneteenth celebrations, can they participate?

For people who aren’t black, a way to celebrate Juneteenth is trying to learn more about African American history and about what’s going on right now with regards to Black Lives Matter. They can commit to doing work around voter registration, and try to educate themselves on the history of slavery and civil rights. There’s so much great material you can find online or at your library. And to spend time with a community—I think that part’s important. Spend time with your family or whomever you’re able to share this with. Spending time reading poems, reading speeches, doing voter registration work—all of that is working in the spirit of Juneteenth.