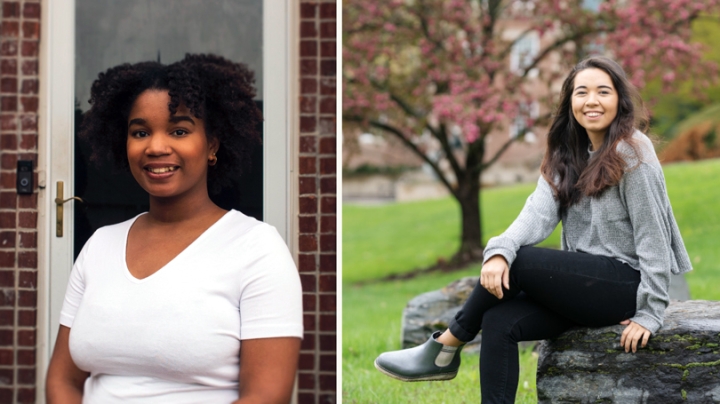 Jasmine Butler ’21, left, and Gabrial Canfield ’21 were named 2020 Udall Scholars, recognizing their leadership potential and their commitment to careers in the environment, Native health care, or tribal policy. (Photos by Eli Burakian and courtesy of Jasmine Butler ’21)
7/06/2020
Body

Jasmine Butler ’21 and Gabrial Canfield ’21 are among 55 Udall Scholars named this year, selected from among 429 candidates at nearly 200 universities nationwide based on their leadership potential, record of public service, and academic achievement, as well as their commitment to careers in the environment, Native health care, or tribal policy.

In addition, The Udall Foundation and Native Nations Institute for Leadership, Management, and Policy at the University of Arizona have selected Janae Harris ’21, Womsikuk James ’21, Alayah Johnson-Jennings ’21, and Caitlin E. Wanic ’21 as four of this year’s 12 Native American Congressional Interns—representing 12 tribes and nine universities around the country.

Because of COVID-19, the 2020 Udall internship program has been canceled, but the 2020 cohort has been offered spots in the 2021 program.

The Udall scholarship and internship programs honor “the legacies of Morris Udall and Stewart Udall, whose careers had a significant impact on Native American self-governance, health care, and the stewardship of public lands and natural resources,” according to the Udall Foundation website. Both Udalls were congressmen from Arizona; Stewart Udall served as U.S. secretary of the interior during the Kennedy administration.

To learn more about how to apply for the Udall and other programs, visit Dartmouth’s Fellowship Advising Office.

“Receiving the Udall offers a strong sense of validation that my commitment to equitable and just recovery for minority communities in the South after natural disasters is important, appreciated, and urgent,” says Jasmine Butler, a Mellon Mays Fellow who says her interest in the disparate impacts of natural disasters on marginalized communities grew out of an early love for the summer thunderstorms that lulled her to sleep as a child in Memphis.

“As I grew older and paid more attention to the news, I realized that these thunderstorms were often the outer remnants of much more devastating storms and tornados happening farther away,” she says.

She came to Dartmouth planning a biology major, but found in the geography department encouragement to combine her scientific interests with the study of human beings. “The geography department was the first place where I felt affirmed in my desire to study something as specific as the experiences of southern Black people during natural disasters,” she says.

She is currently conducting research with Abigail Neely and Patricia Lopez, both assistant professors of geography. “They both constantly push me to think more critically and to be reflective about why I study the things that I do,” she says.

Gabrial Canfield, an Alaska Native who also received a Udall Scholarship last year, says she’s “honored to receive the Udall Scholarship the second year in a row. For me personally, it means that I am on the right track with my work in Alaska and the Arctic.”

In the past year, Canfield continued her studies in Arctic policy. Through the John Sloan Dickey Center for International Understanding, she attended a Model Arctic Council in Iceland, and last fall she interned with the Southeast Alaska Conservation Council in Juneau, Alaska—an organization that works with tribes, local communities, and governments to protect wilderness and Indigenous rights in southeast Alaska. That experience “introduced me to new ways of learning and understanding local grassroots organizing and the grueling, time-consuming work that it takes,” she says.

Among the benefits Udall offers is an annual orientation program that lets scholars network with each other and program alumni. “I appreciated the scholar orientation and the network that it creates immensely—it was the most important part of being a Udall Scholar,” she says. “It has opened up my eyes to opportunities, built my confidence in being an activist, and solidified my dedication to the field of tribal public policy.”

A member of the Northern Arapaho Tribe of the Wind River Reservation—the first of her tribe to be selected for a Udall internship—Janae Harris is interested in health policy and improving the health of Indigenous communities.

She calls the Udall internship “an amazing opportunity to learn more about federal and tribal relations.”

At Dartmouth, Harris has been studying federal Indian law, and credits the College with teaching her “to think critically about things that I have observed in my everyday life.

Before the pandemic changed the program’s schedule, Harris was slated to work in the office of Montana’s Sen. Jon Tester.

Wamsikuk James applied for a Udall internship ”because I have always been passionate about serving Indian Country in any way I can,“ he says. He was to have worked in the office of Arizona Congressman Raul Grijalva until this year’s internships were deferred due to COVID-19.

An enrolled member of the Wampanoag Tribe of Gay Head (Aquinnah) who also has Oglala Lakota ancestry, he is active in Native Americans at Dartmouth, and has worked as a manager at the Collis Center.

James says his academic interests are driven by ”a desire to help Native peoples, and other historically disadvantaged people in general, as well as by a passion for the study of history, in particular the history of political and economic philosophy.“

He says his Dartmouth experience ”has opened up a world of scholarly exploration not previously available to me, especially my experience in the history department.“

Alayah Johnson-Jennings has had her eye on a Udall internship ”from a young age“ she says, because she has always wanted to expand her knowledge of federal Indian law.

”Much of my academic curiosity is driven by my desire to support to the tribal communities I have been so lucky to be a part of,“ she says.

A member of the Quapaw, Choctaw, Sac and Fox, and Miami Nations, she was assigned to intern with the Minority Party of the Senate Committee for Indian Affairs, and hopes next year ”to have a meaningful experience that allows me to discover how I can better serve the tribes that have been so instrumental in developing who I am.“

Of Dartmouth, she says, ”Dartmouth’s commitment to Indigenous students is very important to me, as many Indigenous alumni have become change makers in communities across Indian country. Through Dartmouth I have met other Indigenous people who actively have committed to change on and off the Dartmouth campus. I have also met so many other allies who are pushing for change in our society as a whole.“

An enrolled member of the Bay Mills Indian Community, Caitlin Wanic is planning a career in both law and medicine—a direction she found while taking a course on a federal Indian law with Samson Occom Professor of Native American Studies Bruce Duthu. She ultimately hopes to be a physician in her tribal health clinic and work for her tribal council. The Udall internship will be her first experience in a law and policy-related field, she says.

An artist and singer—she won this year’s Dartmouth Idol competition—Wanic decided to major in studio art after taking ”Drawing I“ her first year, which made her realize that making art ”would make me happy during my time at Dartmouth,“ she says. While her primary medium is painting, she also makes charcoal drawings and practices traditional Ojibwe beading, among other genres. ”Most of my work has to do with my Ojibwe culture and Native identity,“ she says.

”Dartmouth has provided me with an incredible community of Native students that constantly support and care for each other,“ she says.