The alumna, a MALS lecturer, plans to keep the “irreplaceable” Left Bank going. 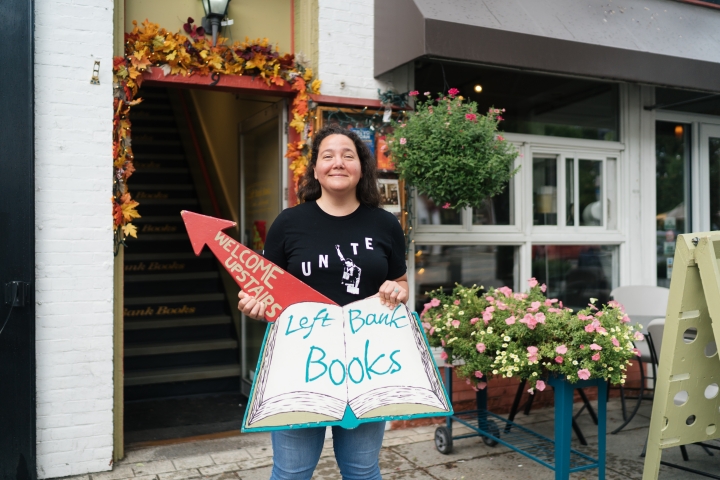 In July, poet Rena Mosteirin ’05—who teaches poetry in Dartmouth’s Master of Arts in Liberal Studies (MALS) program—accepted the keys to the store from Nancy Cressman, who has retired after 13 years in the book trade. For the past six years, Mosteirin has worked part time at Left Bank to supplement her adjunct teaching and editing income.

Of her decision to keep the business going in the midst of a global pandemic that has shuttered several downtown retail businesses, Mosteirin says, “I just felt like if Left Bank closed, our town would lose something that we could never replace.”

The bookstore played an irreplaceable part in Mosteirin’s own education. As an undergraduate English major, Mosteirin, who graduated in 2007 and went on to earn an MFA in writing at Bennington College, says she would often climb the stairs to Left Bank to get “outside of the Dartmouth bubble.”

It was there that she first discovered experimental poetry, including Jen Bervin’s Nets, a collection of spare lyrics composed from the text of Shakespeare’s sonnets, and Tom Phillips’ A Humument, which constructs a visual poetry out of a 19th-century novel. Both books use the found-poetry technique of erasure, in which poets selectively erase portions of a source text to create a new work from what remains.

These books were unlike anything Mosteirin was reading in her English and creative writing classes, and they changed her writing life.

“Erasure and experimental poetry in general were on the margins of the poetry world—it wasn’t something my professors were talking about,” she says. “So I went to Left Bank and discovered different ways of writing poetry, and that lit me up. It was very exciting.”

She has since published her own experimental poems, including a recent chapbook, Half-Fabulous Whales, an erasure of a chapter from Moby-Dick, and Moonbit, a hybrid work combining experimental poetry and critical theory—based on the source code of the Apollo 11 Guidance Computer—which Mosteirin co-wrote with her husband, Assistant Professor of English James Dobson, who directs the Institute for Writing and Rhetoric. She also edits a local online literary journal, Bloodroot.

Mosteirin grew up in Queens, N.Y., in a family of immigrants—her mother’s family is from Gottschee, a formerly autonomous region of Slovenia, and her father left Cuba after the Bay of Pigs invasion.

“Part of the reason I read so much as a kid is that both of my parents come from places I have never been to and that I was made to understand didn’t exist anymore,” she says. “I grew up as part of this transnational community that’s so deeply nostalgic, looking backward, while I was looking forward, trying to figure out how to be an American. I found books like Moby-Dick—the most American story ever—and became obsessed with them. And I became obsessed with things like the moon landing. I felt like, if I can understand that, I can understand the U.S.”

Mosteirin is passionate about all books, and before the pandemic was a regular in Hanover’s Still North Books, which was opened in January by another alumna, Allie Levy ’11. (Still North remains open to curbside pick-up and as of July 13 for browsing by appointment.) But used books are different, she says.

“When you go into a new bookstore you’re seeing books that editors, agents—the gatekeepers of the literary game—are responsible for. Which is great, and leads to all sorts of wonderful books, but the books that have shelf space are all being filtered through the same cultural moment,” she says.

“With used books—even though Left Bank is only 300 square feet—you’re surrounded by hundreds of years of writing, but also decision-making in publishing and printing. The scope is so broad. A used book has the potential to surprise you.”

As Left Bank’s proprietor, Mosteirin says she wants to continue to foster the sense of community the store has long provided to Dartmouth and the Upper Valley. She’s made some small changes—creating a “Black Lives Matter” section and a section called “Pride and Joy,” celebrating LGBTQ writers and literature.

But mostly, she says, “Nancy made Left Bank a magical place, and I see myself as a steward of the community that she developed.”

For now, the store is open five days a week for browsing, for up to four people at a time. “We’re asking that everybody wears a mask. I clean everything every five minutes. I clean every credit card I touch,” Mosteirin says.

When in-person gatherings are possible again, she plans to resume hosting readings and other public events. For Dartmouth students, she says, “If you need a place to hang out or do your homework, it’s the sort of place where there’s no pressure to buy anything, and everyone is always welcome.”

“To me, teaching and editing and writing and the bookstore are all part of being in the literary community,” Mosteirin says. “They’re all pieces of living my dream, which is being a poet and a literary citizen who does this work to build community and boost other people’s voices.”