The associate professor credits the tech transfer office for shepherding his start-up. 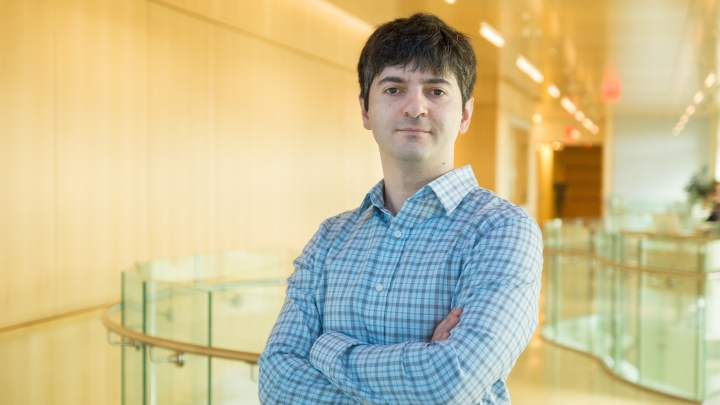 Gevorg Grigoryan, an associate professor of computer science, says support from Dartmouth’s technology transfer office played an important role in the launch of his start-up, Generate Biomedicines, which just received a $50 million investment from a leading biotech venture capital firm.

Grigoryan’s lab has developed algorithms to extract fundamental insights from protein structural data accumulated worldwide over the past 60 years, and thus to permit the computational design of biological therapies for specific diseases. The process helps researchers develop new medicines in a fraction of the time, says Grigoryan, who is also an adjunct professor of biology and chemistry.

“We are thrilled that Gevorg’s discoveries are attracting the substantial resources needed to advance this important work to the next level,” says Dean Madden, vice provost for research and director of the COBRE Institute for Biomolecular Targeting, which funded some of Grigoryan’s early work.

“It is a great testament to the ingenuity and the potential of his approach. It is also such an inspiring model for how excellent research at Dartmouth translates into social good while creating a positive economic impact,” Madden says.

In the past year, the technology transfer office—part of the Dartmouth Office of Entrepreneurship and Technology Transfer—has filed more than 100 new patent applications on Dartmouth inventions, entered into 32 license agreements, and assisted investigators in forming six new companies to commercialize technologies resulting from Dartmouth research. Tech transfer has also assisted Dartmouth faculty, staff, students, and community members with more than 400 agreements relating to material transfers and relationships with industry.

Grigoyan says the office provided vital assistance when he first started thinking about how to commercialize his research and took the lead in negotiating the agreement that was essential to the launch of Generate Biomedicines.

“I did get lucky in lots of ways, but one of the important ways was that I got fantastic feedback from everyone at tech transfer,” he says.

“It was critical that Gevorg disclosed his invention to our office so that we could file for patent protection before he published or shared his research, which could have blocked its patentability,” she says.

The licensing and business development managers in the office also connected him with the entrepreneurial ecosystem at Dartmouth, Grigoryan says, where he found support from the Tuck School of Business, the Magnuson Center for Entrepreneurship, and alumni entrepreneurial networks. A connection at MIT, where he had earned his PhD, ultimately that led to the co-founding of Generate with Flagship Pioneering, a venture creation firm that counts among its start-ups Moderna, which is developing a vaccine for the novel coronavirus.

When the time came to negotiate a deal with Flagship, tech transfer stepped up again, Grigoryan says. By managing the legal and business issues, the tech transfer office allowed him to focus on the science and avoid conflicts of interests as both a Dartmouth faculty member and a principle in a startup licensing the intellectual property, he says.

“They allowed me to be disconnected from that process.”

Federal law requires that institutions transfer discoveries resulting from federally funded research to the commercial marketplace. It is a social compact which benefits society, but also recognizes that the institution and the researchers are entitled to benefit from the intellectual property, Rosenfield says.

“Dartmouth is in the business of education, disseminating knowledge, creating new knowledge. We’re not in the business of getting regulatory approval, manufacturing, distribution, or marketing,” Rosenfield says. “So, if we want this knowledge to get out into the world where it can do good, we have to work with other sectors. Our tech transfer office is the bridge to those other sectors.”