The poet and assistant professor of English is among 10 writers recognized in 2021. 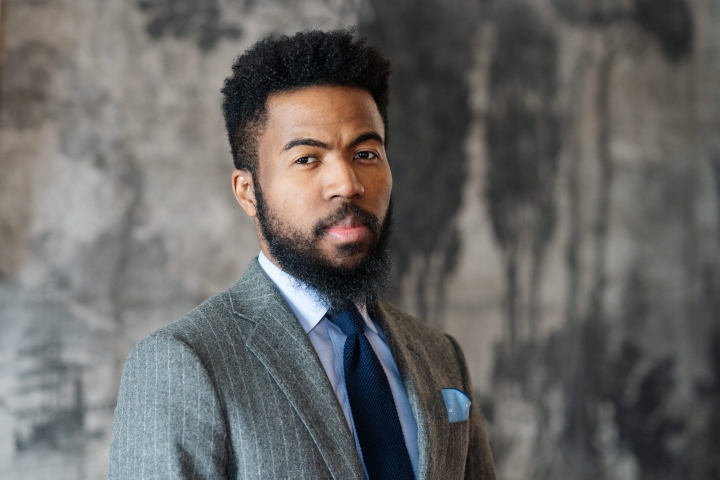 Assistant Professor Joshua Bennett has recently won a Guggenheim Fellowship in addition to the 2021 Whiting Award for poetry and nonfiction. (Photo by Eli Burakian ’00)
4/15/2021
Body

On the heels of the announcement of his Guggenheim Fellowship, Assistant Professor of English and Creative Writing Joshua Bennett has won a 2021 Whiting Award for poetry and nonfiction—joining a cohort of 10 emerging writers whose work shows “early accomplishment and the promise of great work to come,” according to the Whiting Foundation website.

“Joshua Bennett’s criticism radically expands ideas of what it is to be alive in the world, reshuffling hierarchies of knowledge and power and hinting at a new way of being; the most exciting criticism is utopian in this way,” the selection committee wrote in its citation.

“His poetry is piercingly intelligent—there is so much yearning and emotion alongside a mesmerizing musical craft. It welcomes us intimately into the speaker’s powerful consciousness, into the landscape of his family, his outsiderhood. Bennett takes up the legacy of W. E. B. Du Bois in his fluid movement between genres, illuminating what it means to see things as they are and to call them by their most merciless names.”

Bennett is the author of Being Property Once Myself: Blackness and the End of Man, a work of literary criticism that explores 20th- and 21st-century Black writers writing about animals and the boundaries of the human and nonhuman, as well as two books of poems—the National Poetry Series-winning The Sobbing School and, most recently, Owed, which, as the wordplay in its title suggests, explores notions of both obligation and praise.

Candidates for the Whiting Award are nominated by an annually changing pool of anonymous literary professionals, and the winners are chosen by a small committee of prominent writers, editors, and scholars appointed by the foundation. The prize comes with an award of $50,000.

“I’m immensely thankful to be part of a cohort comprised of so many dynamic, courageous, inventive writers,” Bennett says. “Winning this award feels like a singular opportunity, and a real moment of encouragement for the kinds of work I have committed my life to. It means a great deal to be able to share that occasion with friends.”

Bennett is a graduate of the University of Pennsylvania who went on to study theater and performance at Warwick University as a Marshall Scholar and to complete his PhD at Princeton. He joined the Dartmouth faculty in 2018, drawn by the students, whom he calls “truly remarkable,” and by colleagues in the Department of English and Creative Writing and the Program in African and African American Studies, whose support helped him “preserve my heart and mind” as he began “my first job, published my debut work of literary criticism, and most recently, became a father during a global pandemic,” he says.

“I also want to mention how how instrumental institutional spaces like the Hurston/Wright Foundation, Cave Canem, and the Callaloo Creative Writing Workshop have been to my growth as a poet over the years,” he says. “It was through programming provided by these Black organizations that I encountered the poets who helped hone my practice not only as a writer, but as a teacher as well. It’s critical, I think, that we invest in their future.”

The Whiting Awards were announced yesterday during a virtual ceremony. Bennett’s citation, followed by his reading of two poems, begins at 16:59 in the video.