The museum has completed a multiyear process to acquire more than 6,000 photographs. 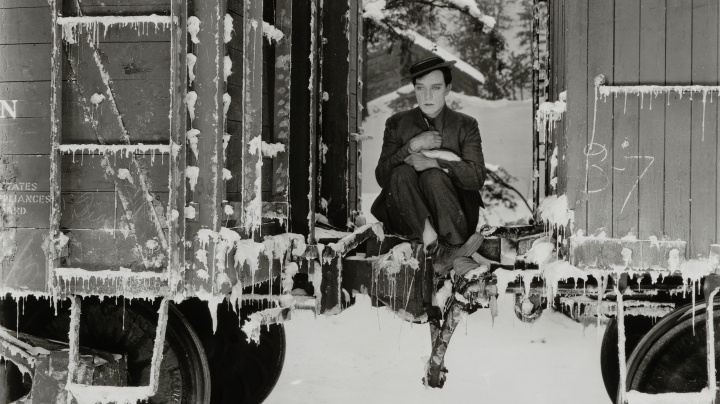 Buster Keaton in the 1925 silent film Go West, from the John Kobal Foundation archive. (Image courtesy of the Hood Museum of Art)
6/03/2021
Body

The Hood Museum of Art has completed a multiyear process to acquire more than 6,000 Hollywood photographs—with shots of movie stars such as Buster Keaton, Lillian Gish, and Marlon Brando—from the John Kobal Foundation.

“Can we even study the United States in the 20th century,” asks John Stomberg, the Hood Museum’s Virginia Rice Kelsey 1961s Director, “without a long look at how the movie industry reflected and even promoted worldviews, ethics, morals, and historical (mis)understandings?”

Set up to continue the work of its founder, who lived from 1940 to 1991, the foundation divided its efforts between grant-making for photographers and promoting the photography collection that Kobal had amassed, which traces the history of Hollywood from approximately 1916 to the 1970s.

With this archive, the museum will be able to aid the research of faculty and students interested in the history reflected in these images. The museum will exhibit a selection of the photos in winter and spring 2022, and presently features highlights on its website.

“Kobal’s collection of Hollywood photography is an outstanding source for research and teaching of motion picture history, still photography, and portraiture,” says Professor of Media and Film Studies Mary Desjardins. “The collection is exciting as a pedagogical tool because it allows the historian-teacher to chart the history of 20th-century American culture through the fantasies of and ideals created out of Hollywood films and their stars.

”The collection’s breadth—containing the full range of genres of Hollywood photography of film stills, portraits, and publicity shots—provides evidence for studies of the film industry as an economic system of mass cultural production that extended its reach beyond the production and circulation of motion pictures.“

Much of the acquired collection consists of vintage prints produced around the time the negative was created, and some of it emerged from a project Kobal initiated in the 1970s, by which time he had acquired thousands of negatives from the studios that no longer valued what they held. He located many of the photographers who worked at the studios in Hollywood’s golden age and arranged for them to create magnificent new prints from their negatives. There are also photographs recently printed from original negatives that were included in a series of exhibitions circulated in the past decade; the negatives remain with the foundation.

The story of the people charged with creating and selling the image of Hollywood is relatively new. While there was a small army of photographers working behind the scenes to record stars and films, their names mostly eluded recognition before Kobal zealously wrote about them. These include George Hurrell, Laszlo Willinger, Clarence Sinclair Bull, and Ted Allan. Ruth Harriet Louise, the pioneering lone female photographer working in Hollywood in the 1920s and early 1930s, is also well represented.

The role of these artists was to create glamorous portraits of the stars. They also worked on the sets documenting films in production and provided ”behind-the-scenes“ glimpses into the magic of Hollywood. They ”sold" the studios, the stars, the movies, and the fantasy of a glamorous lifestyle—one we have learned to interrogate carefully.

The vintage 11 x 14 photographs, printed under the supervision of the photographers, were reproduced in smaller formats (often numbering in the tens of thousands) and sent out to fans, news outlets, and magazines, all anxiously awaiting the new images. Kobal started young, collecting what he could find at antique stores and flea markets, first in Canada, later in California and London.

As his career in Hollywood journalism took off, Kobal visited press offices for most of the major studios in California. By the 1960s and early ’70s, the outdated master photographs cluttering their files were no longer of interest. Kobal carted away box after box of original photographic prints, finally bringing them to London, where his collection continued to grow.