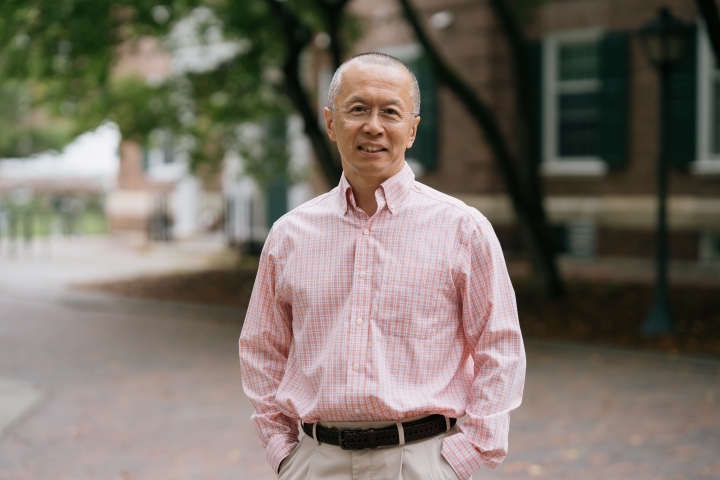 Yusaku Horiuchi, a professor of government, is the co-author of a study examining the impact of public diplomacy on foreign public opinion. (Photo by Eli Burakian ’00)
7/12/2021
More Reading

When a head of state or government official travels to another country to meet with a counterpart, the high-level visit often entails a range of public diplomacy activities that aim to increase public support in the host country. These activities can include events such as hosting a joint press conference, attending a reception or dinner, visiting a historic site, or attending a social or sports event. A new study finds that public diplomacy accompanying a high-level visit by a national leader increases public approval in the host country of the visiting leader’s job performance.

The findings are published in the American Political Science Review.

“Bilateral meetings provide world leaders with a forum to talk about the real issues. Yet a visiting national leader will also often spend a significant amount of time on image building, as the visiting country strives to improve its image around the world,” says co-author Yusaku Horiuchi, a professor of government and the Mitsui Professor of Japanese Studies.

“The simple fact that time and money are allocated for image-building activities as part of these high-level visits suggests that many countries actually think that these public diplomacy campaigns matter. Yet until now, there has been little if any well-identified causal evidence,” says Horiuchi. “Our study is the first to show the effectiveness of public diplomacy and how it can shape foreign public opinion.”

For the study, political scientists from Dartmouth, the Australian National University, and Florida State University examined data on high-level visits made by 15 leaders from nine countries over 11 years (from 2008 to 2018). Eighty-six visits by leaders from nine major countries—Brazil, Canada, China, Germany, India, Japan, Russia, the U.K., and the U.S.—were analyzed. The team obtained data on the high-level visits and combined it with Gallup World Poll data to examine how public opinion about a visiting leader can change from five days before the visit to five days after the visit.

Through a statistical analysis, the results show that public approval of a visiting leader’s job performance increases on average by 2.3 percentage points when the leader visits a foreign county. As the researchers explain, the effect on public opinion does not fade immediately, as it lasts up to two and a half weeks and is especially strong when public-diplomacy events are covered by the news media. This effect is also especially large when a new leader visits another country during their first year in office, a phenomenon that the researchers call the “soft-power honeymoon” effect. When a new leader visits another country, the effect on the public’s approval rating of the leader can be double that of a leader who has been in office for five years or more.

The researchers found that the effect on public opinion is much stronger for the visiting leader than for the host leader, illustrating that there was no “coattail” effect: Host leaders do not appear to leverage the popularity of visitors to boost their own approval ratings.

“Our results suggest that ‘soft power,’ a term coined by Joseph Nye, referring to a country’s ability to influence international outcomes by attraction and persuasion rather than by coercion or payment, can impact foreign public opinion,” says Horiuchi.

As part of the analysis, the researchers examined the power ratios between the visiting and host countries based on data from the Correlates of War Project, quantitative data on the incidence and extent of war in the post-Napoleonic period. The data show that public diplomacy’s effect on public approval in a host country does not depend on the balance of military power, also known as “hard power,” between the two countries. The findings provide evidence that soft power is independent of hard power and, as the researchers conclude, that public diplomacy should not be dismissed as merely a performance.

The study was co-authored by Benjamin E. Goldsmith at the Australian National University, a longtime collaborator with Horiuchi, and Kelly Matush at Florida State University, a former postdoctoral fellow (2018-19) at the Dickey Center for International Understanding.

The results of the recent study build on earlier research by Horiuchi and Goldsmith on U.S. public diplomacy and foreign public opinion that was published in The Journal of Politics and World Politics.