Pottery vessels that had held beer were found with human remains in a platform mound. 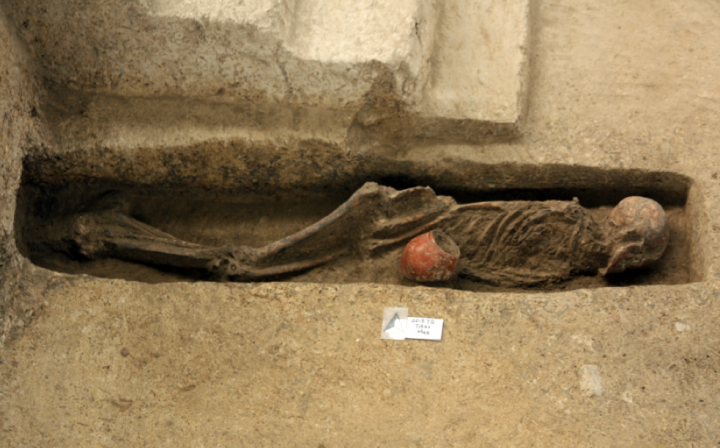 Human burial 1 (M44) is one of the archaeological features from Qiaotou platform mound. (Photo by Leping Jiang)
9/02/2021
Body

Alcoholic beverages have long been known to serve an important socio-cultural function in ancient societies, including at ritual feasts. A new study finds evidence of beer drinking 9,000 years ago in southern China, which was likely part of a ritual to honor the dead. The findings are based on an analysis of ancient pots found at a burial site at Qiaotou, making the site among the oldest in the world for early beer drinking. The results are reported in PLOS ONE.

The ancient pots were discovered in a platform mound, which was surrounded by a human-made ditch, based on ongoing excavations at Qiaotou. No residential structures were found at the site. The mound contained two human skeletons and multiple pottery pits with high-quality pottery vessels. As the study reports, these artifacts are probably some of “the earliest known painted pottery in the world.” No pottery of this kind has been found at any other sites dating to this time period.

The research team analyzed different types of pottery found at Qiaotou. Some of the pottery vessels were small and similar in size to drinking vessels used today, and to those found in other parts of the world. Seven of the 20 vessels, appeared to be long-necked Hu pots, which were used to drink alcohol in the later historical periods. 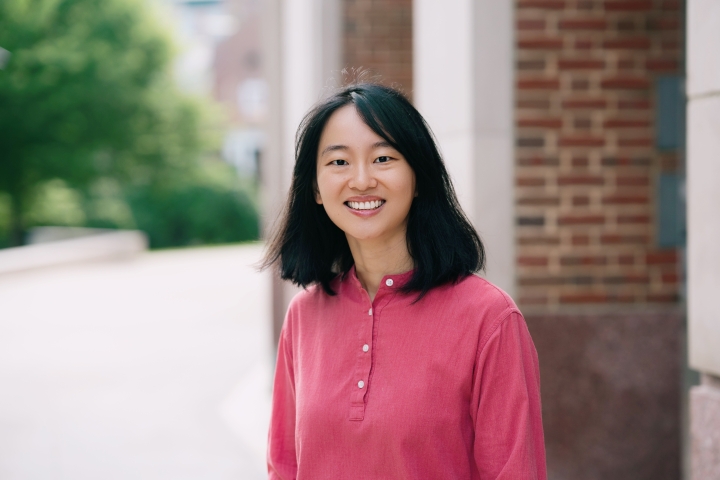 Jiajing Wang, assistant professor of anthropology, is the co-author of a study that found evidence of ancient beer drinking in southern China. (Photo by Eli Burakian ’00)

To confirm that the vessels were used for drinking alcohol, the research team analyzed microfossil residues— starch, phytolith (fossilized plant residue), and fungi, extracted from the interior surfaces of the pots. The residues were compared with control samples obtained from soil surrounding the vessels.

The team identified microbotanical (starch granules and phytoliths) and microbial (mold and yeast) residues in the pots that were consistent with residues from beer fermentation and are not found naturally in soil or in other artifacts unless they had contained alcohol.

“Through a residue analysis of pots from Qiaotou, our results revealed that the pottery vessels were used to hold beer, in its most general sense—a fermented beverage made of rice (Oryza sp.), a grain called Job’s tears (Coix lacryma-jobi), and unidentified tubers,” says co-author Jiajing Wang, an assistant professor of anthropology. “This ancient beer though would not have been like the IPA that we have today. Instead, it was likely a slightly fermented and sweet beverage, which was probably cloudy in color.”

The results also showed that phytoliths of rice husks and other plants were also present in the residue from the pots. They may have been added to the beer as a fermentation agent.

This ancient beer though would not have been like the IPA that we have today.

Although the Yangtze River Valley of southern China is known today as the country’s rice heartland, the domestication of rice occurred gradually between 10,000 and 6,000 years ago, so 9,000 years ago, rice was still in the early stage of domestication. At that time, most communities were hunter-gatherers who relied primarily on foraging. As the researchers explain in the study, given that rice harvesting and processing was labor intensive, the beer at Qiaotou was probably a ritually significant beverage.

The residue analysis of the pots also showed traces of mold, which was used in the beermaking process. The mold found in the pots at Qiaotou was very similar to the mold present in koji, which is used to make sake and other fermented rice beverages in East Asia. The results predate earlier research, which found that mold had been used in fermentation processes 8,000 years ago in China.

Beer is technically any fermented beverage made from crops through a two-stage transformation process. In the first phase, enzymes transform starch into sugar (saccharification). In the second phase, the yeasts convert the sugar into alcohol and other states like carbon dioxide (fermentation). As the researchers explain in the study, mold acts kind of like an agent for both processes by serving as a saccharification-fermentation starter. 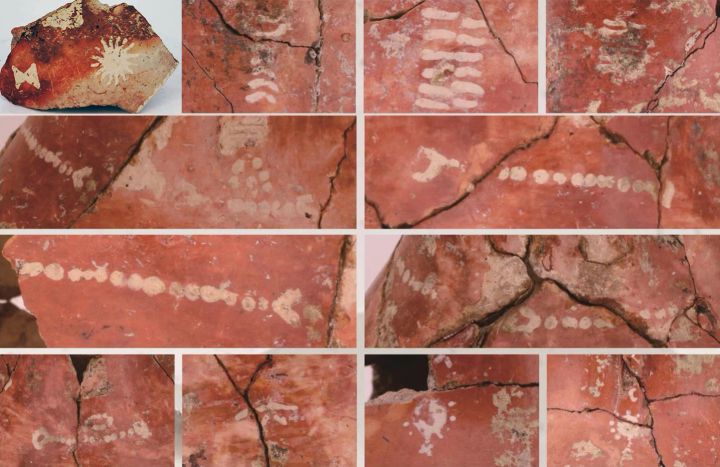 A selection of painted patterns from Qiaotou. (Photo by Leping Jiang)

“We don’t know how people made the mold 9,000 years ago, as fermentation can happen naturally,” says Wang. “If people had some leftover rice and the grains became moldy, they may have noticed that the grains became sweeter and alcoholic with age. While people may not have known the biochemistry associated with grains that became moldy, they probably observed the fermentation process and leveraged it through trial and error.”

Given that the pottery at Qiaotou was found near the burials in a non-residential area, the researchers conclude that the pots of beer were likely used in ritualistic ceremonies relating to the burial of the dead. They speculate that ritualized drinking may have been integral to forging social relationships and cooperation, which served as a precursor to complex rice farming societies that emerged 4,000 years later.

Leping Jiang and Hanlong Sun at Zhejian Provincial Institute of Cultural Relics and Archaeology in China, also served as co-authors of the study.