Ahnili Johnson-Jennings ’23 maps the crisis of violence against Indigenous women.

Ahnili Johnson-Jennings ’23 used the GIS mapping skills she learned in Neukom Fellow Dani Poole’s geography class to show a significant correlation between missing and murdered Indigenous women and girls and their proximity to oil fields, mining sites, and the U.S.-Canadian border.

The project built on her Native American community activism dating back to high school. 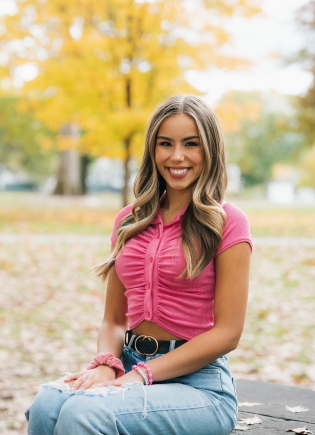 “My interest in all classes is to apply my education to my communities,” says Johnson-Jennings, who is a member of the Choctaw, Quapaw, Sac & Fox, and Miami nations.

“I feel like that’s the reason I’m going to college.”

Poole says her fall-term class, “Humanitarian Emergencies and Geographic Methods,” introduced students to tools including GIS mapping and spatial data visualization to, as she puts it,  “explore the role of place in humanitarian crises.”

Murder is the third-leading cause of death among Indigenous women, but complicated federal, local, and tribal police jurisdiction overlap and what Johnson-Jennings calls institutional neglect mean comprehensive data sets are hard to come by.

“Part of the crisis is it’s not being recorded,” Johnson-Jennings says.

“In 2016, the National Crime Information Center reported 5,712 missing Indigenous women and girls, but the U.S. Department of Justice federal missing persons database, NamUs, only logged 116 cases,” she writes in the introduction to her research.

An important source for her work is information compiled by the Urban Indian Health Institute, which collected data from Freedom of Information Act requests to law enforcement agencies, state and national missing persons databases, searches of local and regional news media online archives, public social media posts, and direct contact with family and community members who volunteered information on missing or murdered loved ones.

Johnson-Jennings says the work of unearthing and publicizing the magnitude of death and loss in Indigenous communities is critical to addressing this crisis.

“There’s not really one direct way to tackle it, as it’s a problem of the whole United States, and across the American continent. So getting the information out there, showing communities the actual numbers, helps people conceptualize how many women are missing.”

That’s why she will continue her research and her advocacy in an academic setting and in her community.

“I’m looking forward to following the impact of her work at the intersection of advocacy and evidence,” says Poole.

Johnson-Jennings adds, “I think it’s just easier for people to conceptualize a problem when there are just physical numbers, which, once again, is very difficult for a crisis that we’re having problems quantifying.”