Highlights include a fashion show and a film about abolishing Native mascots. 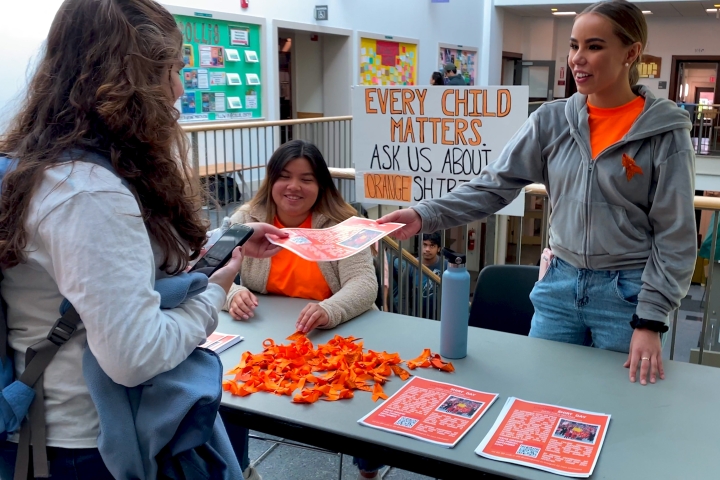 Ahnili Johnson-Jennings ’23, right, and Isabella Newman ’23, seated, hand out information last week about Orange Shirt Day, which raised awareness about the era when Native and Indigenous children in the U.S. and Canada were taken to boarding schools that sought to eliminate their culture. (Photo by Signe Taylor)
10/06/2022
More Reading

There is also a screening at the Loew Auditorium on Monday, the day itself, of the film Imagining the Indian: The Fight Against Native American Mascoting.

“We’re challenging people to think about their assumptions about Christopher Columbus and about this nation in general—challenging them to question their American identity in a way that recognizes who we are as Indigenous people and who we’ve become, despite all the challenges that we’ve faced,” says Ahnili Johnson-Jennings ’23, a member of the Choctaw, Quapaw, Sac & Fox, and Miami nations who, with Aaní Perkins ’23, a member of the Sitka Tribe of Alaska, is co-president of Native Americans at Dartmouth.

“This year, we got an early start on September 30, with Orange Shirt Day,” says Johnson-Jennings. “We encouraged people to make and wear orange T-shirts to recognize an era in United States and Canadian history when Indigenous children were ripped from their families and taken to boarding schools aimed at robbing them of their culture.”

The shirts read: “Every Child Matters.”

We’re challenging people to think about their assumptions about Christopher Columbus and about this nation in general.

Other highlights co-sponsored by NAD, the Native American Program, the Department of Native American and Indigenous Studies, the Hopkins Center for the Arts, and the Hood Museum of Art, which is exhibiting Maḏayin: Eight Decades of Aboriginal Australian Bark Painting from Yirrkala through Dec. 4, include:

An exhibit is being prepared at Rauner Special Collections Library by Sydnie Ziegler ’22, a member of the Mohegan tribe, who holds a fellowship at the library this year. Ziegler represented her nation last April at the Connecticut ceremony with President Philip J. Hanlon ’77 and other Dartmouth officials marking the repatriation of the papers of Samson Occom.

“I would like to think that more people are beginning to understand Indigenous Peoples Day and why it should be observed,” says Ziegler. “It can be celebratory, and it can also be extremely emotional. And I think that having the time to process all of those emotions is really important.”

Indigenous Peoples Day falls within the college’s annual fly-in program, which invites rising seniors living and attending a high school in the U.S. who identify as Indigenous or have demonstrated an interest in the Indigenous community and Dartmouth’s Department of Native American and Indigenous Studies to spend a few days on campus to learn more about the College.

Award-winning poet and author Heid Erdrich ’86, a Turtle Mountain Ojibwe, is teaching a course called “Perspectives in Native American Studies” and has invited many Native alumni to speak to her classes throughout the term. She’s told her students they need not attend class on Indigenous Peoples Day so that they can participate fully in activities and reflect on what it means to be Indigenous—not just for one day, or for one month, but all year long and throughout their lives.

“I don’t think it’s surprising that so many Native alumni go into governance and leadership because we know exactly what we’re up against,” says Erdrich. “That has fostered tremendous solidarity between us, even though we were from all different tribes. At Dartmouth, we grew really close and have supported each other in all aspects of our careers. In my course, we focus on creativity. I’m not saying students have to walk away with some sort of agenda for helping Indigenous communities, but I do want them to see that Native people are all around them.”

They will continue into November, which is Native American/Alaska Native Heritage Month.