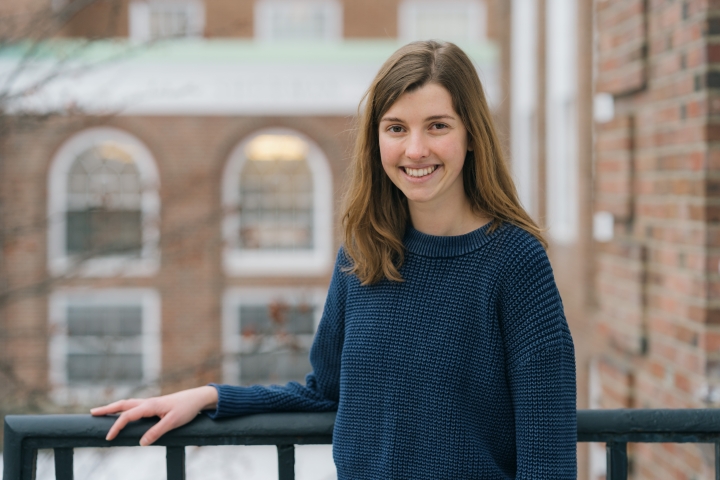 Abigail Dutton is testing a hypothesis that herpes, in mice, can impair memory and learning. (Photo by Eli Burakian ’00)
1/20/2022
More Reading 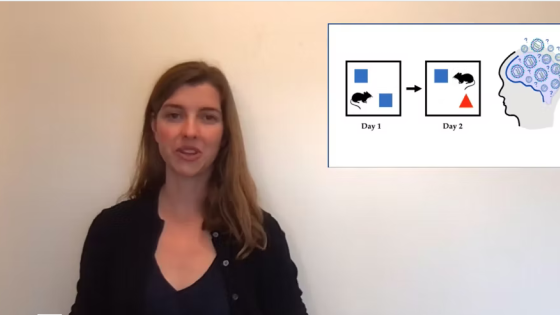 “We’ve learned a lot during the course of the COVID-19 pandemic … how a virus can affect our behavior,” MD and PhD candidate Abigail Dutton says in this short video that recently won second place in the 2021 Ivy+ Three-minute Thesis Competition. “But recent evidence suggests that other viruses may be capable of causing permanent changes to host behavior in the absence of social pressures.”

In a lab at the Geisel School of Medicine directed by David Leib, professor of microbiology and immunology, Dutton, while taking precautions against COVID-19, is studying one of those “other viruses”—herpes simplex.

“It is likely that over two-thirds of us are infected with HSV right now,” Dutton warns. “It has the potential to survive, latent, within our nervous system for decades, traveling not only to the skin, but to the brain.” Dutton has been testing a troubling hypothesis that herpes, in mice, can impair memory and learning in ways that resemble the toll taken on humans by Alzheimer’s disease.

In one of her experiments, a herpes-infected mouse on day one shares a box with two identical objects for 10 minutes. On day two, one of those objects is replaced with something different. A typically curious mouse, Dutton hypothesized, would be more interested by the new object than the old one.

“Exactly the opposite happened,” she says. “The infected mouse did not show a preference for the new object, suggesting a deficit in its ability to learn and remember ‘novel’ versus ‘familiar.’”

Eventually, Dutton hopes to apply lessons about herpes to a clinical practice in pediatrics. She says babies can catch the virus from a mother who may not even know she has it.

“I’m interested how contracting herpes at such an early age might disrupt neural architecture and cause changes in behavior and in the brain, and then consequential neuro-degeneration,” says Dutton. “And that’s what led me on this path. I’m looking at two ends: the aging end of neurodegeneration and the initial end of contracting a disease.”

Abby is very, very driven and takes no prisoners to get the data that she feels is there to be had.

While Leib says Dutton is building on the work of former lab members who have earned their doctoral degrees, including Yike Jiang and Chaya Patel, “Abby is definitely the spearhead, a fearless technology blazer taking us into new territory.” He says the team’s conclusions are based not only on the observed behavior of lab mice, but on data showing changes to their brains.

“There’s a lot of behavioral pathology, but there’s also evidence that as these mice age, they get these lesions in their brains that look indistinguishable from neurodegeneration. Abby is very, very driven and takes no prisoners to get the data that she feels is there to be had. She is remarkable—confident yet humble at the same time. I’m not quite sure how she does it,” says Leib.

Dutton says Geisel and the Guarini School of Graduate and Advanced Studies, where she is pursuing her PhD, offer an ideal double track, allowing her to combine neurological research with clinical training. Having finished her second year at Geisel, she’ll spend two or three more years writing her dissertation before returning for her final year of med school.

Dutton, who attended The Sharon Academy, in Sharon, Vt., says she feels lucky to be able to contribute to global research in the Upper Valley, where her parents also live. In warm weather, she takes breaks from the lab by paddling on the Connecticut River in her inflatable kayak.

“I also like hiking, but I’m not a much of a snow sports person,” she says. “I’m more into keeping warm, cooking, baking, and writing.”