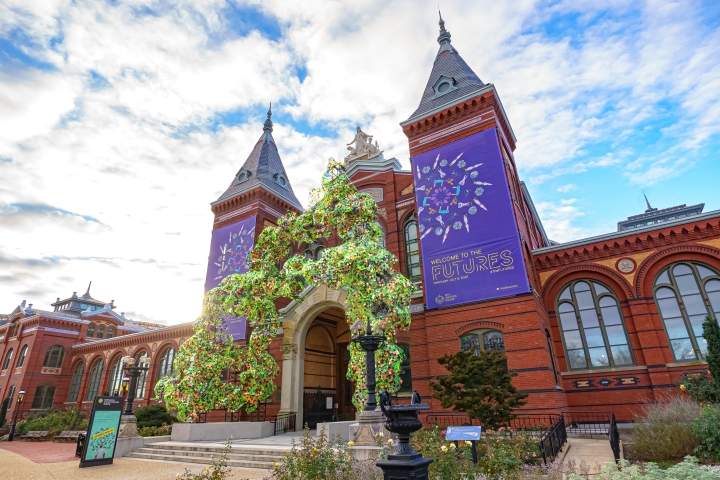 Expanded Present by Soo Sunny Park in “FUTURES” at the Smithsonian Arts and Industries Building on the National Mall in Washington, D.C. (Photo courtesy of Albert Ting)
1/26/2022
More Reading

Artist Soo Sunny Park has always been drawn to the idea of threshold in her work and the idea of liminal space, or the space between two things. It’s a concept that is embodied in her recent installation, Expanded Present, which will grace the main entrance of the Smithsonian’s Arts and Industries Building on the National Mall in Washington, D.C., through July.

Park, a professor of studio art, is one of five artists who were selected to create new commissions for the exhibition, “FUTURES,” to coincide with the 175th anniversary of the Smithsonian and the reopening of the Arts and Industries Building. “FUTURES” explores humanity’s next chapter and features 150 historic objects from the Smithsonian’s vast collections.

With its undulating curves and flickering iridescence, Park’s 50-foot-tall installation appears almost as if it is floating in space over the building’s entrance, creating a threshold between the present, past, and future. Fabricated out of over 40,000 small neon green, dichroic red, and gray plexiglass tiles, which are attached to large stainless steel shaped forms, the sculpture flickers in the light. The dichroic tiles reflect different colors.

“When people view my work, I hope that they get to experience how the light interacts with its elements and that they notice the constant changes and subtle movements with the form, and that they take that image with them, as it’s that moment in time, that temporality in space, which I’m really interested in,” says Park.

Similar to her other installations, which have shown in venues that include the North Carolina Museum of Art, the 2014 Vancouver Biennale, and Rice Gallery in Houston, Park makes Expanded Present look effortless. Yet it is the culmination of countless hours of planning and coordinating logistics, in addition to design, fabrication, and installation.

Sculpture is about conceiving an abstract idea and being willing to trust yourself, so that you can bring your idea to life in the physical world.

One of the challenges of the project was that the AIB is a historic building, where nothing is allowed to touch the exterior. Working with the exhibition’s curator, and consultants from architecture and structural engineering firms, a site-specific truss system was designed for the project to withstand wind and ice loads. 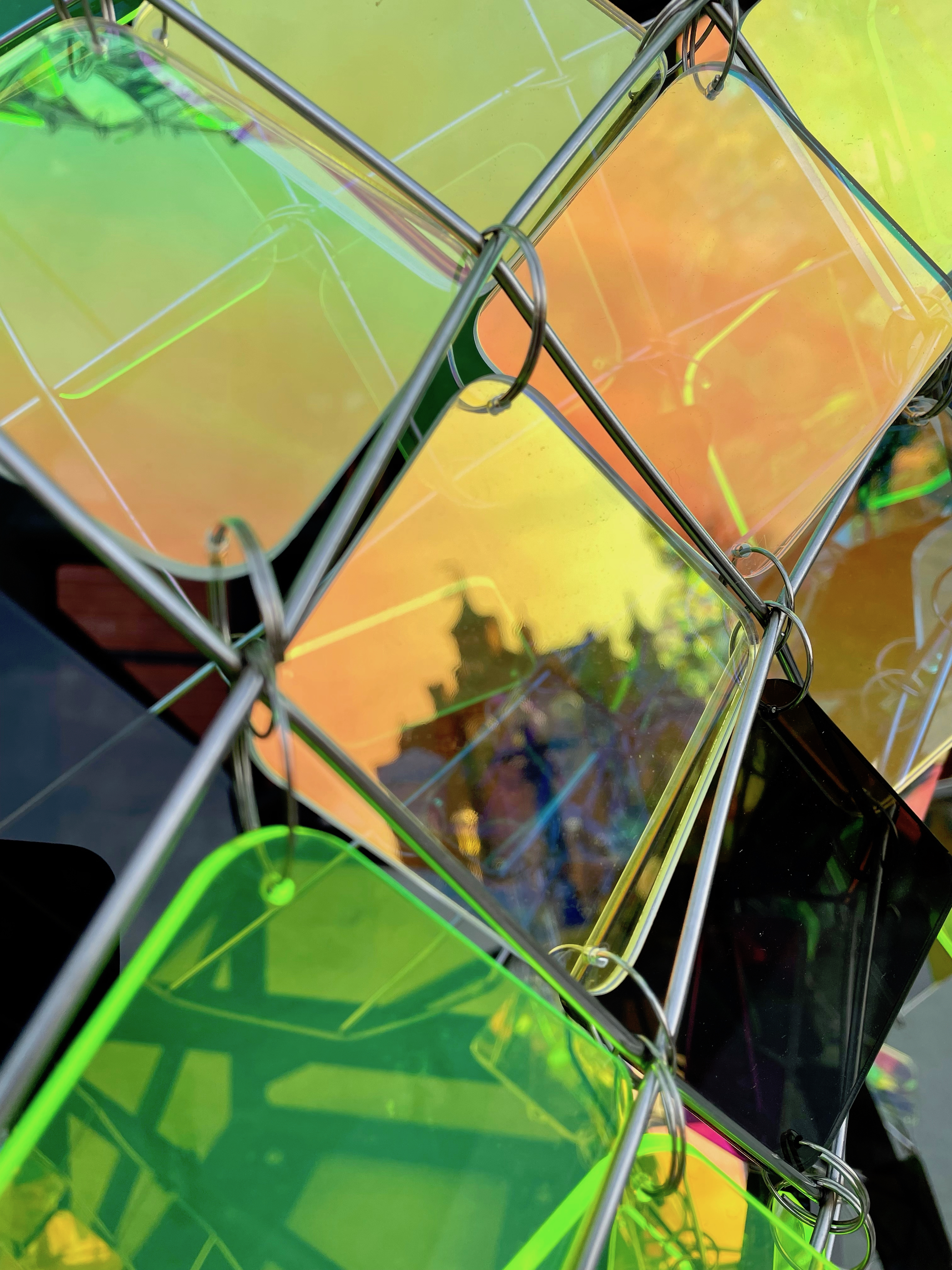 A close-up of the neon green, dichroic red, and gray plexiglass tiles in Expanded Present by Park. (Photo by Soo Sunny Park)

For the plexiglass tiles, Park wanted to use colors that would work well with the AIB’s red brick exterior and windows clad in black trim. She experimented with several color palettes before choosing to work with neon green, dichroic red, and gray.

“During the day, the piece looks really dominated by the neon green color, but at night, during sunset and in the moonlight, the light shifts and the neon green becomes dim and the dichroic red really comes back to life,” says Park. “It’s this wonderful interplay between light, air, and the reflection of moving things nearby, which shifts how the work is experienced.”

Working in her studio, Park created pre-assembled sections for Expanded Present. As part of her design process, Park creates a scale model of the entire piece. As she makes changes to the work, she updates the model.

To create the shaped forms, Park manually pulled stainless steel mesh into six different shapes that are repeated throughout the piece. She created over 60 mesh panels, most of which were 120 inches by 50 inches in size. During the shaping process, sometimes the metal would break, so Park would weld the metal back into place. “As much as you plan out and think through every detail of the piece, there’s a lot of troubleshooting that you have to do during fabrication and installation,” says Park.

Each of the 40,000-plus square plexiglass tiles are small and only about 3 inches in size. The tiles were cut from large sheets of plexiglass on a laser cutter, requiring over 40 days of non-stop cutting. The material was special ordered from Taiwan, but with five weeks of shipping delays due to labor shortages associated with the COVID-19 pandemic, Park’s fabrication schedule became extremely compressed.

“To attach the tiles to the metal shaped forms, I usually do this by hand with wire and pliers, but given the time constraints, I had to come up with another solution,” says Park. “So I used stainless steel key rings.” More than 100,000 key rings were used to fasten the tiles.

Each tile was covered with a protective film on both sides, which need to be pre-peeled in the corners, so that the film could be easily removed later, once on site. With such a tight schedule, Park and her studio assistant enlisted friends to help prepare some of the thousands of tiles and fasten them to the forms.

Even though the work was created in modular panels and compactly packed within matching shapes, the forms were quite voluminous, so a 53-foot semi-tractor trailer was needed to transport the work to the nation’s capital, where Park and her team coordinated the many final installation details.

Reflecting on her experience in creating Expanded Present, Park says that it was consistent with themes that she focuses on when she teaches.

“Sculpture is about conceiving an abstract idea and being willing to trust yourself, so that you can bring your idea to life in the physical world,” says Park. “The goal is not the final product, but it’s about the process, the experience of working directly with the materials and having a dialogue with yourself and what you create.” 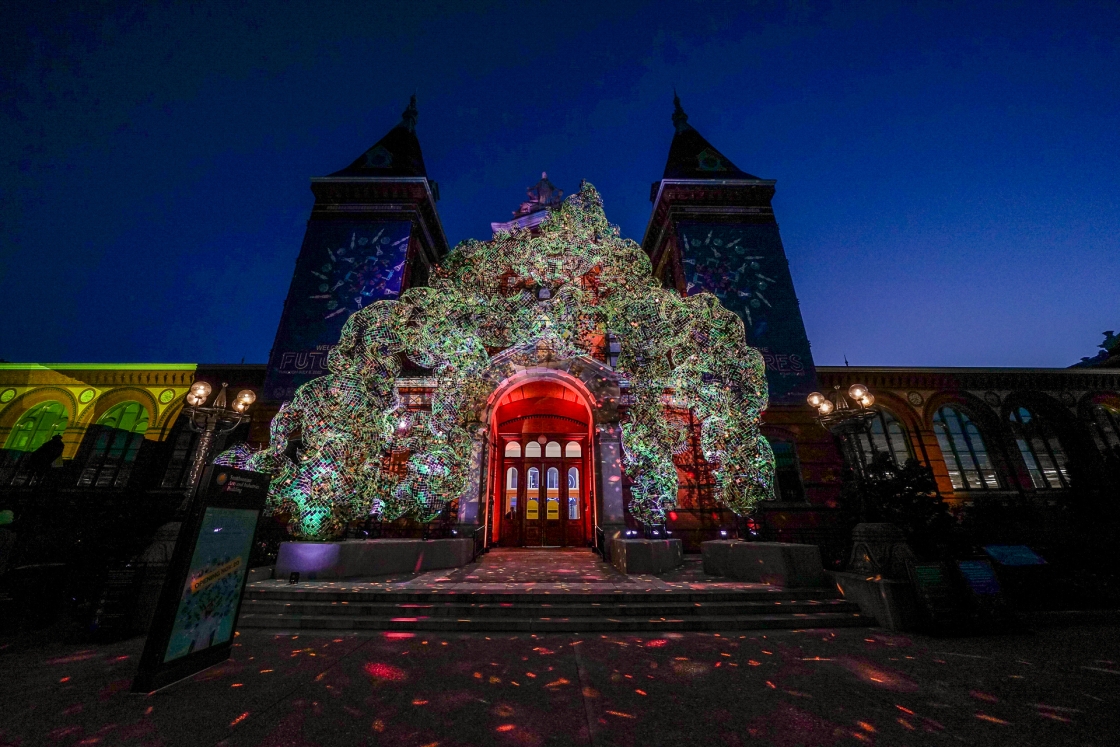 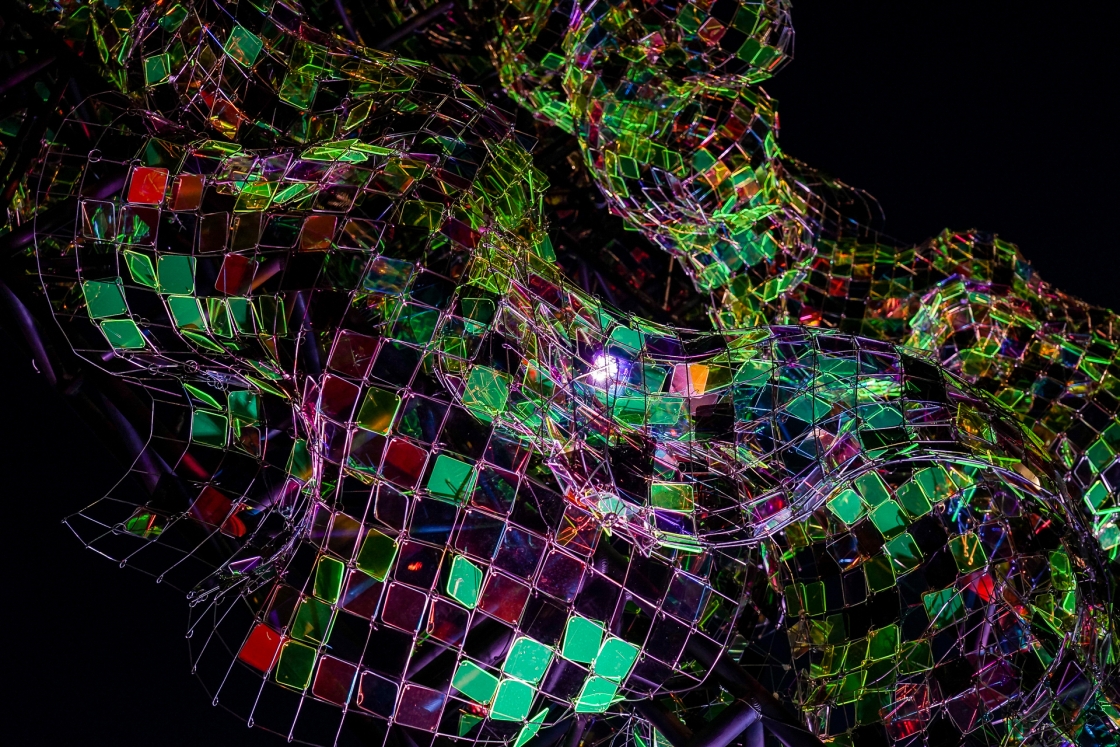 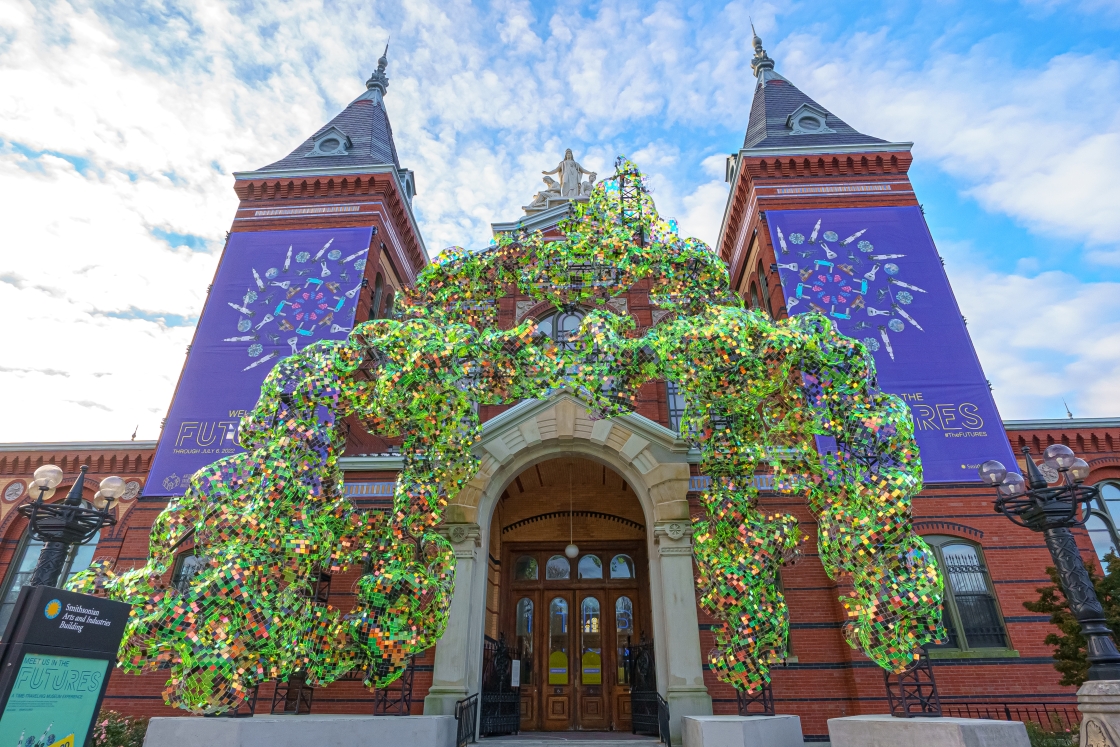 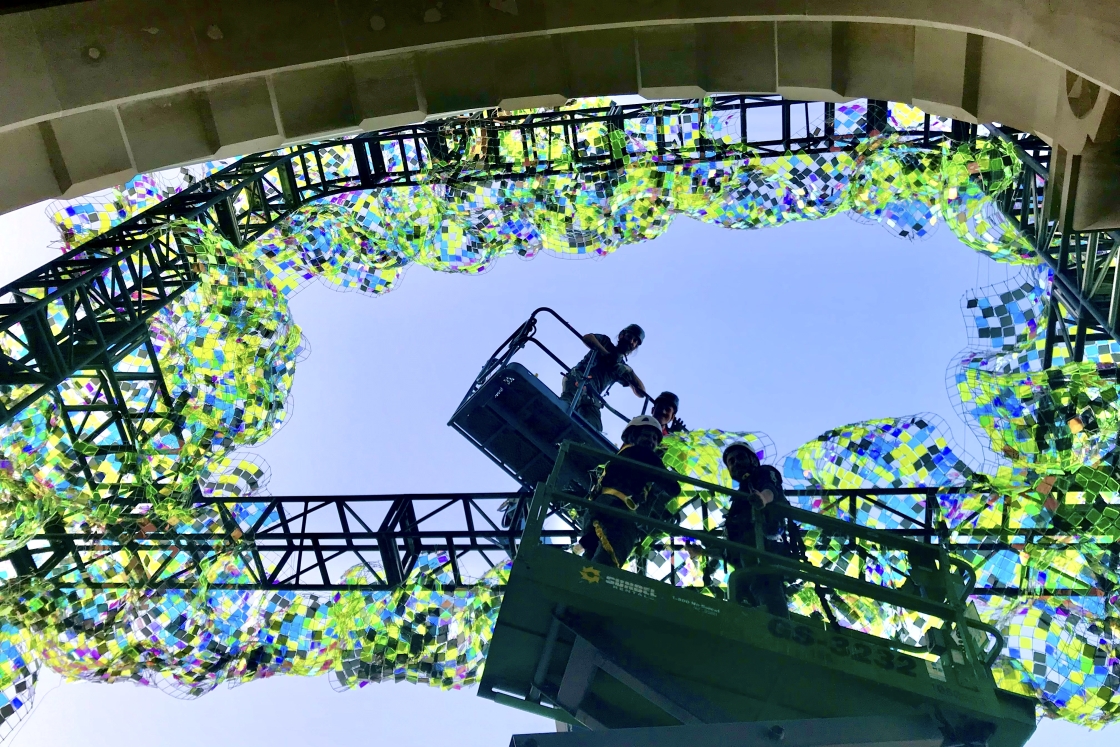 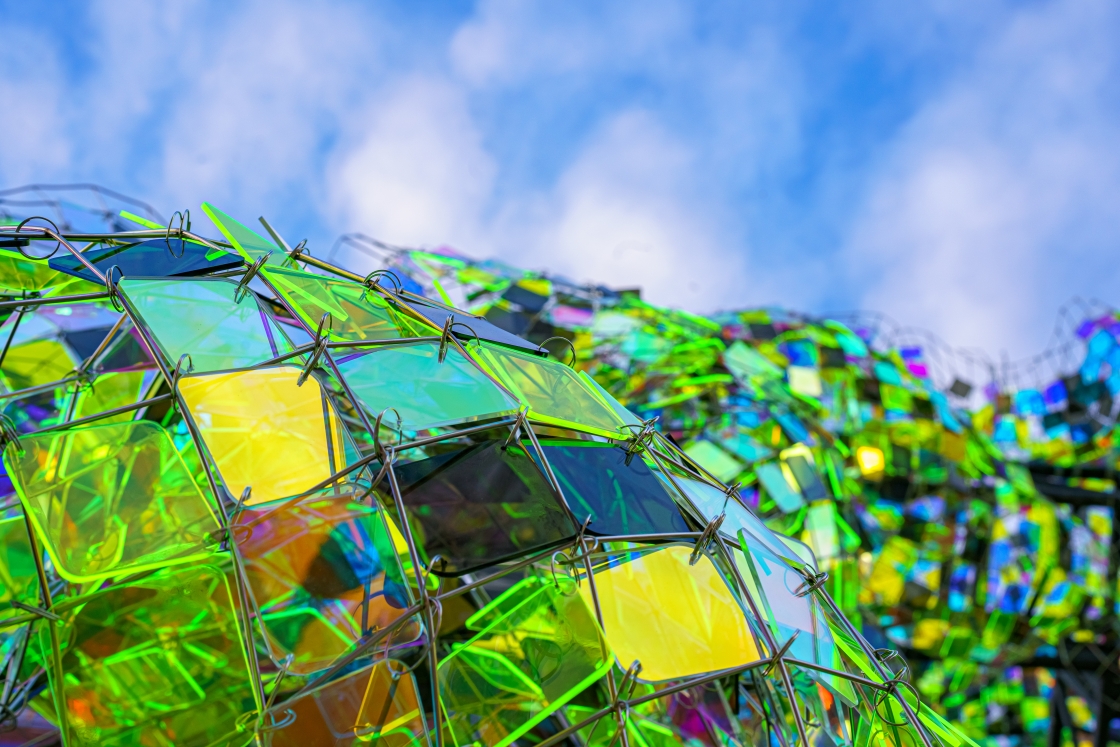 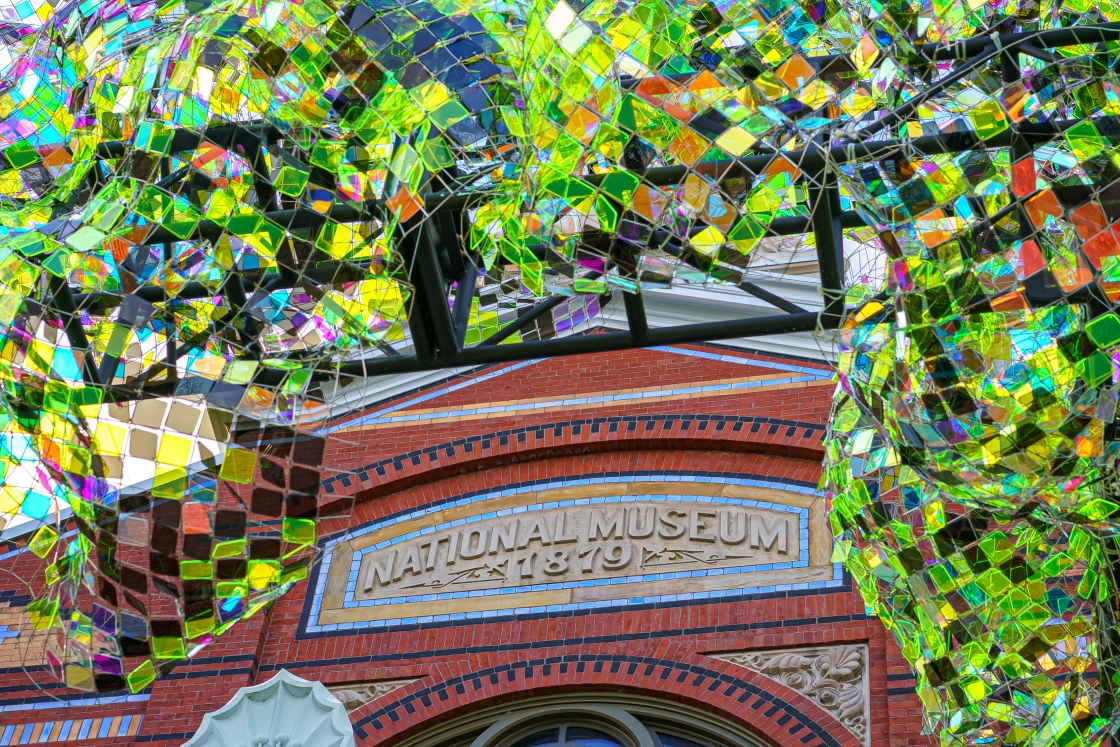 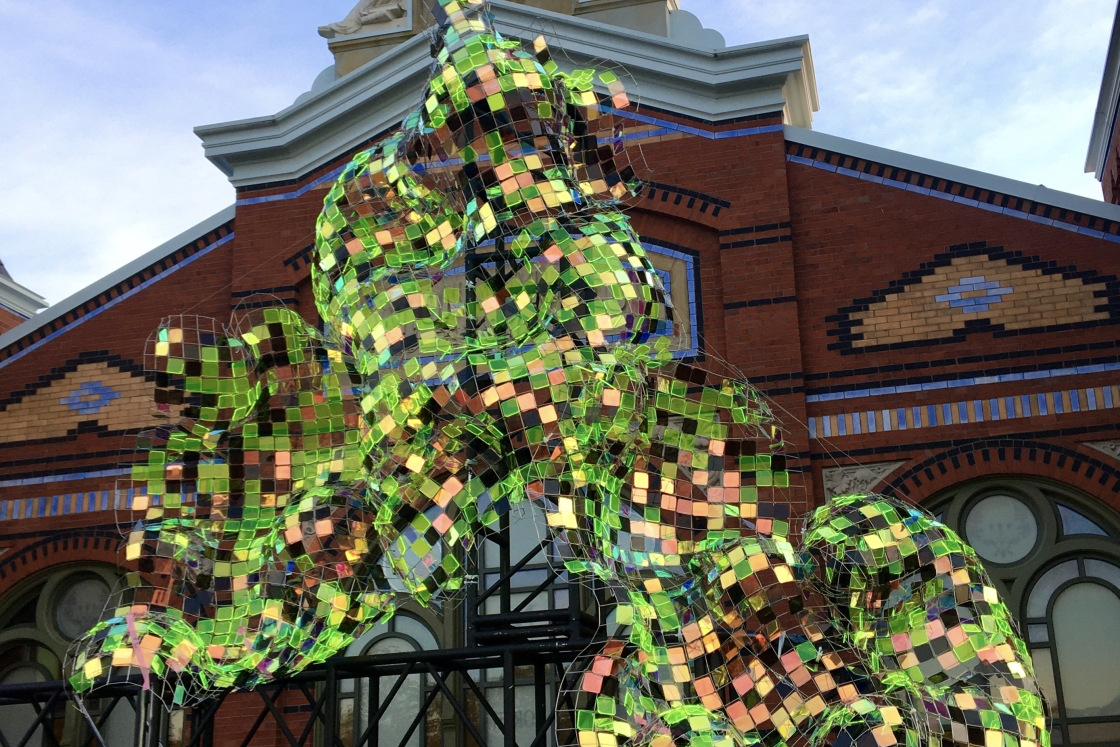 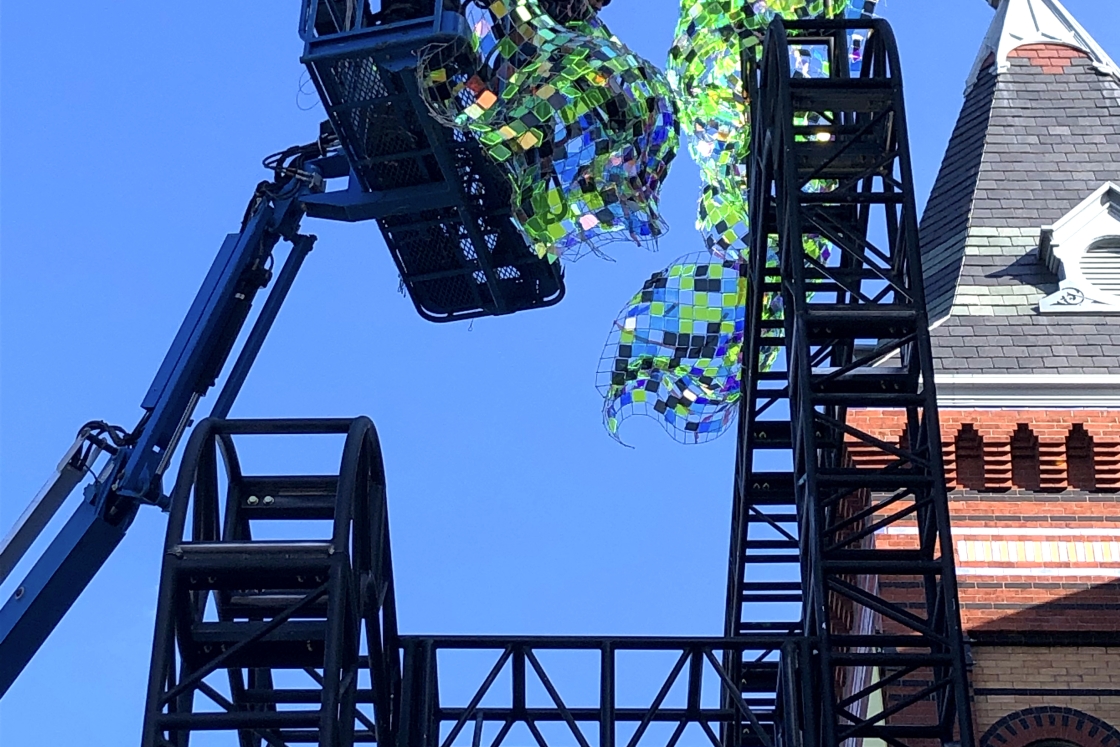 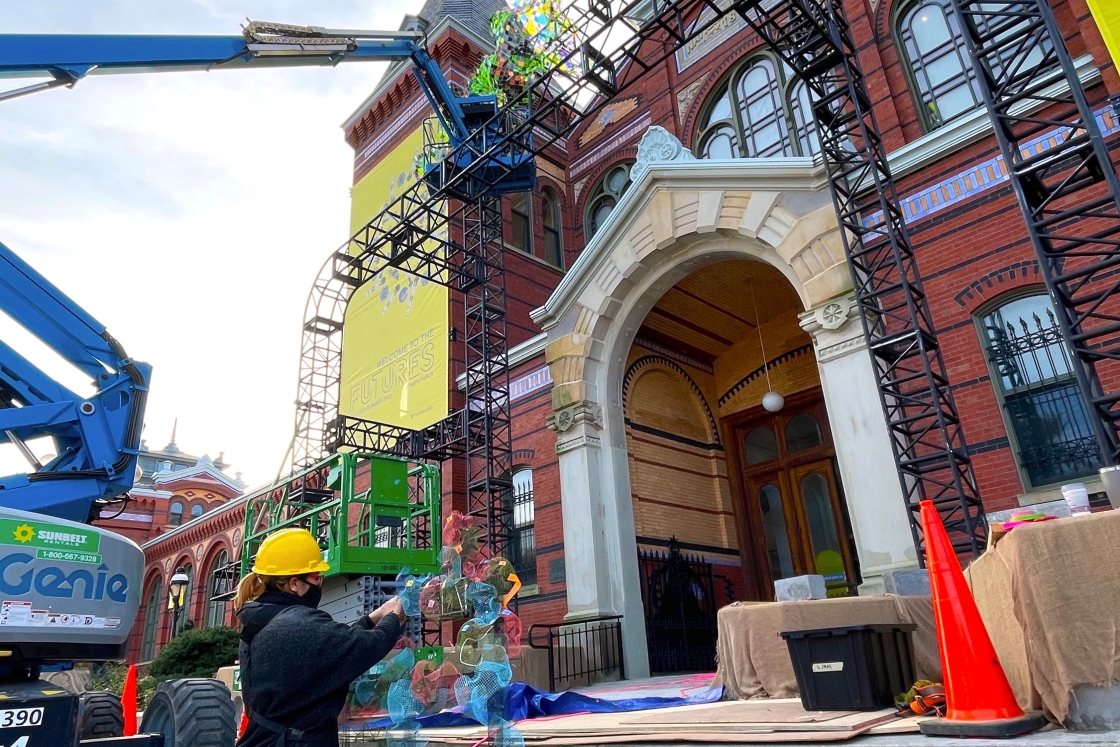 Caption
Soo Sunny Park works on her model of Expanded Present on site at the Smithsonian Arts and Industries Building. (Photo by Leah Nelson)
Image 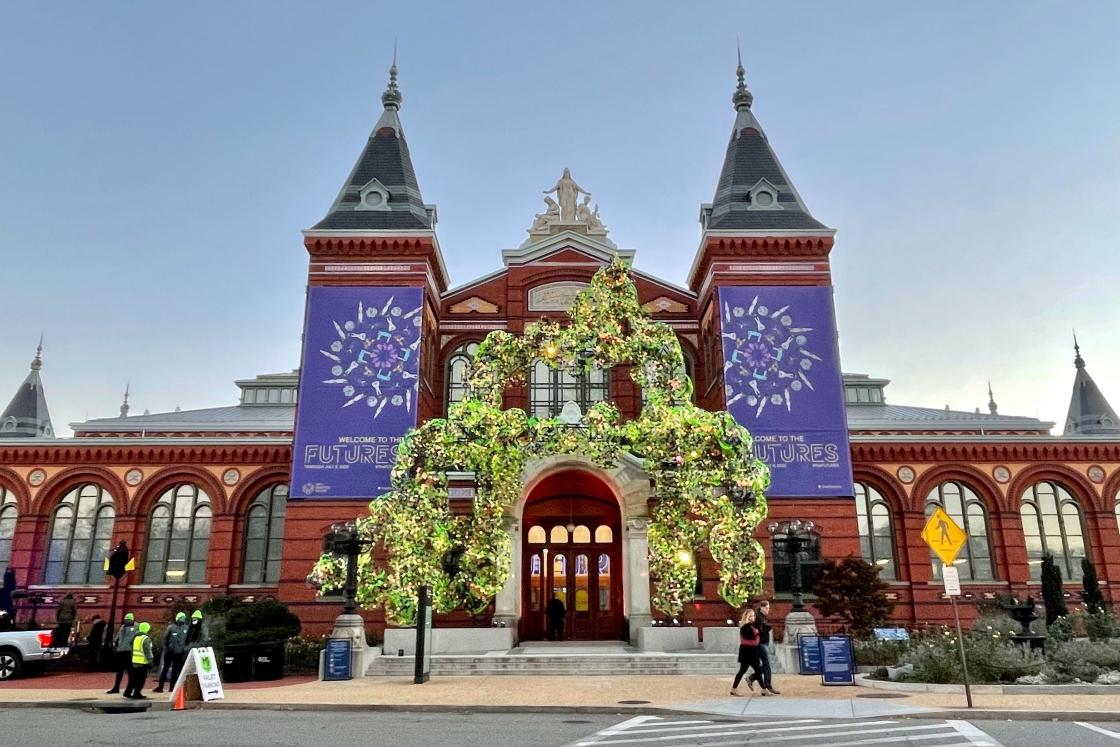 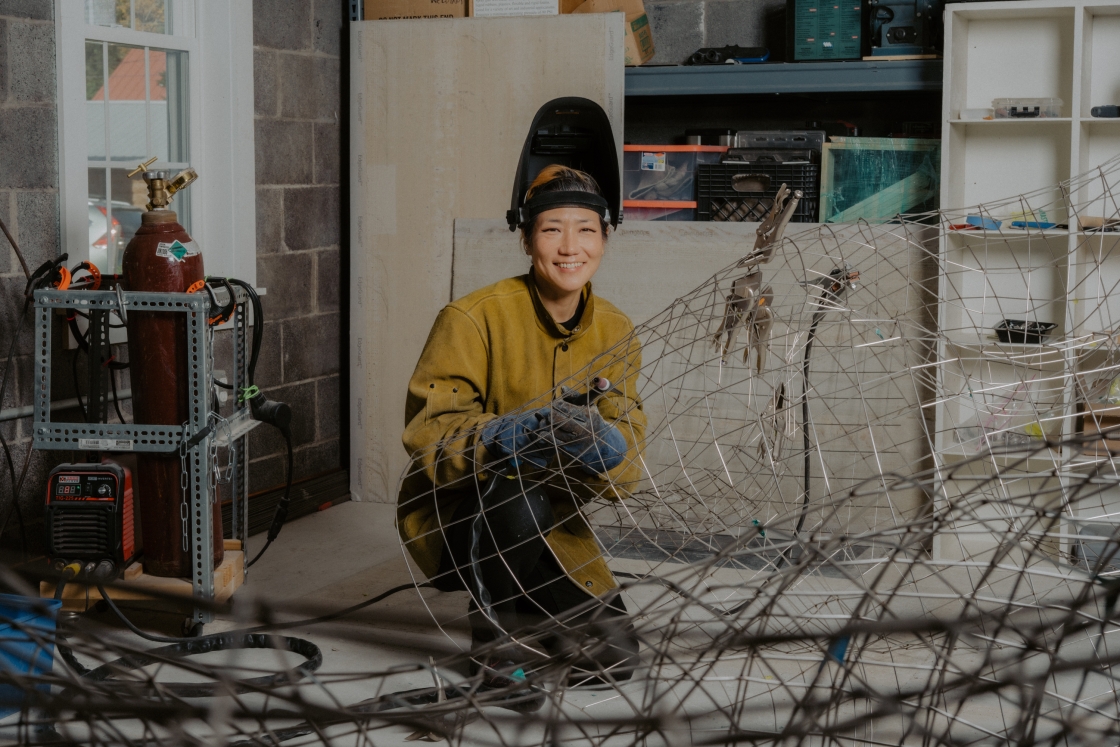 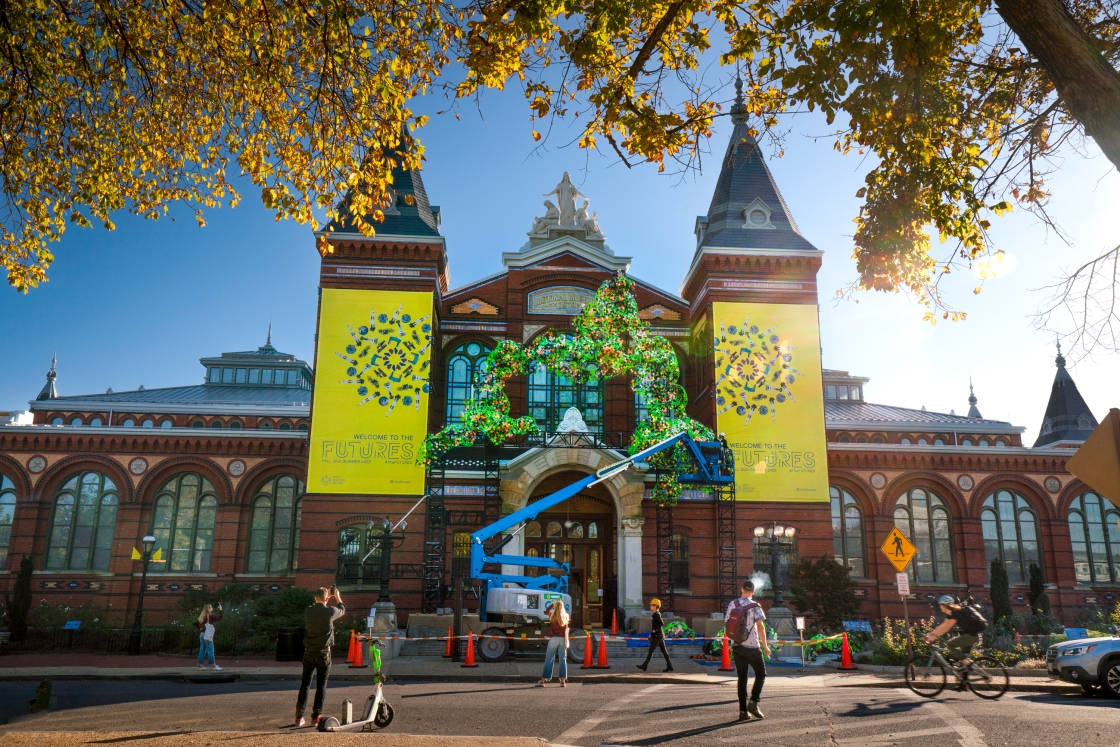