Dartmouth links to the Winter Games reach beyond athletes and coaches. 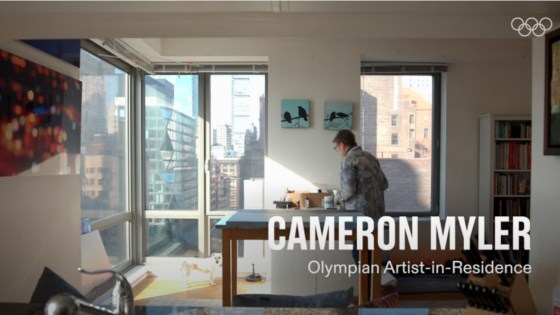 Cameron Myler ’92, a four-time Olympian with the U.S. luge team who majored in geography and studied painting at Dartmouth, was named Olympian Artist-in-Residence to the 2022 Beijing Winter Olympics.

Launched by the Olympic Foundation for Culture and Heritage in 2018, this year’s program “brings seven Olympians with striking artistic talent to the forefront, with artworks inspired by the Olympic values and winter sports,” according to its webpage. Because of COVID-19 restrictions, Olympian artists did not travel to Beijing this year.

Myler, who became a lawyer after retiring from international luge competition and is currently a faculty member with the Tisch Institute for Global Sport at New York University, says she embraces the opportunity to celebrate the Olympic spirit through her painting.

“I feel an extra sense of responsibility to explain that the Olympic Games are much more than just the medal count or what happens on the playing field during the 17 days of competition,” Myler says on the artist-in-residence webpage. “I describe the impact that participating in the Olympic Games has had on my life and explain that it has nothing to do with what place I finished.”

Another Olympian Artist-in-Residence with a Dartmouth connection is Laurenne Ross, a two-time Olympic Alpine skier who attended Tuck Next Step, a three-month management certificate program tailored to elite athletes and military veterans as part of their transition to civilian careers. Ross represented the U.S in downhill racing at the 2014 Winter Olympics in Sochi and at the Pyeongchang Games in 2018. Her artwork uses collage techniques to celebrate the unity and community of the Olympic Games.

World Cup slalom racer for Team USA and later the Greek national ski team, AJ Ginnis ’19 is also involved with the Winter Olympics. But due to a season-ending injury suffered in competition in October, the Dartmouth economics student is covering Alpine skiing in Beijing as an onsite consultant and researcher behind the scenes for NBC, coordinating coverage with broadcasters in studio in the U.S. and at the Games. In an Instagram post, Ginnis thanked NBC Olympics “for giving me the opportunity to come over here and work the games. Obviously, I wanted nothing more than to be competing … but watching all of these inspiring athletes do their thing is pretty amazing.”

Another NBC analyst with world-class skiing credentials and a Dartmouth connection is Hannah Kearney ’15, who won a gold medal with Team USA in the moguls in the Vancouver Games in 2010 and a bronze medal at the 2014 Winter Games in Sochi, Russia. The Norwich, Vt., native is an NBC analyst for the moguls competition.

A sports medicine specialist, physician Christopher Couture, MED ’97, is in Beijing as team doctor to the U.S. cross country ski team. A former athlete, skier, and longtime sports practitioner, Couture told Foster’s Daily Democrat that his job is to monitor the athletes for signs of injury during the competition. Couture joined the U.S. ski team in 2015, adding his name to a roster of doctors who could be called upon anytime to assist the team anywhere in the world. He says he was thrilled to get the call for the 2022 Olympics “That’s incredibly exciting,” Couture told the newspaper.

Also at the Games is Lorelei Wall, Tuck ’06, who is the vice president of marketing for the U.S. Olympic & Paralympic Committee.