Faculty and other experts weigh in on the attack and what it could mean. 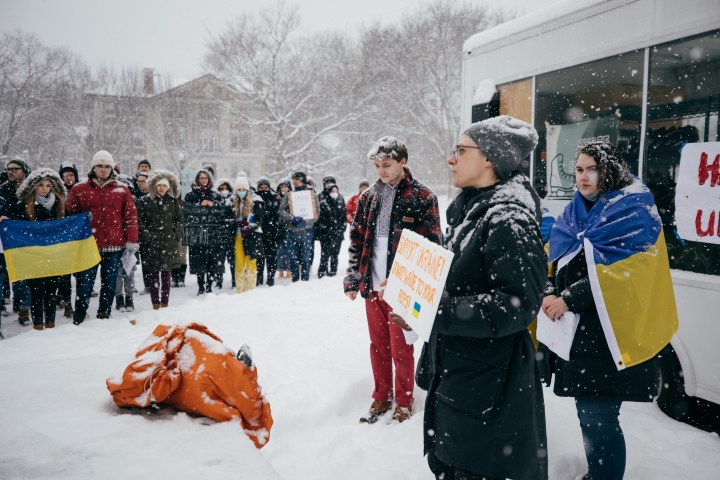 Speaking to the crowd are, from left, Nathan Syvash ’25, a Ukrainian citizen; Associate Professor of German Studies Yuliya Komska; and Yevheniia Dubrova ’24, who is also Ukrainian. (Photo by Robert Gill)
2/25/2022
More Reading

Experts across campus are weighing in, as are people with family ties to the two countries. And a rally to show support for Ukraine is scheduled for 4 p.m. today on the Green.

Svetlana Grushina
Senior lecturer in speech, Institute for Writing and Rhetoric
The Russian invasion of Ukraine is a night terror interlaced with jagged edges of broken glass. Broken lives. There’s no waking up.

I am from Russia; my maternal grandmother was Ukrainian. So many Russian people, like my family, have deep ties to Ukraine and love this beautiful country. Our hearts are broken. My “motherland” is attacking my mother’s land. It is an unconscionable, awful act of senseless aggression. I feel grief, anger, shame, sorrow, fear, anxiety, and guilt. I stand with Ukraine.

Yuliya Komska
Associate professor of German studies
Having relatives, friends, and former students in Ukraine makes it difficult to speak at a remove. Russia’s war on Ukraine, aimed at destroying everything that makes Ukraine different from Russia—and especially, everything that makes it a democracy—feels surreal. You can notice the attack’s perverse logic, and you may have even reckoned with its possibility, and yet the fact that it is happening is quite hard to grasp. While I am not optimistic in the short run, I will say this: The ability of Ukrainians to keep fighting depends on continued support from abroad. This support can take many forms, but it needs to be consistent and include support for the insurgency, if it comes to that. This is what the Ukrainians want, and there can be no confusion about it. Right now, everyone’s eyes are on the news. But if we’ve learned anything from the war that had started in 2014, it’s that the “Ukraine fatigue” sets in fast, and with it comes the sense of having been abandoned. The U.S. in particular has never maintained a strong interest in the region, and many Americans do not feel that it matters to them personally or politically. But there are no disposable democracies, and so as prices rise and outrage begins to flag, this will be crucial to keep in mind.

Some foreign policy observers worry that what we are seeing in the Ukraine is an echo of the crises that preceded World War II. Some people compare the West’s unwillingness to defend Ukraine militarily today to the British and French unwillingness to protect Czechoslovakia from Germany in 1938. The so-called “Lessons of Munich” are being used to criticize the Biden administration, and to argue for a stronger NATO military response to the Russian attack.

The better historical analogy, however, is to 1956 or 1968—two instances in which the former Soviet Union used force against its own allies to prevent them from drifting away from the Soviet sphere. There are differences between those cases and the present one, of course. Ukraine, today, is no ally of Russia. But Russia’s attack on Ukraine, like the Soviet attacks on Hungary (1956) and on Czechoslovakia (1968), are symptoms of Russian fear and decline, not of Russian power. Russia is afraid that its neighbor is drifting into the orbit of Russia’s enemies (NATO and the European Union).

Reframing the crisis in this manner offers a glimmer of good news. Putin is no Hitler, and Russia lacks Nazi Germany’s military power. The coming months will certainly be terrible for Ukraine, but we shouldn’t be too surprised that a strong and proud country like Russia objects to the United States and Europe extending their military alliance right up to the Russian border. Perhaps the eventual costs of this war will topple Putin’s regime, or perhaps Russia will succeed and ensure that their near-abroad is not all allied against Moscow. But what we see in Europe is not, it seems, the emergence of a new, authoritarian military power, but the decline of an old one.

The faculty of the Department of Russian Language and Literature at Dartmouth College condemns Russia’s aggression against Ukraine which began in 2014 with the annexation of Crimea and has been escalated with Russia’s launching a large-scale invasion of Ukraine and a series of attacks on Ukrainian cities.

It is our professional duty as scholars of Russian, Ukrainian and Eastern European languages, cultures, and literatures, to expose the false and ahistorical narrative used by the Russian regime to justify its aggression against Ukraine. We assert our full support for Ukraine’s sovereignty, independence, and territorial integrity within its internationally recognized borders.

We also acknowledge that the criminal actions of the current Russian government do not express the will of all Russian people and support anti-war demonstrators in Russia who are being detained and persecuted for their public statements against the war.

We express solidarity with Dartmouth students from Ukraine and those with Ukrainian heritage for whom these latest developments are particularly devastating. Please know that we share your anguish and are here to offer support. We also welcome all Dartmouth students interested in the situation to reach out to us for conversation and reliable sources to understand and follow the events that are currently unfolding.

Sean Smith
Professor of computer science and interim director of the Institute for Security, Technology and Society

However, due the nature of cyberwarfare, it can be hard to determine with certainty who is launching the attacks. Most believe that the Russians were behind the 2014 attack in Ukraine, and that the U.S. and Israel were behind Stuxnet in Iran, but formal discussions still need to include that caveat.

It would be natural to expect significant cyber components to the current conflict, against any potential player involved, including Ukraine, Russia, and NATO nations. Some analysts have long noted the asymmetric nature of cyberattacks--the attacker can not only be hidden, but can also have significantly less kinetic power and be significantly less susceptible to kinetic responses. If Ukraine turns into a long guerilla war, it will be interesting to see if this asymmetry surfaces.

Russia’s actions are indefensible, and a direct challenge to all nations who believe in national sovereignty and the rule of law, as well as a threat to the people of Ukraine who will bear the brunt of this attack.

Over the last three days, I slept less than eight hours in total. Every 10 minutes, there’s new information about bombing, Russian soldiers, and tanks entering more and more cities. Yesterday, other Ukrainians and I couldn’t finish infographics about the situation because every five or so minutes, we had a new strategy to include. I live in a small town in Northern Ukraine, close to the Ukraine-Belarus border. A day before the invasion, my family were already discussing how to use Molotov cocktails against tanks, just in case. We already knew it would eventually happen, but we never thought it would start at 5 a.m., about 12 hours after we had talked. My family woke up from explosions. Russian forces targeted the nearby hydroelectric station, and they missed, destroying a local park instead. Other places in Ukraine weren’t that lucky.

The Russian army targets all means of transportation, primarily civilian airports, communication, energy, and health care, including civilian hospitals. Putin is committing wars against humanity, and Europe is silent. European condemnations and words of sorrow wouldn’t bring my people back from the grave. We don’t need pity. Ukraine is the first frontier of European and NATO’s security and peace, and we expect sanctions, including cutting Russia from SWIFT (the worldwide financial banking message system) and protecting our sky from the rockets. Instead, the U.N. Security Council’s lack of response is a pinnacle of cowardness. Please, talk to your government, reach out to your representatives, and demand action against the Kremlin: it takes 10 minutes to send a simple email and may save someone’s life.

Words cannot describe how heartbreaking and terrifying these past few days have been. Our families woke up on Thursday morning to intense shelling and missile attacks from the Russian troops. The towns all over Ukraine are bombed; civilians, including children, are dying; and horrible war crimes are committed as Russia attacks residential neighborhoods, kindergartens, and hospitals.

My parents are in eastern Ukraine near the border with Russia, and their puppet governments there are forcing all men to mobilize and fight against Ukraine. Separatists are just taking men from the streets and sending them right to the front line without any training; many of our family friends were taken that way, and we have no clue what’s happening to them. In Ukraine, civilians are taking up arms and making Molotov cocktails to defend themselves and their children against Russian tanks and the army.

But Ukrainians are as united as ever, and we are all trying to support our army in whatever way we can. We ask the rest of the world to help us by donating to the Ukrainian army funds, contacting your senators and pleading for a no-fly zone over Ukraine. None of us can believe that what’s happening at home right now is real, but it is, and we must act now.

Putin’s rationalizations for the invasion rest on an extraordinarily distorted, revisionist account of the history of Russia and Ukraine going back centuries. While it is based on a master narrative founded on very real concerns over foreign aggression against Russia—from the Mongol Golden Horde to Napoleon to the Nazis —and a debate can be had over whether western leaders could have more carefully taken Russian security concerns into account during the expansion of NATO in the late ’90s and 2000s, the claims that Ukraine does not and should not even exist are entirely specious, and its use as one of the justifications for invasion is despicable. Putin’s claim that Ukraine as a territorial entity was an artificial creation of Lenin and the early Bolshevik leadership is also erroneous; after the 1917 revolutions, the Russian Empire began to disintegrate, and Ukraine—because of the by-now well-developed national consciousness at least among educated Ukrainians—was one of a number of places to declare its independence.

The Soviet victory in the Russian Civil War made this independence short-lived, but Lenin was enough of a pragmatist to understand that some recognition was necessary, and therefore the Union of Soviet Socialist Republics was formed, with the Ukrainian SSR among its original members. But more importantly than any of this is the fact that Ukraine has been an independent country for more than 30 years, and the vast majority of its citizens—even many of those whose first language is Russian—consider themselves to be Ukrainians.

Knowing that abortion bans will lead to more infant abandonment, we set out to understand how safe havens work. We found chaos.