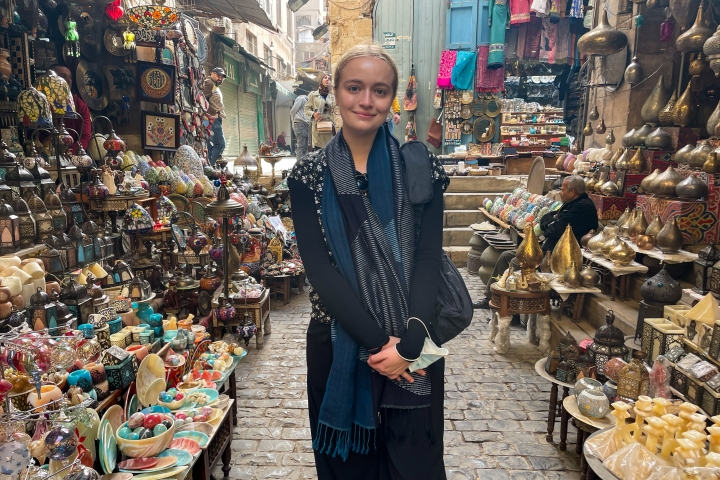 When Eliza Helmers ’22 began planning her senior honors thesis, which explores multiple perceptions of Egyptian Jews, past and present, she knew she would need not just a good library, but a passport.

“I really wanted to go to the place that I was writing about, because it’s not easy to study an issue when you are halfway across the world,” she says.

So, thanks to funding from the Jewish Studies Program and the Leslie Center for the Humanities, Helmers traveled to Cairo and Alexandria between Thanksgiving and the start of winter term to learn about the everyday lives of Jews living in those cities amid complex political realities. Egypt has a population of more than 102 million, and about 90% are Sunni Muslim, according to the U.S. State Department.

“At its height, in 1948, the Egyptian Jewish community was about 80,000 people,” says Helmers. “But after the founding of Israel, the state turned against its Jewish minority and the community dwindled over the next several decades as a result of emigration and expulsion triggered by state-sponsored discrimination. Estimates vary, but today there are about 12 community members left, and the youngest is Magda Haroun, who is in her 70s.”

Helmers interviewed Haroun, among other members of the small Jewish community. She also visited Jewish monuments and museums that the Egyptian government is taking highly publicized steps to renovate and restore. That’s where she witnessed a disconnect between how the government is framing Jewish history and the lived experience of Jews as a cultural and religious minority.

A lot of the access to these synagogues is incredibly restricted.

“Synagogues all over the country for years had been abandoned and falling apart. And now suddenly the Egyptian government is investing millions of dollars into renovating them,” says Helmers. “But one of the things that I saw, which I really wouldn’t have known unless I had been there, was that a lot of the access to these synagogues is incredibly restricted. They have these lavish ceremonies where they invite photographers and dignitaries and politicians, and it is highly publicized. But then it ends. The cameras are shut off and a lot of these monuments go into lockdown.”

Helmers is also viewing both the past and present of the region through a third prism: the attitudes of Jews who have fled Egypt.

“One of the diaspora organizations is called The Historical Society of Jews from Egypt, and it’s explicitly laid out in their website that they are not calling themselves ‘Egyptian Jews.’ They are ‘Jews from Egypt,’ ” says Helmers. “Whereas Magda Haroun has said that she is first Egyptian and then she is Jewish. I’m exploring these complex identities and trying to unpack this tension.”

Helmers’ thesis advisor, Andrew Simon, a historian of media, popular culture, and the modern Middle East and a lecturer and research associate in the Jewish Studies Program, says the depth and quality of her fieldwork is “exceedingly rare” for an undergraduate.

“That type of ethnographic research is much more along the lines of the work that a doctoral student would be doing for a dissertation. And all that material has enabled Eliza to craft a very original argument, because she has essentially created her own archive, rather than relying solely on secondary materials or what other scholars have said before her.”

But Simon’s own scholarship has also shaped hers, Helmers says. She was originally a biology major, but after she took Simon’s courses, she redirected her focus to Jewish studies, turning to Simon for practical as well as intellectual guidance.

“Professor Simon was a fellow at the Center for Arabic Study Abroad in Cairo, and I knew that he was quite familiar with Egypt and still had connections and professors and friends that he could introduce me to,” Helmers says.

She also had help from Ezzedine Fishere, an internationally known Egyptian writer and former diplomat and a senior lecturer in the Middle Eastern Studies Program.

“He was able to put me in contact with people who are in a somewhat delicate position and at times are not very willing to speak to outsiders, especially to researchers,” says Helmers.

“One major takeaway for me from this project is the importance of fieldwork. What people or governments publicize is not always what you find on the ground. I’ve been looking at really complex identities that are multilayered. And I’m trying to understand why people view these identities as opposite, contradictory, or in tension with each other. Many carry with them a lot of personal tragedy.”

After graduation, Helmers plans to participate in language study programs in Morocco and Jordan before pursuing a master’s degree in Middle Eastern studies. 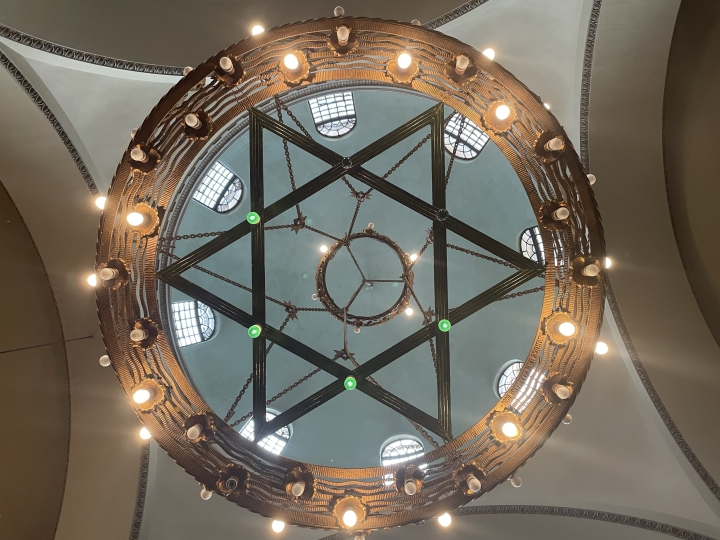 A Star of David at the Sha’ar HaShamayim Synagogue in Cairo on December 11. (Photo by Eliza Helmers ’22)
Written by
Charlotte Albright
Share this
FacebookTwitterEmail
Photos